Every year for the past 17 years (with the exception of “the year of the COVID”), around the end of April, I go to visit my brother…because family is important. I also fence judge cross country at Land Rover, née Rolex. The situation works well: I see family, I drink bourbon, and I get to watch the most talented athletes in the world, both equine and human, navigate MY fence. Normally, I watch both days of dressage and the stadium jumping, too; it’s like my own personal clinic.

So you know that I was over the moon when I found that immediately after LRK3DE William Fox-Pitt was coming to the incredible RockGate Equestrian Center in Texas to offer a three-day clinic: a day of semi-private dressage lessons, a day of cross country schooling, and a day of stadium jumping. I opted to audit all three days, and what follows are my notes put into consumable form. This is the first of three parts in this series. 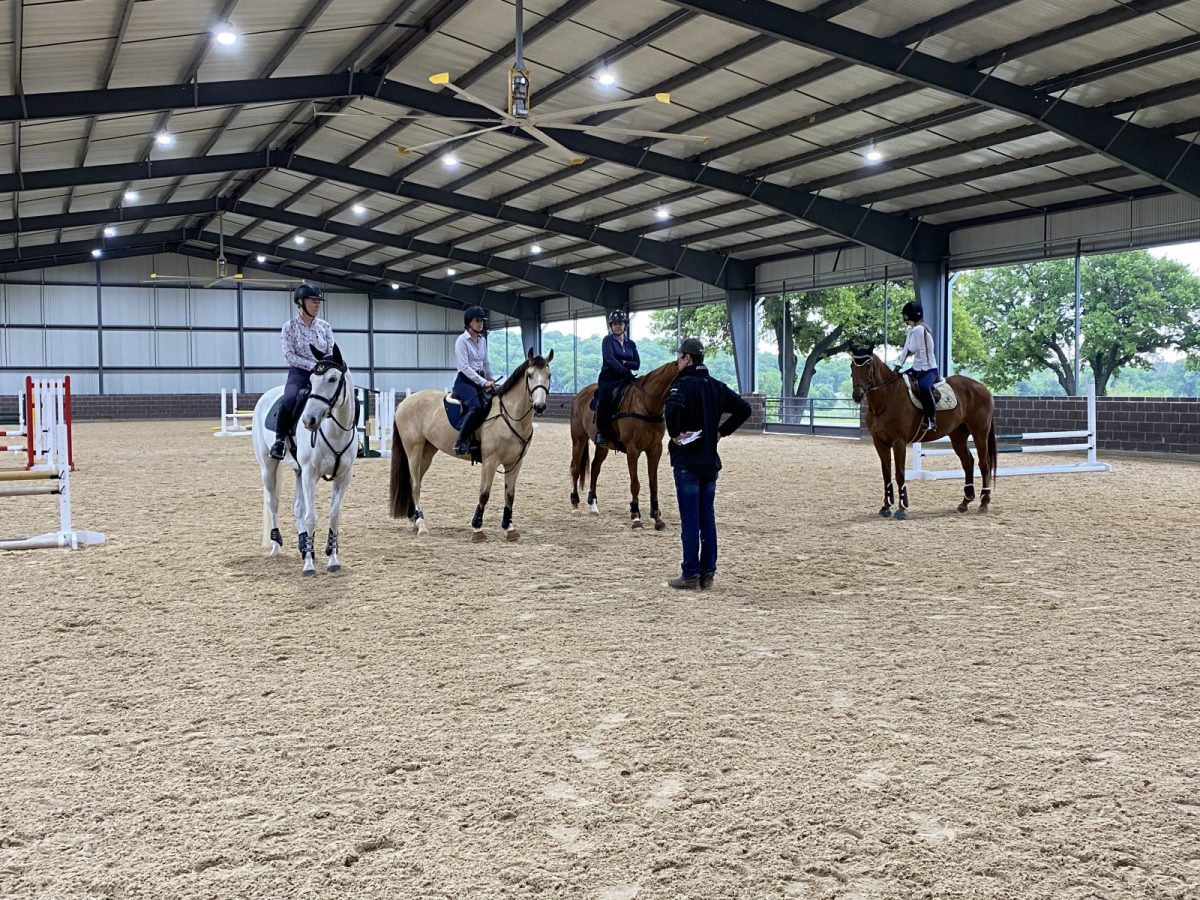 Day 1 – Dressage: Routine and Connection
“The horse world revolves around connection, no matter what discipline.”

Horses like routines. William likes to work his horses in three stages, each one lasting about 10 minutes:

With each group, from Starter to Preliminary, he asked them to follow this procedure. He reminded the riders to think about their position in all stages. YOU have to be centered for your horse to be. At events, especially, riders tend to get their horses connected too quickly because they want to look good. He encouraged riders to start out cantering in a light/half seat. It’s good for the horse’s back, and it gets the rider’s weight into the heels, and gets the rider straight and relaxed. Most horses move better after a canter, too.

As horses entered into stage two – the suppling and listening stage – he encouraged them to start out in walk. He made a comment like this one to several riders: “He’s no longer freewheeling. You are in charge. Do you want to go forward? Come back? YOU determine what the horse is doing at this stage.”

Several riders had to be reminded not to focus too much on “hand and head” — their hands and the horse’s head. “That’s not where riding starts.” He put the emphasis on seat and leg, with hands there to control shoulders. 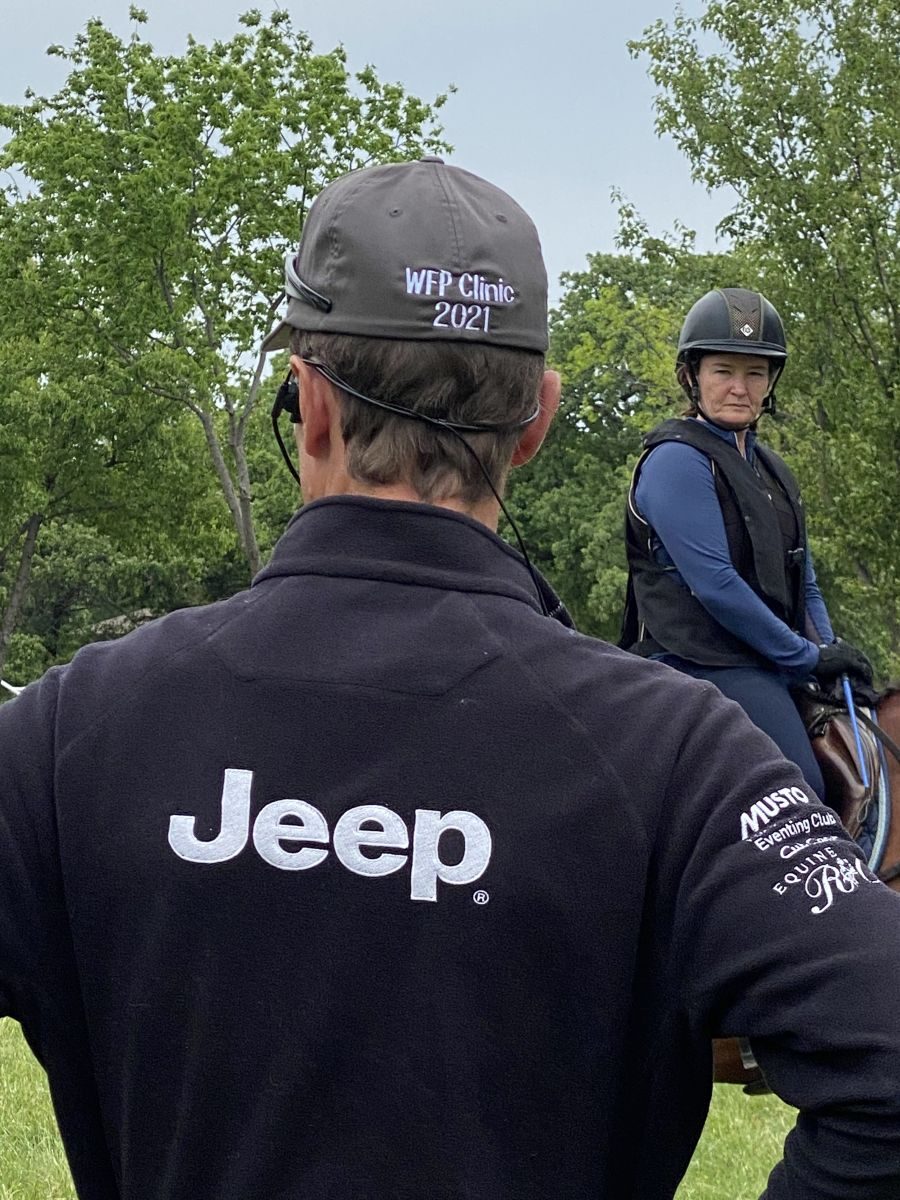 Three…two…one…Contact! William noted that contact is different for every horse, but ultimately, you need an elastic contact. He often stopped riders to illustrate what he meant by this term, asking them to hold the reins while he pulled on them. The riders who didn’t move elastically from their shoulder had to do it again and again until they did, because inconsistent contact was caused by stiff arms. He wanted them to have an elastic feel from their shoulder to the horse’s mouth (“like a good handshake — not a knuckle-crusher or a wet one”). The horse is carrying the weight of your arms in his mouth. “Connection is a corner we cut. We want them to look pretty. But he’s carrying your arm for you.”

When you’re in stage two, you can overbend, but the contact HAS to stay the same. Contact comes before the “outline”. It helps to have hands in front of the withers, because the lower you get, the more you’re likely to be stiff and/or pull. He told one rider to “imagine every time your hands come back to the top of your fluffy pad you get a shock!”

Transitions helped many riders achieve more “through-ness,” but they had to be GOOD transitions; William told one rider to do more, because her horse is “not allowed to go like a camel”. While in connection, the rider can’t be constantly fiddling with the reins. “Don’t complicate your hands — use your legs!” But your hands can’t be “silent” either; horses like a dialog, but don’t shout. You only have to use your fingers to talk with him.

Accuracy is Always the Rider’s Fault. As riders entered into the third stage – the “Spit and Polish” stage – he encouraged them to “look like you want to be judged”. Here he got picky with the riders. For instance, several riders rode “casual corners”. He chided them not to miss the corners because “you don’t want to be bothered” because it teaches the horses a bad habit — horses are, after all, creatures of habit, and if they get used to going into/using their corners, they’ll do it more effectively in a test.

“If I’m sitting at C, I ought to be able to tell whether you’re doing a 20-meter circle or going into a corner,” William said. “When you’re coming around from C, your horse should be straight when his head gets to H when walking, when your stirrups get to H when trotting, and when his tail gets to H when cantering.”

He also worked on 20-meter circles with several riders. “A circle has no straight lines. Too many people ride squares with rounded corners.” Most riders didn’t know where their horse would come to the rail or hit the center line when circling 20 meters at C. Even at the event formerly known as Rolex, he was amazed by how many riders weren’t accurate in their circles. “Make a plan, and think about what you are doing!”

He made all the riders trot down centerline. Several he made do walk/trot/walk/halt transition because they were having trouble with the halt. “If your horse steps back in the halt, the best score you can get is a 5. Don’t do that.”

Some quotes to remember from dressage day:

“Sit tall. Imagine you’re hung down from a string in the sky.”

“Don’t let your elbows flap in the wind. Use your core.”

“You are not in an armchair, you are RIDING. Core!”

(after a bad transition) “Do it again! That was hollow and useless!”

“Horses are simple creatures of habit—they are reassured by habit.”

“We all think about pulling the head in, but we have to RIDE the head in.”

“If you are rising trot and you sit before walk, you tense your horse’s back. Slow the trot, then walk or halt.”

“Because you are kind to her, she fills up spaces with her own agenda.”

“Don’t pick up the reins before you kick.”

“You’re controlling him! He can’t ad lib it!”

“Sometimes a nice friendly kick will go a long way.”

“He’s just taking the Mickey. Give him a kick.”

“Why aren’t you kicking?! You sat there like a lemon!”