Following his acclaimed seven-part series on fitness, William Micklem returns with his latest column on coaching. Click here to read all of William’s guest columns for EN. Many thanks to William for writing, and thanks for reading. 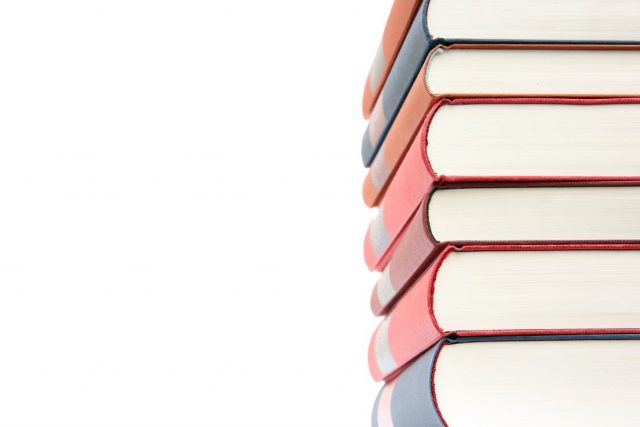 Chris Bartle said this recently about training: “We all know there are three ways to train. One is to tell and they do, like you teach kids. Then you have the show and copy system, you show them how to do it or they watch someone else do it and they try to copy. Then the other important way of learning is experimenting — you’ve got to let rider experiment and try and not be afraid of making a mistake.”

In my coaching book I would actually suggest that all three ways are required, even for children and novice students. It fits in 100% with that very old and well- tested coaching acronym for coaching all new skills, IDEA — I for introduction, D for demonstration, E for explanation, and A for action, when experimentation and learning from mistakes should be encouraged from the beginning.

However there is another important way to learn, which is by being told stories. All students need to remember things and nothing makes things more memorable than stories. Even those who specialize in memory feats use stories to make this possible.

It strikes me that probably the most powerful and influential coaches in the world are those that can tell stories. Stories that bring the great riders and great competitions to life, stories that link the masters of the past with modern masters, and stories that link the great competitors of different generations. Unfortunately for these storytellers a little age is a prerequisite for this role! But age by itself is not enough to join this club. They must also have studied their subject so they can understand the context and nuances of what they have seen. I am aware of three outstanding current members of this select club in the USA: Jimmy Wofford, George Morris and Denny Emerson.

They can bring the experience of multiple Olympic Games and Championships to the table, combined with hundreds of hours of watching leading riders in training. They have ‘touched’ the world of Chamberlin, Littauer, De Nemethy and Le Goff, they have studied great coaches from other sports, and they know all about the genius of trainers who most others have forgotten, like the West Coast’s Jimmy Williams. This gives their stories special value, and behind every story is a lesson. Lessons that are integral to them being world class exceptional coaches … exceptional coaches that should be treasured and remembered in the stories of the next generation of top coaches.

It is a continuum, but a continuum that is in danger of breaking down in this electronic world of written googled information and bullet points, that are all filed away and forgotten about in the absence of stories on which to hang the lessons. Yet these stories are vital because the coach’s task is to make the theoretical real, and that comes from sharing personal experience.

I am now going to make one of those jumps in logic and suggest that the power of storytelling is just as important for all coaches at all other levels, no matter the level of the student. If we all gather our own book of stories we can all substantially increase the effectiveness of our coaching.

Let me tell you a story: It is about the day Christine Manhire went water skiing. Christine was a Cornish equestrian gem. A dedicated ‘work with horses because I love them’ lady. At the stage of her life in this story she was also of fairly solid stature, largely due to the production of a large family. But she was a vital stable management cog in my Father’s small yard in Cornwall, the bottom corner of England. As we had no indoor or outdoor arena the winter weather sometimes made our small fields too muddy for lungeing, so he would head to a local flat beach on the north coast with a load of horses and ponies in his rattling cattle truck.

One such day Christine was tasked with lungeing my spirited pony mare, Charlie’s Aunt. Some might say that lungeing on a windy day on a fairly wide expanse of beach, even though the tide was in, was asking for trouble, but we’ll let that thought go for the moment. Of course the inevitable happened and Charlie’s Aunt gave a buck and a pull and galloped off towards the sea. Unfortunately Christine got tangled in the rope, fairly soon lost her balance and proceeded to follow the mare into the sea. On the way home she contended that she was just determined not to let go of Charlie’s Aunt, but whatever the reason she rose to the surface and became an early exponent of horse skiing, albeit lying flat on her tummy! 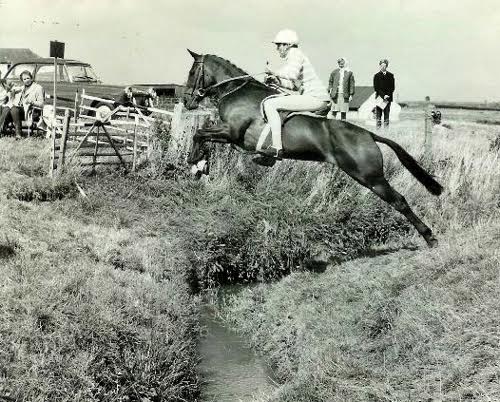 Caption: How ditches should be jumped! Riding my favourite pony Charlie’s Aunt at the Pony Club Championships in 1967 on Cheltenham racecourse. Best boy that year was Richard Walker on Plucky Pasha, who won Badminton two years later. My brother Charlie was second and I was third. Photo courtesy of William

Christine survived and continued working for my father, possibly proving an excessive love of horses, while my father often repeated this cautionary story, complete with great chuckles, as he warned us about the dangers of not organizing the lunge rope in a safe manner. It is a story I never forget as each time I carefully wind my lunge rope for use, and it is a story I now in turn relate to my students.

I would also tell my student coaches that great stories and lessons can come from the most unexpected situations and contacts. As an example about four years ago my interest in Thoroughbred breeding opened up a communication with ‘Vineyridge’, a regular and perceptive contributor to the COTH forums.

As a result I was subsequently introduced by Vineyridge to the US Cavalry Training Manual, which was written in 1935, and in particular to one hugely important quotation from this manual: “In the training of remounts, great attention should be paid, first, to their conditioning; and second to their tranquility; third to their training, properly speaking. Any system of training that neglects the conditioning or which destroys the tranquility of horses, is defective.” (The emphasis on the final sentence is included in the Manual.)

Apart from the reminder that tranquility is a wonderful word we should use more often, there are two key lessons here: Firstly the confirmation of the absolutely fundamental need to ensure the ongoing tranquility of horses as a training priority; and secondly, and probably the most important, the need for coaches to respect others and to listen to their stories. Then we give ourselves the chance of standing on the shoulders of giants, and there will be less need to keep re-inventing the training wheel … and our great stories will live on.

The US Cavalry Training Manual was largely written by Brigadier General Harry Dwight Chamberlin, who represented the USA in the Los Angeles Olympics of 1932 in both Eventing and Show Jumping, winning Gold and Silver medals. Also on that show jumping team was Col. John W Wofford who was taught by Chamberlin and went on to coach both eventers and show jumpers at the 1952 Olympic Games in Helksinki. Col Wofford’s youngest son and arguably his best student is none other than the extraordinary Jimmy Wofford! We should listen more closely to his stories.

On the gold medal winning British show jumping team in 1952 was Harry Llewellyn, riding the legendary 3/4 TB foxhunter, who my father sold on from his yard in Buckinghamshire just after the second world war before he moved to Cornwall! My exposure to such stories as a child sparked my interest in high-level competition work and how their success was achieved. And without doubt all young competition riders today should be exposed to greatness as soon as possible.

Two other points of interest about the Helsinki Games: It was actually the first time women were allowed to compete in equestrian events, although only in dressage, as show jumping and eventing were considered too dangerous for women! However to test the stamina of riders and horses the dressage test was 15 minutes long! Meanwhile the eventing individual gold medal was won by Sweden’s Hans von Blixen-Finecke, who was Chris Bartle’s main coach for many years. When Hans retired he went to live in Cornwall, near the very beach where Christine Manhire went water skiing!

Han’s own father won an individual bronze medal in 1912 in dressage. Although the dressage test differed from the current format in that it did not include movements such as piaffe and passage, but required five jumps up to 1.10 meters in height and a final mandatory obstacle, a barrel that had to be jumped while it was rolled towards the horse! Riders could also garner bonus points for riding with one hand. To further extend the story Han’s aunt was Karen von Blixen-Finecke, better known by her nom de plume of Isak Dinesen, under which she was a well-known author, especially for her work, Out of Africa, which became a popular movie in 1985.

Seventh in the eventing in Helsinki in 1952 was the youngest member of the British Team, 25-year-old Bertie Hill from Devon, who rode his first winner in a point-to-point for my father who used to do the race commentaries! In 1956 at the Stockholm Olympics Bertie Hill rode the Queen’s horse Countryman on the gold medal winning team. Countryman fell across the 22nd fence, but Bertie, saving the British team, grabbed the horse’s forelegs and shoved him over backward so that he fell into a ditch! He was then able to scramble out and resume the course. Princess Anne was just six at this time, but was probably inspired by their success to follow her own dream to ride at the highest level, and in turn inspired her own daughter Zara Tindall.