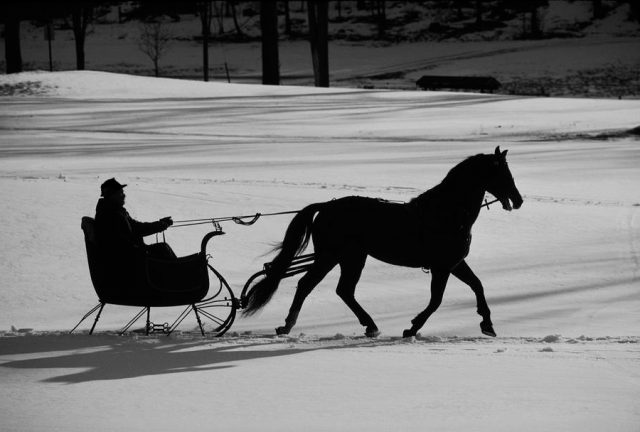 It was Jimmy Wofford who first introduced me to the idea that there are three types of riders: those that make it happen, those that wait for it to happen and those that say “what happened!” In essence this is a memory aid. There is nothing like a little fun to stimulate the brain and memory, plus it uses the magical power of three.

The power of three

Life, liberty, and happiness might very well be the most important and well-remembered words in American history, as the three inalienable rights voiced in the Declaration of Independence: life, liberty and the pursuit of happiness. It uses a grouping of three words or phrases, something that has been known to aid memory since the time of Aristotle. A Mars a day helps you Work, Rest and Play, or our horses should be Calm, Forwards and Straight. We all find it easier to remember three words.

So my coaching is laced with the magical power of three, combined with other elements to reinforce the memory. For example using the same letter. The three Fs for every riding session … Forwards, Feel and Fifth Leg; the three Ss for every coaching session … Safe, Simple and Sunny; and the three Ss for fifth leg training … Slow, Soft and Still. Or adding a new title to give added value, so calm, forwards and straight are The Three Musketeers, with their famous motto ‘All for One, and One for All,’ because they are all so interconnected.

It is true that pictures, photographs and film are worth the proverbial thousand words, and many coaches and trainers do talk far too often and far too much, but we should not make the mistake of thinking that words are not important. Words used like these groups of three, combined with short explanations, enable key words and structures to be easily remembered. Something that probably doesn’t happen with pictures. Above all it encourages simplicity, which is the most powerful training tool of all and the heart of good education and communication.

When I was about nine years old I heard some extraordinary words that made a huge impact on me and sparked my initial interest in studying horses. As a family we watched on television the Cavalcade of the Horse, under the spotlights at the Horse of the Year Show in London. All the champions from every class were gathered, from children’s ponies to heavy horses, from show jumpers to show hunters, together with carriages, and farming equipment and every manner of elegantly dressed riders and handlers.

Then Dorian Williams, the show jumping commentator, would recite this poem that was specially written for the Cavalcade by Ronald Duncan in 1954. It has become to be known as “Nobility.”

Where in this wide world can man find
Nobility without pride,
Friendship without envy,
Beauty without vanity?
Here, where grace is laced with muscle
And strength by gentleness confined
He serves without servility; he has fought without enmity.
There is nothing so powerful, nothing less violent.
There is nothing so quick, nothing more patient.
All England’s past has been born on his back,
All our history is his industry.
We are his heirs, he our inheritance,
Ladies and Gentlemen, The Horse!

In recent times the success of Michael Morpurgo’s “War Horse” as a book, stage show and film has renewed interest in the role of the horse other than in equestrian sport. So I now have added reason to try and introduce “Nobility” to new audiences, as well as a wide selection of other equestrian poetry. Certainly poetry is not to everyone’s taste but in communication surprises are good, and there is huge value in being entertaining and giving added value, especially in order to reduce tension and to make things memorable. They are also a hook from which other facts can be hung.

The first horse poem many children are introduced to is this 18th century one:

Ride a cock-horse to Banbury Cross,
To see a fine lady upon a white ‘oss;
With rings on her fingers, and bells on her toes,
She shall have music, wherever she goes.

Contrary to what we are normally told a cock-horse is not a stallion but a docked tailed horse. (One with their dock cut off, a typical thing to do at this time with driving and farm horses.) Docking their tails made the top of their tail look like a chicken’s tail end, hence ‘cock’ horse.

British children may also come across John Betjeman’s “Hunter Trials,” with this verse, best read in your finest English accent:

Oh wasn’t it naughty of Smudges?
Oh Mummy, I’m sick with disgust.
She threw me in front of the judges,
And my silly old collar-bone’s bust.

A great opportunity to talk about training and what to do if a pony stops, or how to tuck and roll when falling. Or if you like limericks, then Edward Lear is your man:

So this leads to a discussion about why a horse might rear, and how to sit and what to do. Possibly everyone could also talk about how difficult it is to fall out of an Australian stock saddle or a western saddle, and explain that Gary Cooper always said that in Westerns you were permitted to kiss your horse but never your girl!

But if you grew up in the ’70s then things were very different in terms of behaviour. Something emphasized by the first supergroup, Emerson, Lake and Palmer. Their first big song, leading to an increase in the sale of grey horses, was “Lucky Man“:

He had white horses
And ladies by the score,
All dressed in satin
And waiting by the door.
Ooh, what a lucky man he was.

Indeed, he was. One man who would have been aware of this supergroup was another Emerson, Denny Emerson … and he wrote to me recently about meeting one of the greatest poets of all time, Robert Frost.

“In 1957, at a 100-mile trail ride at the GMHA in South Woodstock, Vermont, at the end of a 40 mile day’s ride, I was on my knees in my horse’s stall, rubbing his legs, when I realized that someone was watching me over the open part of the Dutch door. I looked up, and saw that halo of white hair, and knew instantly who it was, but at age 16, I was too tongue tied to say anything!”

Denny fully appreciated the genius of Robert Frost and was well aware that his most famous poem, ‘Stopping By Woods On a Snowy Evening,’ features a horse in harness, probably in the very same Vermont woods through which Denny, now in his 80s, is still lucky enough to ride regularly. Because of its’ last verse, encouraging people not to stand still, it is one I use often in my presentations:

Whose woods these are I think I know.
His house is in the village, though;
He will not see me stopping here
To watch his woods fill up with snow.

My little horse must think it queer
To stop without a farmhouse near
Between the woods and frozen lake
The darkest evening of the year.

He gives his harness bells a shake
To ask if there is some mistake.
The only other sounds the sweep
Of easy wind and downy flake.

Denny reminded me that Robert Frost also wrote the finest lines about loving what you do, so that your love and work are as one. It’s called “Two Tramps in Mud Time.” You should read the whole poem but the key lines are these:

My object in living is to unite
My avocation and my vocation
As my two eyes make one in sight.

The one who smiles is the one worthwhile

Loving what you do is such a golden key for happy riders and happy performers. Then it is possible to cope with the inevitable ups and downs of both competition and life. Just add friendship to this and it is possible to overcome all challenges. So I always carry with me this line that I came across in a very old Pony Club coaching manual almost 50 years ago, ‘the one who smiles is the one worthwhile’. Of course the fact that it rhymes makes it even more memorable. So I will finish with another appropriate rhyming contribution from Edward Lear: