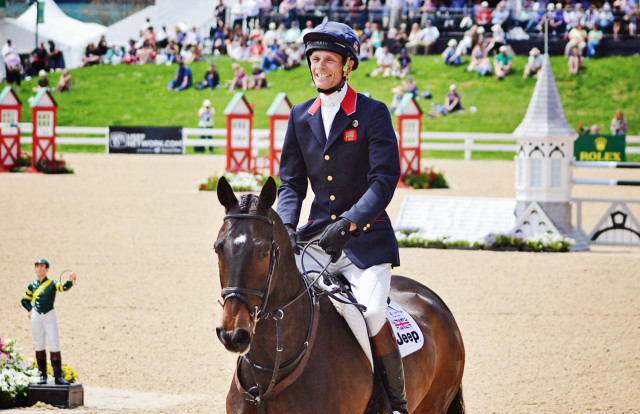 William Fox-Pitt and Bay My Hero after winning Rolex in 2014. Photo by Jenni Autry.

Sam, my son, turned to me with the most enormous smile on his face. The image of that smile has remained with me over the last year, in particular because of its timing. He smiled as he landed over the second fence of a very challenging cross country course, which had produced just one double clear after half the class had gone. It was not just any old competition but the FEI Junior European Eventing Championships in Bialy Bor, Poland, but as far as Sam was concerned he was in heaven!

For any competitor to give of their best in competition they need to be in ‘the zone,’ totally focussed on the task at hand yet sufficiently stress free and happy, as Sam was in Poland, to allow their brain to work efficiently. Unfortunately it is very common for competitors to suffer ‘brain freeze,’ or what I like to call ‘brain glue,’ as a result of being overstressed and unhappy.

The research has shown that for most of us the brain works very badly under stress, with our cognitive function being only at a level between 3% and 30% of normal. Therefore the term ‘blind panic’ is very apt when describing our reaction to an accident or when being attacked.

Stress is also the reason we so often take the wrong turn when late for an important appointment, or the mind goes blank during a presentation, or we make silly mistakes trying to finish an assignment that has to be completed in a very short space of time. And yes those regular errors of course in the dressage or show jumping also fall into this category of mindless mistakes.

To help avoid this many sports practise doing various drills under pressure. For example, pressure from other players approaching at speed, or time pressures, or pressure from noise and conflicting shouts and commands. They call this T.CUP training, which stands for Thinking Clearly Under Pressure.

It is why it is important for riders to get regular competition experience. It is also why it is important to get help from a coach who realises that their main task is to make a student independent rather than reliant, so that they can stand on their own two or six feet in competition. It is so true that the sign of a good coach is not how much they have to do for their student but how little. A chattering coach can do as much damage as a competitor with a chattering mind.

However all the T.CUP training in the world or competition work will be ineffective if the performer is not enjoying the work. They need to be ‘happy athletes’ if they are to maintain motivation and avoid anxiety, as anxiety will obviously increase rather than decrease stress. Without doubt loving the sport and one’s journey within the sport is the heart of being a ‘happy athlete.’

The fascinating thing to consider is that the term ‘happy athlete’ is the official term now used in the FEI dressage rules about horses in sport. (Article 401.1 of Object and General Principles of Dressage states: The object of Dressage is the development of the horse into a happy athlete through harmonious education.)

There certainly is no doubt that horses will also make ‘mindless mistakes’ if they are unhappy athletes, being obviously stressed and anxious. In this case to some degree they will lose their athleticism, be slower in their reactions, slower to read a situation, and quickly find they do not love what they are being asked to do. Of course all of this also increases the risk of an accident to both horse and rider.

The Yin and Yang of Happiness

So how can we move forward in our efforts to produce happy athletes? My overriding belief is that for both riders and horses the foundation for this has to be both effort and delight. They are the yin and yang of a training foundation; in other words they need each other. Effort without delight will lead to disenchantment and a mechanical approach, while delight without effort will lead to wasted time and potential and a dead end in terms of performance.

The phrase ‘training needs both effort and delight’ comes directly from the hugely successful world of Suzuki violin training. Currently there are more than a 250,000 Suzuki students being taught by over 8,000 teachers worldwide, and it is not a surprise that ‘where love is deep’ is another key phrase of this movement.

Time and time again it is proved that ‘loving what we do’ is a golden key to training. There is much truth in the phrase ‘if you love what you do you’ll never have to work another day in your life,’ but I believe that this is not the key strategy we have to focus on.

The key strategy is this: A performer needs to achieve happily rather than achieve to be happy. This makes all the difference. If life is entirely dependent on competition success or examination results then disappointment is largely inevitable.

Whatever their level all performers need to keep their achievements in context, and as is often said ‘we need to enjoy the journey, as the meaning of life is in the journey not the destination.’ It is a key part of what has become to be known as ‘mindfulness.’ However it is a mistake to think that mindfulness is only for those not interested in winning.

In tennis Novak Djokovic, the current world No. 1, has had a difficult and less successful year since winning the French Open and becoming only the third player in history to hold all four Grand Slams at the same time. What has gone wrong? He thinks he knows the answer: “I have been spending the last few months trying to regain the simple enjoyment of tennis. That is what I have to do.” This is pure mindfulness.

At the same time the bad boy of tennis, the Australian Nick Kyrios, is in the top 20 in the world but in most people’s opinions is an underachiever in terms of his talent. He continues to melt down, break rules and receive fines and a ban.

The likely answer to his difficulties was signposted by Rotterdam tournament director Richard Krajicek, when he was excused from competing in next year’s competition so that he can instead play in an All-Star Basketball weekend in the USA. “Nick prefers his passion beyond his profession,” said Krajicek, who is a former Wimbledon champion himself and knows how vital it is to be able to throw your heart into each point.

Dr. Anthony Sheldon is Headmaster of one of the UK’s most famous and successful schools, Wellington College. He is also pioneer of strategies to promote mental well-being in schools, including ‘Action for Happiness.’

He believes we need a different understanding of success: “Young people are now being brought up grasping for what they don’t have, rather than appreciating everything they already do. If we don’t act now we are likely to see increased levels of adolescent suicide and mental illness, and a culture in which taking anti-depressant drugs is the norm.” At first he was mildly mocked for his views but the overwhelmingly positive results with his students over the last five years has proved him right.

But it goes beyond that to recognise that all of us are more than just the sum of our intellectual and physical abilities. That to be contented we have to be true to ourselves, which means understanding our emotional and individual needs.

In Bronnie Ware’s inspiring book The Top Five Regrets of the Dying the number one regret is made clear by patient after patient. “I wish I had the courage to live a life true to myself, not the life others expected of me.” The lesson for us all is that there is nothing wrong with being different.

If only Nick Kyrios had been able to follow a life true to himself. “I love basketball, I don’t really like the sport of tennis that much. I don’t love it,” he says. “It was crazy when I was 14. I was all for basketball and I made the decision to play tennis. I got pushed by my parents and to this day I can still say I don’t love the sport. It is just crazy how things go. But I just love basketball, I always have.”

And of course every horse is different as well. To hear this echoed in every reported sentence offered by William Fox-Pitt in California this week does not surprise me. His training is based on this and on gaining acceptance not submission, and as a result his horses are willing, spirited and happy. “If your horse shies at something, then move a little away from it and then gradually move closer as he trusts you more. To force him to it will only create bigger problems in the future and in your relationship with him.”

And as reported in EN, ‘The idea of encouraging horses to enjoy their jobs was prevalent throughout everything William had to say; simply put, the sport is just not as enjoyable with a horse who is sour or hates the job.’

So respecting both people and horses as individuals, with individual strengths, weaknesses and needs is at the heart of producing happy athletes. It is essential with not only competitors, but also coaches, exam candidates and all those who are trying to learn and progress. Without this approach performance will always suffer.

And Sam in Poland? A great clear with just 0.4 of a time penalty to almost join the only nine double clears in 77 runners. Delighted. Still smiling! But I leave the last word and inspiration to the genius Leonard Cohen: “I studied deeply in all the great religions and philosophies of the world, but in the end cheerfulness just kept breaking through.”