We are delighted to start the new year with a series on safety in eventing from EN guest columnist William Micklem. Click here to read the first column in this series, and click here to read all of William's guest columns on EN. Many thanks to William for writing. Go Eventing. 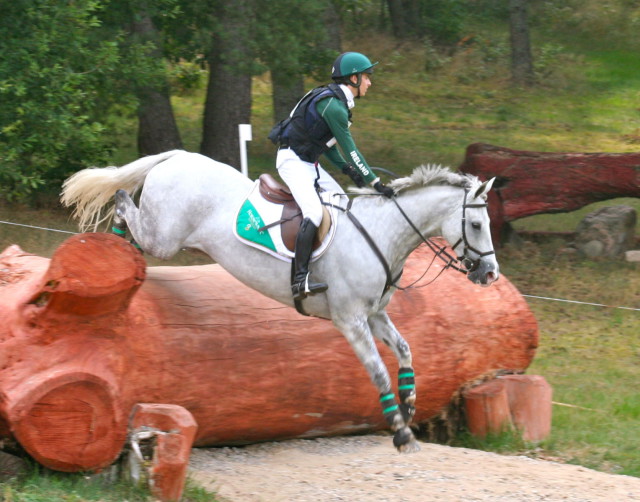 No trust, no us! Who would argue that riding is not about a partnership … and if we want partnership we need trust, so successful cross-country riding is all about trust. Your horse must trust you not to ask a question that is too difficult and the rider has to trust and allow their horse to deliver; yet if that trust is broken, both the partnership is damaged and safety is compromised. And most of us know what a lengthy and difficult process it is to rebuild trust.

There is a cute story of a little girl and her father who were crossing a bridge. The father asked his little daughter, “Sweetheart, please hold my hand so that you don’t fall into the river.” The little girl responded, “No, Dad. You hold my hand.” “What’s the difference?” asked the puzzled father. “There’s a big difference,” replied the little girl. “If I hold your hand and something happens to me, chances are that I may let your hand go. But if you hold my hand, I know for sure that no matter what happens, you will never let my hand go.”

You and your horse have to also metaphorically hold hands. You must be prepared to hold the horse’s hand and he must be prepared to give you his hand to hold, rather than the opposite way round. This means that the rider has the leadership role, the parenting role. And neither being a bully nor a timid person makes for good parenting, or a trustworthy partner. Instead a trustworthy partner often has to put the other first and always communicate honestly and respectfully.

The FEI and safety

For the sport of eventing to fulfill its potential all the stakeholders need to trust each other and sadly there is currently a lack of trust between many riders and the FEI regarding safety issues. As explained in my previous article I fully believe that good course design and construction is only part of the safety picture, but the story of our progress towards deformable fences does not paint a picture of a sport on top of this issue.

A question for you all. When were deformable fences first recommended to an official international body looking at cross country safety. (A) 7 years ago? (B) 14 years ago? (C) 17 years ago? The answer, which may surprise many, is (C). It was in 2000 and was made by David Morton to the Hartington Enquiry into Eventing Safety.

In their report, issued to the FEI on the 27th March 2000, the Hartington Enquiry unanimously recommended “urgent research into construction of deformable structures” … with the “FEI to coordinate all current and future research worldwide.”

An alternative to frangible pins

To be fair it is true that frangible pins were first introduced in 2002 in Britain, when they were trialled at nine events, including the Mitsubishi Motors Badminton Horse Trials. But thereafter progress in their development and use, particularly internationally, has been slow, and fatalities because of rotational falls have continued. However a Swedish designer, Anders Flogård and his colleague Mats Björnetun, working for the Swedish MIM company that has long been associated with safety products, were ahead of the game.

They recognised that if the prevention of rotational falls was the prime objective of deformable fences, then a solution had to be found that would respond to both horizontal and vertical forces when a horse hits a fence. (NB: The frangible pins only respond to downward vertical forces.) Their solution was the MIM clip, which had the additional advantages of use on tables and allowing fences to be quickly rebuilt.

In March 2011 I watched an explanation and demonstration at Red Hills in Tallahassee, Florida to explain how the MIM safety clip worked to reduce the risk of a rotational fall. However the MIM clip for post and rails was only finally approved by British Eventing five years later in 2016, and by the FEI for use in 2013. (The MIM wall and table kit was FEI approved in 2015.) In addition it should be understood that there is a big gap between ‘approval’ and ‘recommended use’, and even last year there was a report of the MIM being impractical for events because of expense!

The United States Eventing Association are now responding to both the research on rotational falls and the opinions of the riders and taking the extra step towards recommendation. On 17th December last year the USEA announced that it was proposing to introduce an “extraordinary” rule change to improve cross-country safety for horse and rider, with a recommendation that the front rails must be able to be lowered by horizontal and vertical downwards and upwards forces, and that the back rails must “at a minimum” be activated by horizontal and vertical downwards forces.”

This is reassuring news and it is also reassuring news that statistically eventing is getting safer, but can we do more? This is the question that will be asked at an FEI Risk Management Summit due to be held next month in Ireland, to include not only national safety officials but also athletes, coaches, course designers and technical delegates. Chaired by the very hard working David O’Connor (USA), the group has been set up to look at ways to minimise risk factors in eventing, with a focus on coordinating risk management initiatives on a global basis.

The key need is a sense of urgency so that small steps are taken immediately to improve safety in all areas, including training and riding. The relative inaction after the Hartington report in 2000 was an opportunity largely lost. Now we have another opportunity for progress. This time if all the stakeholders work together and listen to each other then mutual trust can be built and our sport become safer. We are also going to get a better understanding of the statistics and make better conclusions.

Surely there is already compelling scientific evidence and statistics, from both British Eventing and the FEI, to say that anyone connected with cross country has a duty of care to use deformable technology wherever possible to keep our riders safer. Surely we should trust our governing bodies to do this? To do more than just approve it but actively ensure it is put into practice.

The same for show jumping and eventing

Regarding safety and training my previous article on safety mentioned the connection with show jumping, and I know a number of people have questioned this, but I stand by what I said. As an example Meredith Michaels-Beerbaum has the perfect position in the second half of a jump for a cross-country drop fence. Few event riders do better. Her knee and hip joints open keeping her centre of mass over the horses centre of mass and keeping a strong lower leg position, which both keeps her safer and makes it easier for her horses to perform and turn on landing or simply be ready for the next fence.

This is also what my son Sam is showing in the main picture for this article, with the key being to open the hip and knee joints rather than sit on the back of the saddle with a floppy lower leg. (NB: The fence following this log was a skinny just eight strides away at the bottom of the hill after a 90-degree turn.)

In addition my very trustworthy friend, Paddy Hughes of Horse First, sent me an article a few days ago about the Rio Olympic show jumping silver medallist Peder Fredricson. Peder and his little horse All In have been somewhat forgotten behind the emotional gold medal success of the galloping granddad Nick Skelton, but what Peder said in this interview was pure gold for my argument regarding both the close connection between eventing and show jumping and a safer approach:

“My system is influenced by my many years in eventing, based on inviting the horses to think for themselves, in order to go fast, jump well and keep their own balance. I want a mental dialogue together with my horses. A communication where I receive questions, suggestions, initiatives, thoughts and answers so we together can make decisions. I don’t want to be the dictator telling my horse what to do, just as little as I want to do this with my kids. I’m looking for an honest relationship. A give and take, a mutual understanding, respect and trust. That to me is riding.”

Thank you, thank you Peder. But to my delight there was more! How did the interview with Peder Fredricson end but with the perfect words to link with my previous series on happiness. What better way can there be to finish any article? “Last, but not least … keep the joy of what you are doing. The most important part is to keep enjoying your life and love what you do. Happiness and love are contagious. You can’t build a happy life on success, because you won’t win every day. But you can build a happy life on happiness.”