EN is excited to bring you a new series from William Micklem: Breadth As Well As Depth. The series addresses the need for breadth in eventing education and also includes his thoughts on event horse breeding, plus gives added value from the inimitable Harry Potter. Today we bring you Part 8: The Size of the Heart – Five More Pocket Rockets. Be sure to read Part 1, Part 2, Part 3, Part 4, Part 5, Part 6, Part 7. 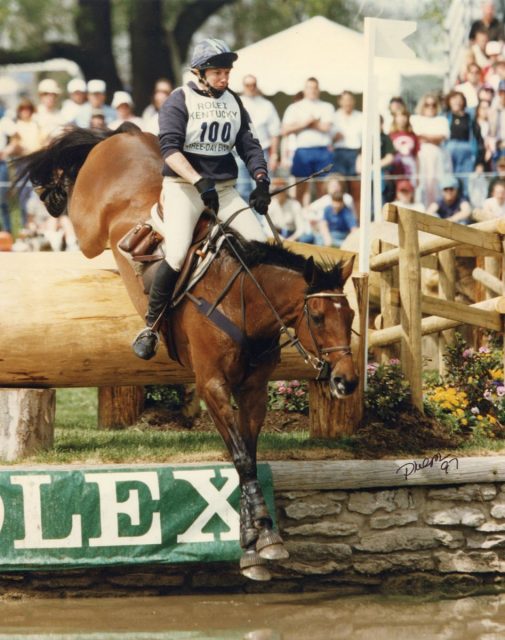 “Humph,” snorted Professor McGonagall [to Neville]. “It’s high time your grandmother learned to be proud of the grandson she’s got, rather than the one she thinks she ought to have.” The professor could say the same thing to many breeders, who are often disappointed that things haven’t quite work out as planned … the most common disappointment being a horse that is smaller than expected.

“A good looking horse but didn’t grow. Sadly just too small.” That’s what so many breeders say with a big sigh. We forget that breeding is not an exact science, the variations can be numerous, both physical and mental, even with line breeding to reduce the genetic combinations, or even with cloning. However what we should not forget is that small horses have many advantages and can still have many roads to follow and even have Olympic ability.

Some responses to my article ‘Is Size Important?’ suggested that the number of small horses in eventing was exceptional small. But a provisional look at registered FEI event horses at 3* and 4* shows that the number of horses 16.00 and under exceeds the number of horses 16.2 and over by about 6 to 1. This confirms that the smaller horse is more durable, but this ratio is likely to decrease if fewer small horse are bred in future years because of market misconceptions. However it does show a proven role for smaller horses and here are five more pocket rockets that excelled at the highest level in eventing:

Who could forget Torrance Watkins riding the little 15.1 coloured mare Poltroon with the wonderful step and perfect jumping technique? As Jimmy Wofford said, “Her ride on Poltroon really captured the general public and was one of the reasons we got more air time and changed the image of our sport.” Poltroon was by the TB Hopper’s Pride out of a pinto pony mare. In 1980 she won both Rolex and the individual bronze medal for the USA at the alternate Olympic Games in Fontainbleu, France, amazingly making her the first woman in eventing to win an Olympic individual medal. Additionally they were second at Burghley 4*.

Karen O’Connor not only rode the world’s best eventing pony Teddy O’Connor (not quite 14.2), but also the extraordinarily tough and sound TB Upstage. He was only 15.1 but he completed eight 4*s and completed Rolex six times, and is in the top twenty of all time USET points winners. Of course Karen also won Rolex on the brilliant 15.3 TB Worth The Trust, owned like Mandiba by Joan Goswell. When he won Rolex it was long format days, and he had to carry the mandatory weight of 165 lbs, yet he won on his dressage score. The year before he finished 5th, once
again on his dressage score.

Then there was one of my absolute favourites, the athletic star Sunburst, the 15.3 full TB who was ranked No 1 in the world in 1996. He and Australian Wendy Schaeffer started working together in Pony Club when Wendy was just eleven and won the famous Gawler three day event five years later. Then when Wendy was just 19 she took Sunburst to the World Equestrian Games in The Hague and placed 16th, with one of just three cross country rounds inside the time.

At Badminton in 1996 he was placed 11th, but her place in the Australian Team for the Atlanta Olympics appeared lost when she broke a leg only weeks before travelling. But held together by plates and screws, she produced a performance that no one else could match. Best of the Australians after dressage, 4th fastest clear across country and clear show jumping. Sunburst and his 21 year old rider led the Australians to back-to-back Olympic Team Gold and led the field, a feat that at previous Olympic Games would have also won him the Individual Gold, but not in Atlanta where there was a separate competition for individuals.

Finally a female pocket rocket. I can think of only five horses that have ever won three 4* competitions. Kim Severson with Winsome Adante, Michael Jung on both La Biosthetique-Sam and FischerRocana FST, Andrew Nicholson with Avebury and Lucinda Fredericks on her extraordinary mare Headley Britannia. ‘Britt’ is the first mare in this group and created a unique 4* record winning Burghley in 2006, Badminton in 2007 and Rolex in 2009. Yet she was only 15.3!

In another extraordinary triumph for Irish Draught genes both Avebury and Headley Britannia were by the Irish Draught stallion Jumbo. Although an Irish Draught Jumbo was actually 37.5% TB, so Britt was almost 70% TB as she is out of a well bred TB mare.

The good news for eventing is that Ireland is well placed to continue to produce exceptional quality event horses with great brains. We still have wonderful TB blood, with the Irish TB industry being simply a phenomenon, consistently producing more high-class steeplechasers than any country in the world. In addition, while France and the USA reduce distances and favour racing over shorter distances, Ireland and particularly the Coolmore Stud instead continue to invest in producing 2,400m – 3,200m (1.5 mile – 2 mile) flat racing horses. Steeplechase breeding remains a huge and important part of the thoroughbred breeding business and together with a thriving point-to- pointing industry makes Ireland the global leader in this area.

With some pony blood also being a valuable asset to sport horse breeding it is relevant to mention that Irish ponies are also a phenomenon, with Irish Junior show jumping riders consistently being the best mounted and most successful in the European championships. In addition the Connemara pony is the most successful pony in the world with large numbers Throughout Europe and North America, and riding across country at speed is still an Irish national passion!

The Traditional Irish Horse Association, working with Horse Sport Ireland, has made significant progress with the official and separate recognition in the registration system of the Traditional Irish Horse (TIH); and with the groundbreaking DNA work of Dr Emmeline Hill are close to being able to identify both the precise origins of the TIH and TIH horses that may not have full documentation.

They also have a development plan that will be implemented for the benefit of the TIH … and hopefully mean the production of more legendary Traditional Irish horses like the nine, out of a total of 13, in the USEA Hall of Fame: The Grasshopper, Plain Sailing, Biko, Kikenny, Custom Made, Irish Cap, Gilt Edge, The Gray Goose, and McKinlaigh.

In addition the Warmlood Studbook of Ireland (WSI), partnered with the KWPN, has a specific strategy for the production of event horses that is already up and running. They have approved three half bred event type stallions, and two years ago approved the German TB eventing stallion Asagao.  They have also approved a number of mares, including Fenyas Elegance (by Ricardo Z out of a Good Thyne TB mare), winner of three 3* competitions at Blenheim, Bramham and Ballindenisk with Ireland’s Aoife Clarke and Britains Ollie Townend, and two approved mares and a stallion from Heraldik’s direct dam line.

WSI Managing Director, Dr Thomas Reed, has consistently been pushing for specific breeding of event horses with sufficient blood. In 2015 he wrote a hard-hitting article in Horse International entitled ‘A Critical Shortage of Blood.’ It is worth quoting three sections from this article:

“We are seeing show jumping and dressage horses that look like ‘blood’ horses but are often ‘faux blood’ horses, and many of these are pointed to eventing when they fail to excel in the sport for which they were bred. But they are ill-suited for the demands of this uncompromising sport at the medium and upper levels.”

“Many horses that have no business competing on a cross-country — I call them ‘faux blood’ horses — are pointed to the sport for commercial reasons. And (as a result) too many riders and horses are perishing or suffering devastating, life-altering injuries on the cross-country without adequate policy responses from the FEI and national equestrian federations.”

More than one discipline

Dr Reed also believes in sending his horses to some of the best riders in the world as he understands that good training is the engine of the breeding world. But he actually doesn’t have to look far from Ireland for a clutch of really exciting riders.

The European Gold medal winning show jumping teams at both Junior and Senior level this year emphasize the breadth of talent available in Ireland. Additionally we have more riders than is normal in other countries competing successfully in more than one discipline. Geoff Curran, from the Irish Army Equitation School, is a regular member of our eventing championship teams rider, but loves show jumping and has won a number of big Grand Prix classes this year and was third in the Puissance at Dublin Show. His wide skill set means that if he had the horses he could be one of the most competitive event riders in the world.

We also have extraordinary young talents in Sophie Richards and Cathal Daniels. Sophie was on the Irish Team at Aachen this year but is also an outstanding rider of elite young show jumpers. The same applies to Cathal Daniels, who has been a consistent medalist at Junior and Young Rider European Championship level for the last four years on his brilliant 15.1 mare Rioghan Rua. This spring he also stormed round Badminton on her with real class and they are due to run at Burghley this week. But Cathal is also recognized as an outstanding talent in pure show jumping and was selected as part of a group of elite young jumping riders to go to Wellington on a scholarship.

Canadian Jamie Smart also proved that this multi-discipline challenge is possible. He began in show jumping, winning several Grand Prix and the Puissance at the Royal Winter Fair, then moved on to eventing. He was a member of two Canadian Olympic teams in Fontainbleau and Seoul and was a part of Gold and Silver winning Teams in the 1987 and 1991 Pan American Games. He also won the leading Foreign Rider award three times at Rolex, twice on his best known horse the huge hearted Connemara TB cross Sudden Impact, who was famous for his extraordinary extended trot with huge front leg action.

Then just this weekend Sweden’s pin up boy Peder Fredrickson won the European Senior Show Jumping Championships on All In, his Silver medallist at the Rio Olympics, having originally represented his country in eventing at the Barcelona Olympics, placing in the top fifteen. Peder is 6ft 4ins but All In is just 16 hands and 1/2 of an inch. So yet another pocket rocket with a massive heart.

What is right and what is easy

Peder is a great stylist and educated horseman. His continued success at the highest level must delight George Morris who wrote recently that horsemanship must come before dressage and dressage before jumping. However this is not an easy road to follow, but as Dumbledore said “We must all face the choice between what is right and what is easy.”

My strong belief is that the road that gives a breadth of training is vital for long lasting success, just as breeding horses with a breadth of abilities is vital for the sport horse industry, and this must include horses of all sizes. But there is also the most vital area of all where breadth is required … all will be revealed in the final article of this series next time!

Next Time: BREADTH AS WELL AS DEPTH + Lessons from Harry Potter
Part 9 – Key lessons and an Unheralded USA Superhero