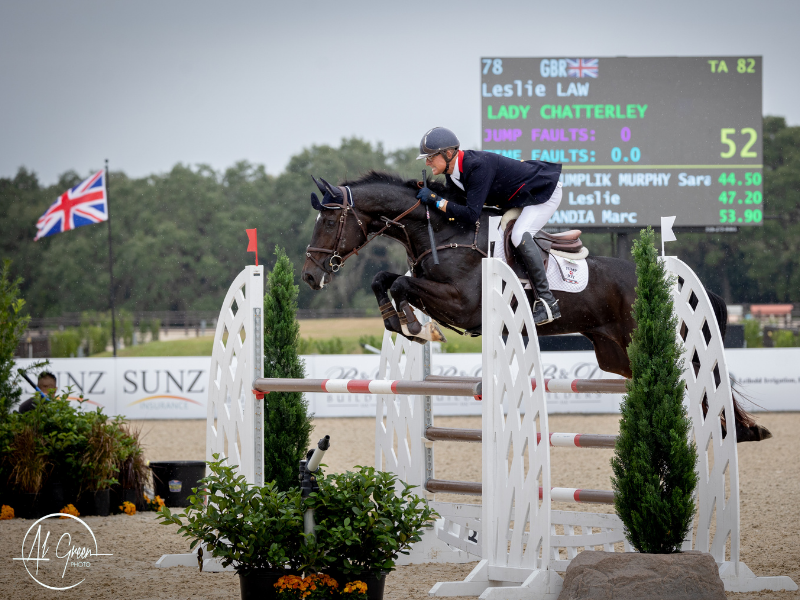 Horses and riders in 12 divisions, from Starter to CCI4*-S, tackled the show jumping phase of competition Sunday at The Event at TerraNova, over a track designed by Nick Granat in the world-class setting of the main arena. Prize money was awarded in all divisions.

The day started with a non-denominational worship service in the rider lounge. Pastor Rick Mihm led the service, offering riders a chance for quiet reflection and concluding with participants giving thanks for their blessings. Patrons and riders enjoyed gourmet fare and cocktails as part of the VIP experience in a tent pavilion overlooking the main arena. 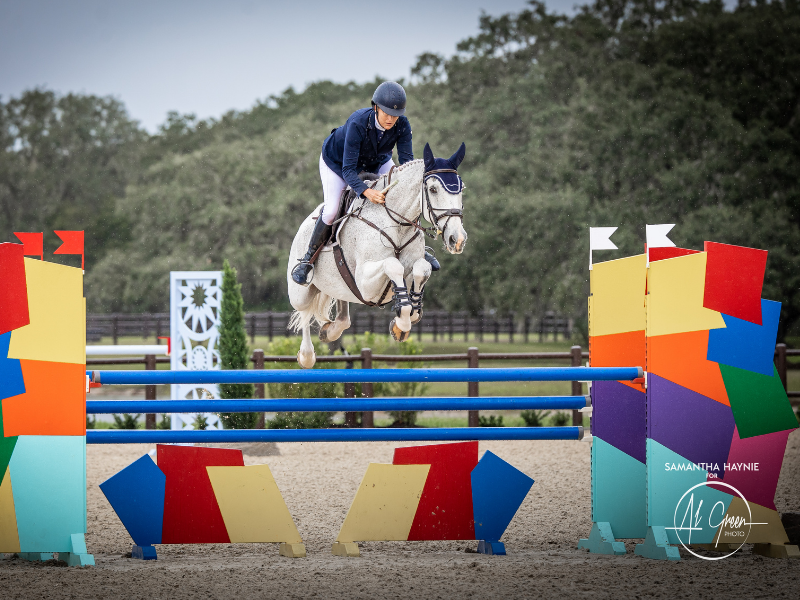 Sara Kozumplik-Murphy and Rubens D’ysieux were the second-place finishers
in the CCI4*-S. Photo by Al Green Photo.

Law said, “I thought it was a great track, it was proper show jumping. Typically Fernhill is a really good jumper and a lot of fun to ride; if you have a rail it’s your fault, really, and he jumped his skin out. Then the mare came in and she was feeling really good in her body, really loose in her back, and she came in and jumped really well. She took a hard look at the “musical” fence…so I just closed my leg and she jumped super, really.” 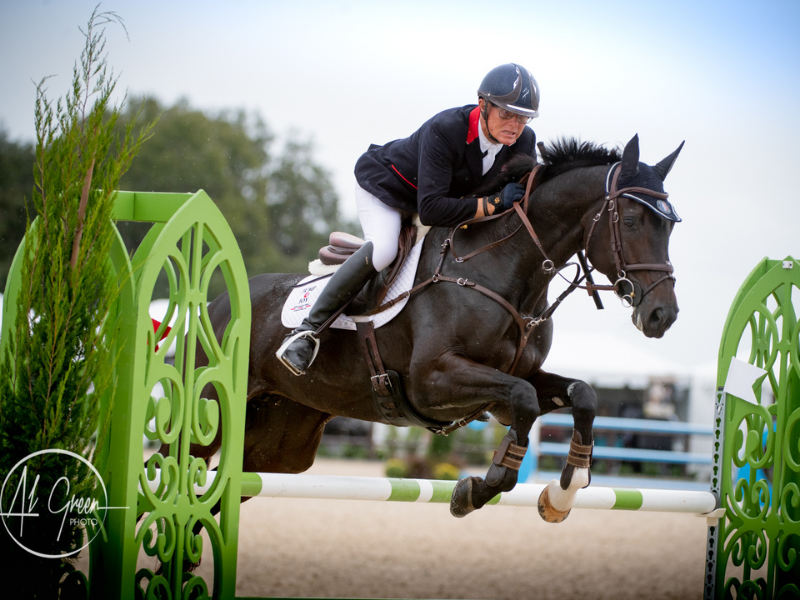 Leslie Law and Typically Fernhill were third in the CCI4*-S. Photo by Al Green Photo.

“I bought him (Shirsheen Ice) in Ireland a couple years ago and I think he’s going to be a great horse. He’s a funny lad, he has so much guts and fire and loves his cross-country. He’s 7 years old and I’ll probably move him on to a three-long after a few Intermediates. I love him to bits, he makes me laugh every day. Lesley also rode well and had a great day today, which will help the journey home!” 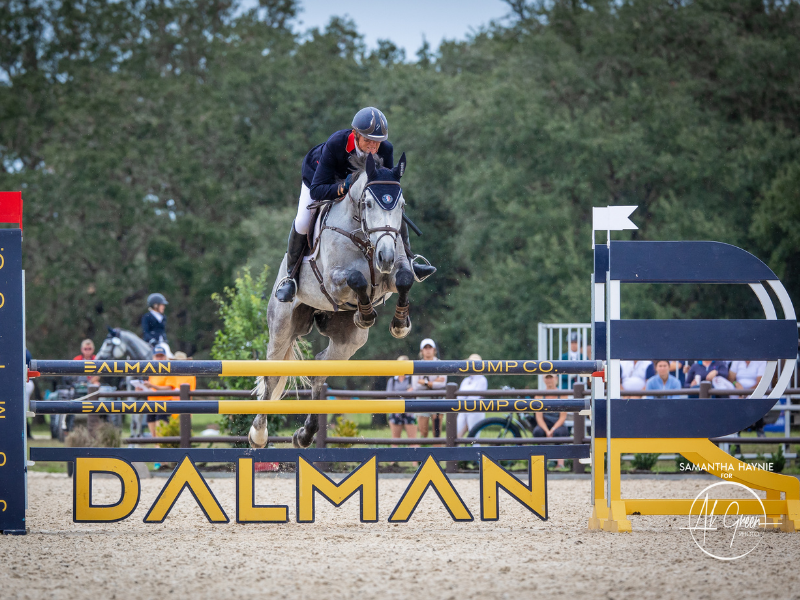 With less than a point separating the top three in the CCI3*-S, sponsored by Sunz Insurance, no one could afford a rail. All three jumped around clear and in the time, with Kozumplik-Murphy taking top honors with Devil Munchkin, a KWPN gelding (Casiro 3 x Rhona/No Ski) who she owns with longtime friend and supporter Edy Rameika (40.6). Jon Holling and Pioneer Archibald finished second with 41.2 and Elisa Wallace and Riot Gear, an Oldenburg gelding (Confetti x Lucy/Fuerst Gotthard), owned by Steve and Vicky Sukup placed third (41.4).

Kozumplik-Murphy said, “Both of my horses were fantastic today. I mean, I really can’t fault them. Rubens is a super careful jumper and I can’t remember the last time Kermit had a pole down.” She said that her husband, Irish Grand Prix show jumper Brian Murphy, coaches her in this phase. “I couldn’t ask for better eyes on the ground; he’s also great at matching people with horses. He’s a super show jumping coach, he’s changed my show jumping riding exponentially. It’s not even recognizable. I used to get quite nervous going into show jumping, it’s so nerve wracking! Though I have to say, it helps when you’re riding horses that jump like these two.” 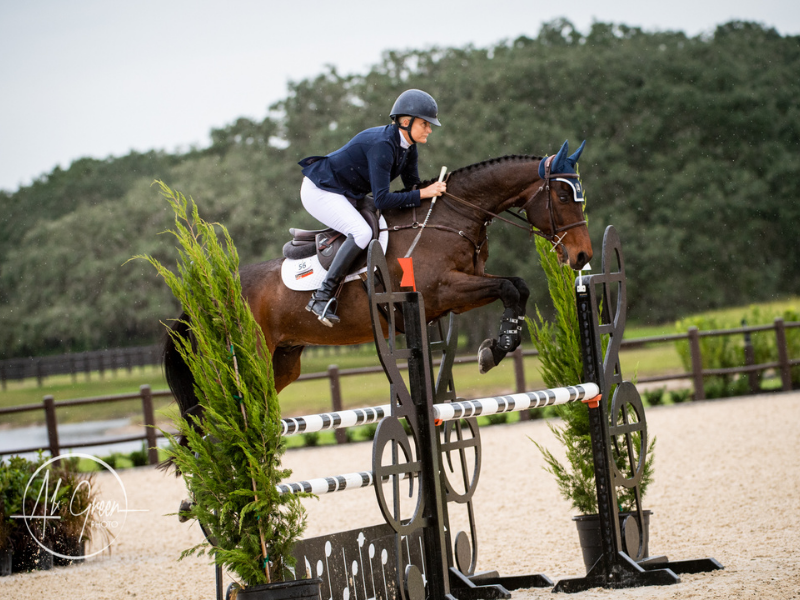 Sara Kozumplik-Murphy and Devil Munchkin were the winners of the CCI3*-S. Photo by Al Green Photo.

The show jumping courses were designed by Nick Granat, a Level 2 FEI jumping course designer who was an assistant designer of the eventing course at the 2018 Tryon World Equestrian Games with Alan Wade. This is his first solo FEI three-day event. “I just really wanted to have a course with a nice smooth line for them. I didn’t want it to be too trappy or tricky and I didn’t want to over-tax the horses since they jumped a lot of fences yesterday. It was relatively straightforward. This is a very delicate set of show jumps – we really look for light rails. 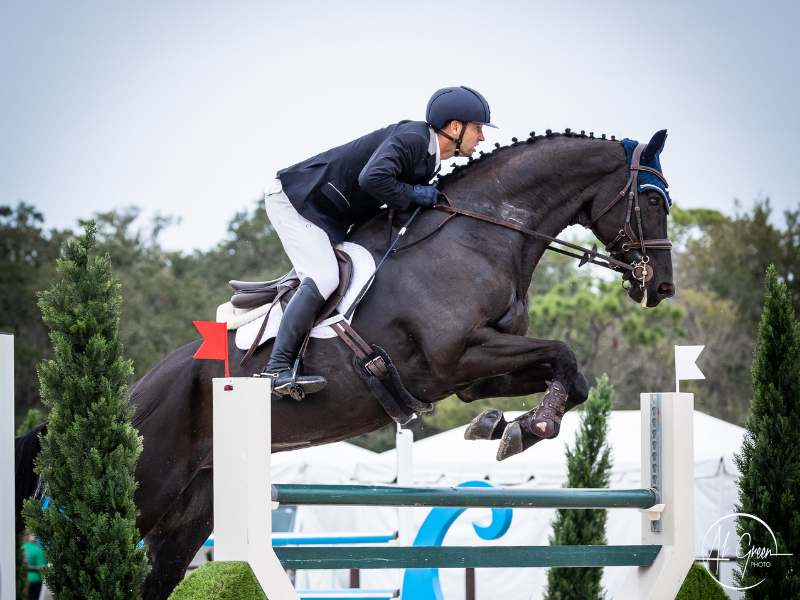 Tik Maynard (CAN) and Galileo earned the victory gallop in the CCI2*-S.
Photo by Al Green Photo.

Every rider in the competition, from Beginner Novice to the four-star level, was placed on a team representing one of three non-profit organizations. The non-profits included Southeastern Guide Dogs, Saratoga Manatee Association for Riding Therapy (SMART) and Meals on Wheels PLUS of Manatee. After points were tallied, with the lowest penalty score winning the challenge, the first-placed Southeastern Guide Dogs (1,736.50) earned $10,000, second-placed SMART (1,796.2) earned $7500 and third placed Meals on Wheels (2,283.40) earned $5,000. 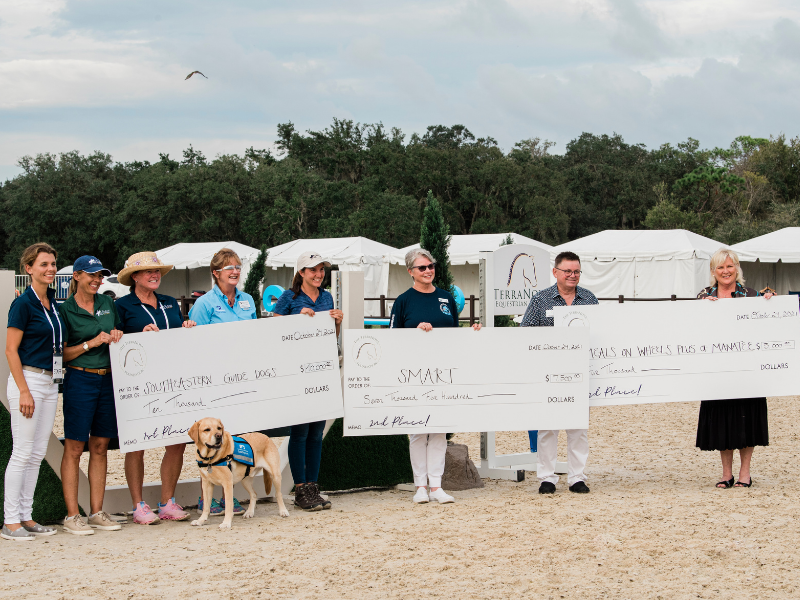 All three charities were presented checks at the end of the competition.
Photo by EQ Media.

Karen Conkel, Associate Director of Philanthropy at Southeastern Guide Dogs, said, “First of all, for this event to support local charities makes all the difference in the world. We all love animals and to serve those who cannot see, and those who have seen too much, is a blessing. We’re grateful to be here and be part of this and we’re looking forward to this happening, and many years of success here.” Conkel was joined by Ambassador therapy dog “Levi,” a yellow Labrador Retriever

The TerraNova Award
The TerraNova Award, a perpetual award recognizing community involvement and sportsmanship was awarded to Tom Berringer, a neighbor who showed up to see if they needed help and has been helping for eight days straight. Presented by Hannah Herrig-Ketelboeter and her husband Zach Ketelboeter. 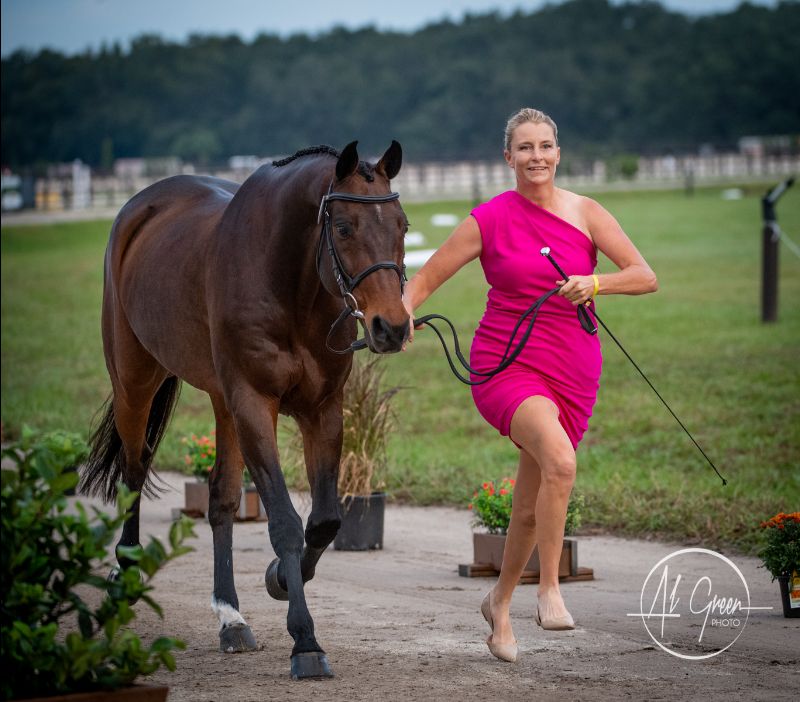 Best Turned-Out At the Horse Inspection
With her hot pink one-shoulder cocktail dress, Kozumplik-Murphy presented a bold pop of color at the morning jog. It made a striking appearance with her grey four-star horse Rubens D’ysieux and she was awarded the Best Dressed Award at the FEI Horse Inspection. She received a string of pearls, sponsored by Ashmore Equestrian.

Groom’s Award
Selected by the ground jury, Katie Strickland, a groom for Cornelia Dorr, won $500 for the Groom’s Award. 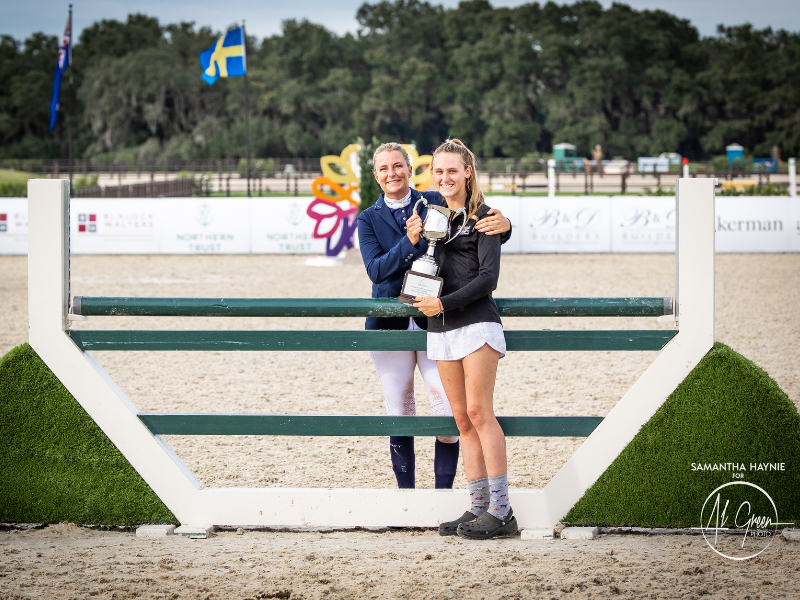