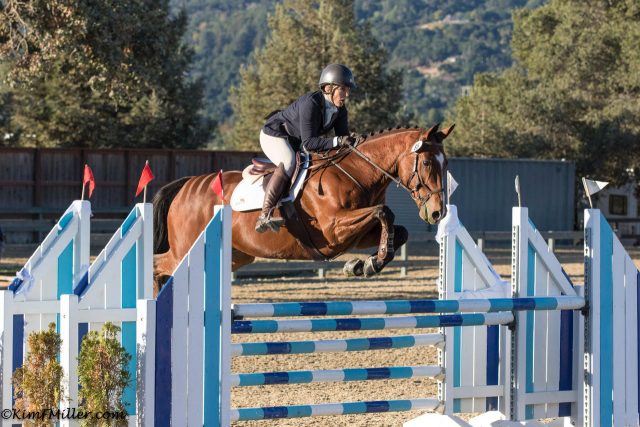 Professional Stephanie Goodman regularly treks from Idaho to Woodside and other California venues, but today’s Open Intermediate victory with her own Carolina Morning made the long haul especially worthwhile. She and the 8-year-old Thoroughbred finished on their 33.60 dressage score from judge Gretchen Butts.

The Boise, Idaho-based trainer wasn’t sure of the horse’s jumping potential when he came from the track as a 4-year-old. As a 5-year-old, he eschewed anything resembling a ditch or bank and, as the trainer’s personal horse, “he spends a lot of time not being ridden.” Nonetheless, he keeps rising to each upward challenge, including this weekend in his third Intermediate outing.

Dressage has been a particular challenge. “He’s a very confident horse and he doesn’t like being told what to do,” Stephanie said. “And there’s really a lot in the Intermediate B test.”

Yet, he’s also obedient and has a huge heart that’s helped him tackle each new challenge and Stephanie’s patient, one-step-at-a-time has served the pair well. “I just hope he keeps getting stronger and better,” she noted.

The overnight standings after Saturday’s cross-country held in this division. Marissa Nielsen and Vinetta M incurred only 2.40 time penalties over Marc Donovan’s stadium jumping track to stay in second. She and the 10-year-old Hanoverian were clear over Bert Wood’s cross-country on Saturday. Right behind them in third were Kelly Pugh and Ringwood Trendsetter, an 8-year-old Irish Sporthorse. 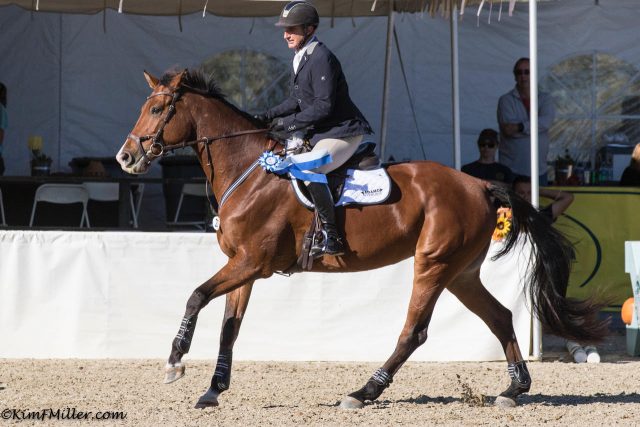 With over 40 Preliminary entries, the division was split in two, with familiar faces –horses and riders – emerging the winners. Bay Area professional David Adamo had three horses entered and rode each to top five finishes. The best among those was A group winner Solaguayre California, the 8-year-old Argentinian sporthorse with whom Adamo won the inaugural Modified Training Horse Challenge at the same venue, The Horse Park at Woodside, in August.

“When I heard about that new division, I thought it would be great preparation for Preliminary,” Adamo explained.

Apparently Solaguayre California agreed, finishing on her 24.60 dressage score earned Friday from judge Vicki Matisi. They cruised on to make the time over Bert Wood’s cross-country route without pushing the pace. This being the young mare’s first try at the level, Adamo was pleasantly surprised to breeze across the finish line under the time. Show jumping has been the horse’s strength from the get-go, so Adamo was happy but not surprised to get the clear needed to maintain the top spot.

Adamo was fifth in the A group with another Modified Training Challenge star, Dos Lunas Filipo, the Argentinian gelding with whom he finished third in the August competition. The Modified Training Challenge was developed by veteran event organizer Robert Kellerhouse to be a suitable stepping stone for the big move from Training to Preliminary. Adamo’s results with both horses validate its value in a young horse’s development.

Argentina has become a favorite sporthorse source for Adamo. Solaguayre California and Dos Lunas Filipo epitomize the country’s bold and talented bloodlines, and the trainer loves the range of experiences to which these horses have typically been exposed when they come up for sale.

In the Preliminary B group, Adamo finished third aboard Fred. The 10-year-old is a Holsteiner, not Argentine-bred, but the trainer loves his potential, too. Fred was purchased for an amateur client a few years back and Adamo is enjoying bringing out his potential.

Rounding out the A group top three, Josh Barnacle and Happiness Is were second as the 11-year-old Hosteiner finished fault free on their 27.20 dressage score. Shannon Lilley and Carrigdhoun Cool Lad held their overnight third spot to finish on a 31.10 for the 7-year-old Irish Sporthorse. 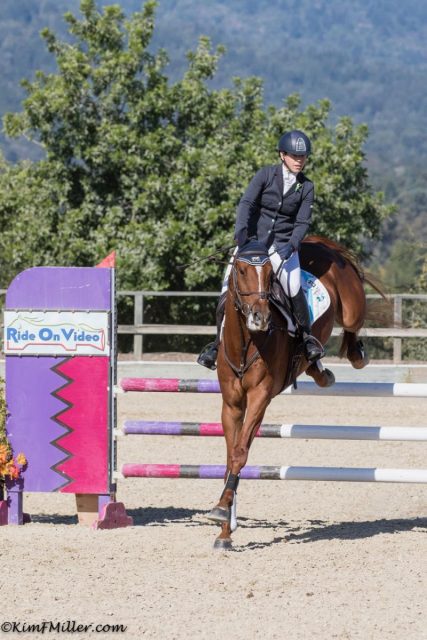 Shannon Lilley has only had Ideal HX for one month, but her high hopes for the 6-year-old Dutch Warmblood are already being realized with their victory in the Preliminary B group. Shannon owns the horse with her father, Alex Lilley. The last horse they partnered in was Ballingowan Pizzaz, Shannon’s partner in a 2011 Pan Am gold medal. Like Pizzaz, Ideal also got the nod from coach Dayna Lynd-Pugh. “So, we hope this guy might be just as good!” Lilley said of the horse sourced through Caroline Martin Eventing.

“He’s still learning connection for dressage,” she said, which was not evident in the 25.20 score from judge Vicki Matisi on Friday. That and a clear cross-country effort had them in third coming into Sunday stadium, when a double clear trip elevated them two first after the two pairs above had a rail.

“He has a big rangy canter and he’s game on cross-country,” explained Shannon, who is also president of the Eventing Riders Association of North America. And, he’s fun to campaign and to be in the barn with. “He has the most personality of any horse I’ve ever owned. He is totally in your pocket all the time and very sweet.”

The overnight leaders were junior rider Jordan Crabo and the 17-year-old German Riding Pony, Black Gold. The bold pair had a show jumping rail to bring their dressage score to a 28.60 for second. Adamo and Fred’s rail took them from second to third.

The top seven finishers in each division took home armloads of useful prizes from generous Woodside International Horse Trials supporters. These included grooming gear and equipment from Professional’s Choice, gift certifiates from Ride On Video and Marcus Greene Photography and a stall plague from The Horse Park at Woodside.

Speaking on behalf of the 400-plus exhibitors, organizer Robert Kellerhouse expressed appreciation for sponsors Devoucoux, Parker Equine Insurance and Auburn Labs, longtime supporters of the event.

Many exhibitors will reconvene at Kellerhouse’s final major competition of the year, the Galway Downs International Horse Trials in Southern California’s Temecula. This important qualifier set for Oct. 31-Nov. 3 features divisions up to the CCI4*-L and includes the Training Three Day division. 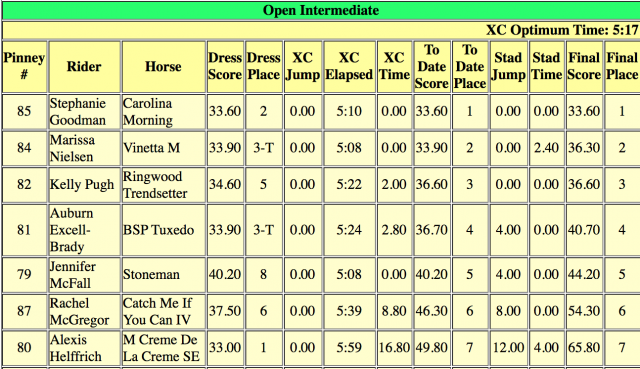 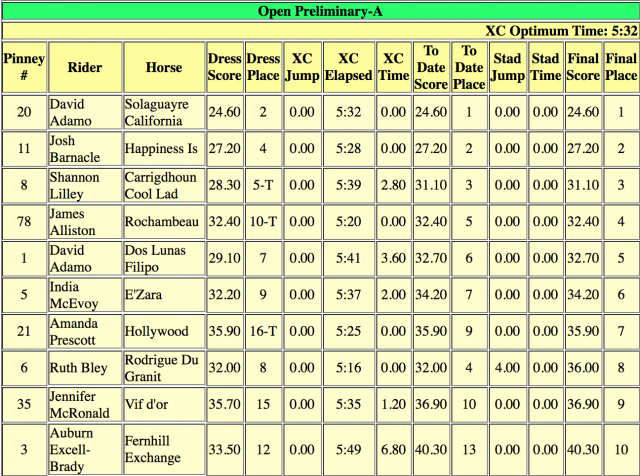 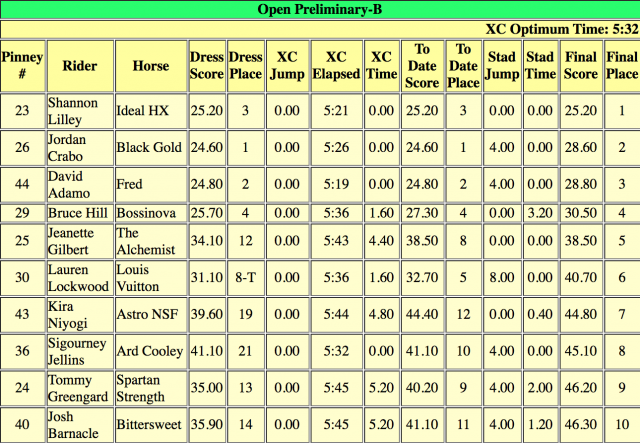