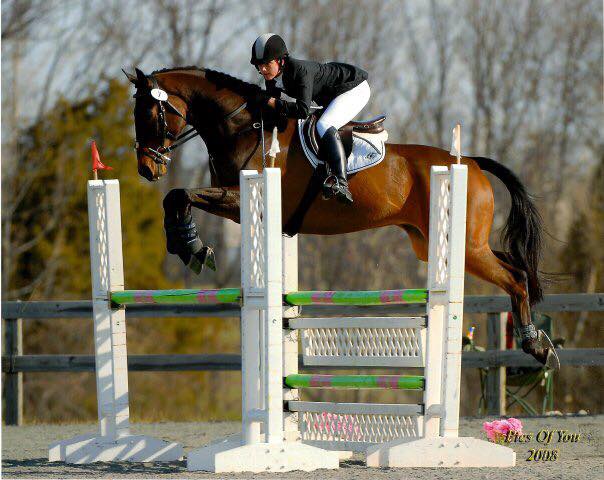 Elinor MacPhail and Woodstock II. Photo courtesy of Pics of You.

We’ve just received the sad news that Woodstock II was euthanized in Ohio today following a pasture accident. He finished in 5th place with the late Amy Tryon at Rolex in 2006 and went on to take team silver with Elinor MacPhail at Young Riders in 2008. He was 20 at the time of his death.

Ellie was home from her base in Ocala, Florida, for Thanksgiving at the time of the accident and was able to be with “Woody” in his final moments. She shared the following tribute message on her Facebook page:

“RIP Woodstock. Horse of a lifetime. He was stubborn, lazy, made you work for every inch (he didn’t come with the nickname Pecker for no reason), but he knew his job and loved doing it. Thinking of Amy today and how much they both taught me and glad I got to be home with him in his last few days.”

An off-track Thoroughbred developed by Amy beginning in 1997, the pair garnered Advanced wins at Rebecca Farm and Twin Rivers in addition to their top-five placing at Rolex.

Ellie then bought the horse to be her Young Rider mount, and in addition to a silver medal, Woody also carried her to the top Young Rider placing at Fair Hill International CCI2* in 2008.

She also rode Woody in the USEF’s Developing Rider program during the winter of 2009 before deciding it was time to look ahead to his retirement. Ellie and Woody won the Preliminary Championship at the American Eventing Championships in 2009 before she leased him to Anna Robinson, who successfully campaigned him at the lower levels in his golden years.

Thank you to Sally Crane Cox for sending in the beautiful obituary and tribute to her “wonderful old friend” Woody. The EN team sends our condolences to all who know and loved the horse. Rest in peace, Woody.