In August 2017 writer/rider Leslie Wylie is attempting her most fearsome feat of #YOLO yet: a 620-mile race across Mongolia. Riding 27 semi-wild native horses. Carrying only 11 pounds of gear. Relying on nomads for food, water and shelter. On a mission to help stop deforestation.

Held Aug. 9-19, the Mongol Derby is widely regarded as the toughest horse race in the world. Inspired by the Genghis Khan’s original “pony express,” there’s no trail or set route, just 25 GPS checkpoints/horse exchange stations to hit over the course of 7-10 days. Keep it here for updates on Leslie’s ride of a lifetime! Click here to read previous stories in the series. 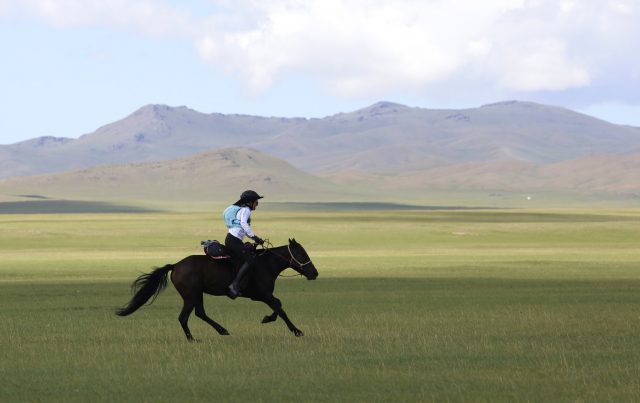 The entire team at Nation Media (Eventing Nation, Horse Nation and Jumper Nation) agreed early this morning that we all slept terribly last night. Kristen had nightmares about the Mongolian steppe, while Lorraine was tossing and turning in half-state of wakefulness, imagining she was trying to remember how exactly a compass works. Our ferocious, never-pick-a-fight-with-that-one editor at EN Jenni Autry admits that even she got a little misty-eyed this morning, as we all did when we saw this: All of us woke up to see our own Leslie Wylie well out in front on day 1 at the Mongol Derby!

The ponies set off at at 10 a.m. Mongolian time (10 p.m. EST last night) from that little green flag, and 12 hours later, that little red dot at the front of the pack is our very own Leslie Wylie.

She was the only rider to make it to the third checkpoint in time to get vetted, supply up, and move on before the official end of day one, when all riders must dismount and camp for the night. This means that Leslie will have a good head start on the competition going into day two, and also means that she’ll be sleeping on the steppe with only her hobbled pony for company. 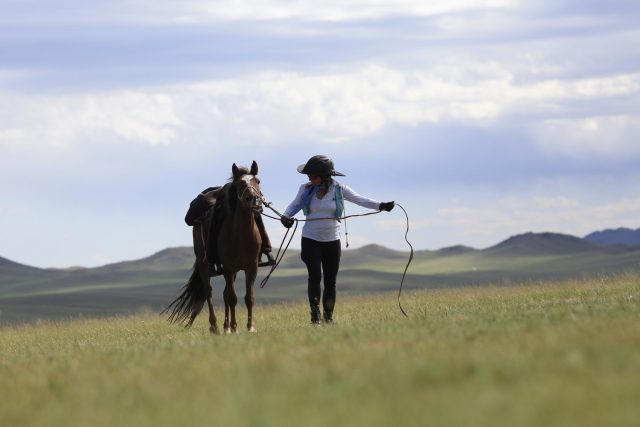 Kristen and I mused over whether or not sleeping in the wide open landscape of an ancient rural nation was lonely or incredible, and ultimately opted for incredible. No light pollution, no snoring competitors, and a whole new skyscape to stare at before drifting off to sleep for the next incredible day’s journey. (Not to mention the morale boost of being in the lead!) 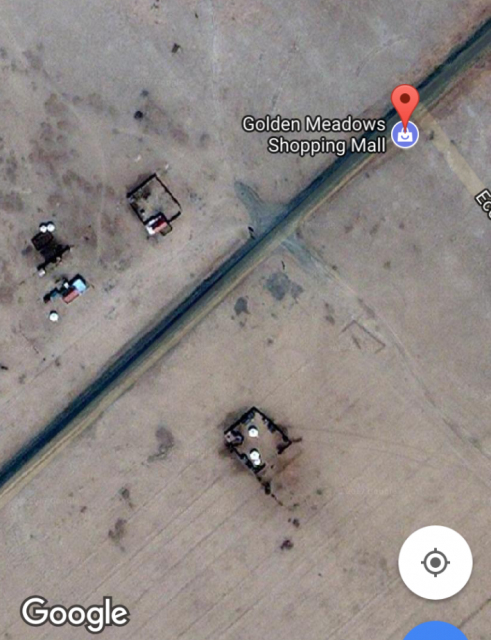 Then we zoomed in on her camping spot for the night only to discover that she made it to at least some form of civilization, at least by Mongolian standards. We doubt the Golden Meadows Shopping Mall has a P.F. Chang’s, but it’s far better than sleeping exposed to the elements out on the steppe!

Timeline of Day One

All of the riders completed two days of training with much success, and reports on the ground say it’s a reserved and focused group of riders. Leslie is probably saving her wine for later, as we can assume from this report.

(That’s our own LW in the black SmartPak coat!)

The competitors wrapped up race preparations in prayer with the local lamas, who prayed for a safe journey for all horses and humans.

Riders praying w the lamas before the start for a safe journey for both horse and human pic.twitter.com/i0QgtaLqxV

It was a gorgeous day on the steppe to start the race, with heavy rain moving through briefly in the early afternoon, but appearing to let up in the overnight hours. On the outset, it looks like the horses were ready to run, and we can’t wait to see what other ponies will make appearances in the weeks to come. According to one of the on-site vets, they’re a “strapping set” to get going!

The pack streams off the start line into an ocean of steppe at 11.11 this morning. What you been up to since then? They just been riding pic.twitter.com/Ta9rubbhq7

So far, no major problems to report on course for any of the riders. There has been one reported injury so far. Pierre Germaine from Owings Mills, Maryland had to get stitches on his face, but got right back in the saddle and pushed on.

Early on, riders had the choice of following the course over a fairly intense ridge, or going a longer flatter route, and it appears the riders who stayed the course but took on the elevation change (including Leslie) made out better, arriving at the first checkpoint ahead of the long flat routers.

All of the riders have made it to at least the first checkpoint, with 13 riders bunked in at Urtuu #2,  eight riders stopped at Urtuu #3, (nine if you count the one who appears slightly lost to the south) and another dozen or so camped somewhere out on the steppe.

There were a handful of penalties assigned at the end of day one, as well: Eleven veterinary penalties were issued to riders for “speedy riding and rather daring navigation.” They will get two hours of penalty time each, where they’ll be required to wait two extra hours at checkpoint #11 whenever they arrive there. Two riders received a late penalty for continuing on 30 minutes after the cut-off time at 8:30. They had initially planned to camp, then changed their minds and gone on to station 3. They will be penalized three hours each.

According to the organizers, it’s not unusual for riders to get penalties in the first couple of days as they learn to navigate the terrain, judge their horses better, and estimate time and distance. Then usually the penalties drop off quite a bit.

With the 12-hour time difference from Mongolia to the East Coast, we get underway again later tonight at around 10 p.m. EST.

As you’re following along, here’s some things we’re learning about how the live GPS tracking works:

Leslie’s progress as of 6:15 EST this morning (the red dot). Despite fan theories that she had taught her pony to fly, it’s more likely that her GPS tracker went offline slightly before pinging again, giving her the appearance of some incredibly straight direction of travel.