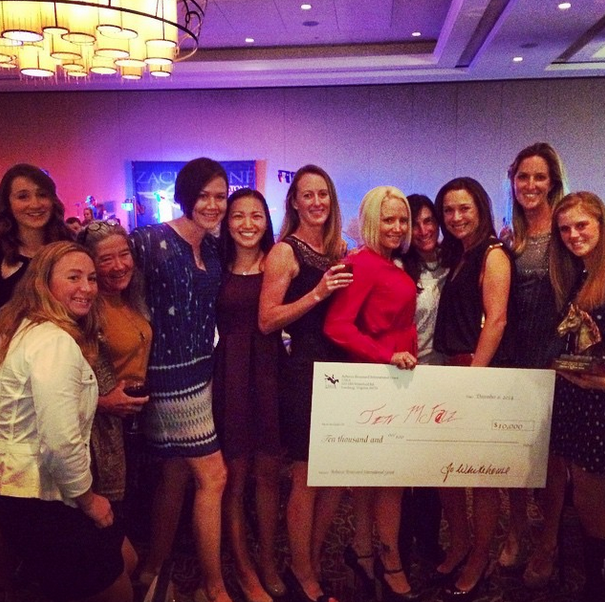 A big night for the West Coast! Photo via EN’s Instagram.

Grant and award recipients were honored at the USEA Annual Meeting & Convention’s Saturday night banquet this past weekend in Fort Worth, Texas, with Jimmy Wofford serving as Master of Ceremonies per tradition. Click here to view a full list of winners, and read on for a summary of the biggest awards of the night.

Caroline Martin was named the Point Two Young Rider of the Year, while Bonner Carpenter took the Stackhouse Saddles Adult Amateur of the Year title. Lauren Kieffer had a big night, winning the Devoucoux Lady Rider of the Year Award and also celebrating with Veronica being named CWD Mare of the Year. And the crowd adored Bento Box, the Pony of the Year.

No Boundaries, owned by Jill and Henry Tallman and Erin Sylvester, finished sixth at Les Etoiles de Pau CCI4* in France, cementing his title as USEA Horse of the Year. Erin and “Bucky” have worked hard in 2014 to improve their international performances, and they’ve certainly reaped the fruits of their labor with this well-deserved award.

Buck Davidson took top honors as World Equestrian Brands Rider of the Year, and he also accepted the USEA Historical High Point Horse Award with longtime owners Carl and Cassie Segal on behalf of Ballynoe Castle RM. “Reggie” just edged Winsome Adante’s 1,355 lifetime points with his total of 1,377. We know Reggie and Buck aren’t ready to hang up their spurs just yet, so what will come next from this talented pair? Their story is far from over. 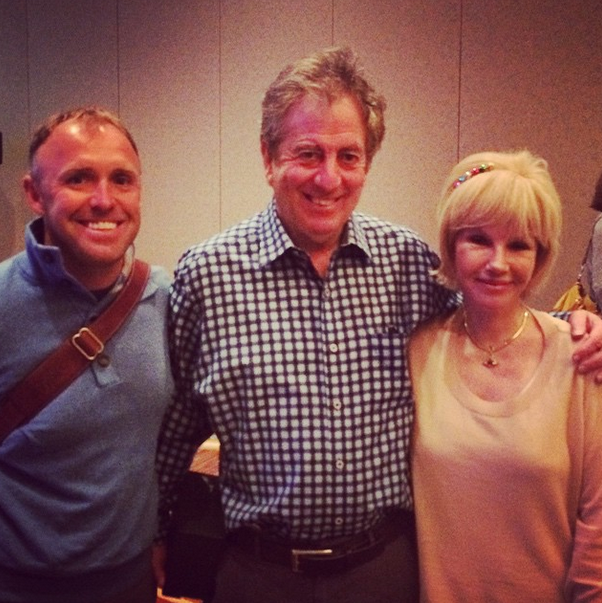 A big weekend for Buck Davidson and Carl and Cassie Segal. Photo via EN’s Instagram.

Surely one of the loudest cheers of the night went up for local rider Janet Taylor of Fort Worth, who won the Vintage Cup, an award given to an eventer who continues to compete at 60 years of age or older. She has ridden in a Novice or Training Three-Day each year the past five years and remains a dedicated supporter of the long format in the U.S.

Another of our favorite awards is the Andrew H. Popiel Memorial Trophy, which is given to honor event organizers and their commitment to the sport. Kay and Bob Willmarth, two very deserving recipients, received the award this year in honor of their work with Richland Horse Trials in Michigan, which remains a top CIC3* on the U.S. calendar.

The Cornerstone Instructors Award honors longterm dedication to instruction at the lower levels and was given to two very special recipients this year. Beloved Area VIII trainer Nadeem Noon, who is battling a life-threatening condition called Amyloidosis, accepted his award in a very emotionally charged moment. Alice Sarno, who is adored by her students, also received the award in honor of her tireless dedication to teaching in Phoenix, Arizona.

In another tearjerker moment, Desiree Bruce received the Ironmaster Award for her contribution to the sport in the face of unbelievable obstacles. A two-time breast cancer survivor, she is working to raise awareness and funds through her campaign “Jump for the Cure” at Aspen Farm Horse Trials and throughout the Pacific Northwest. 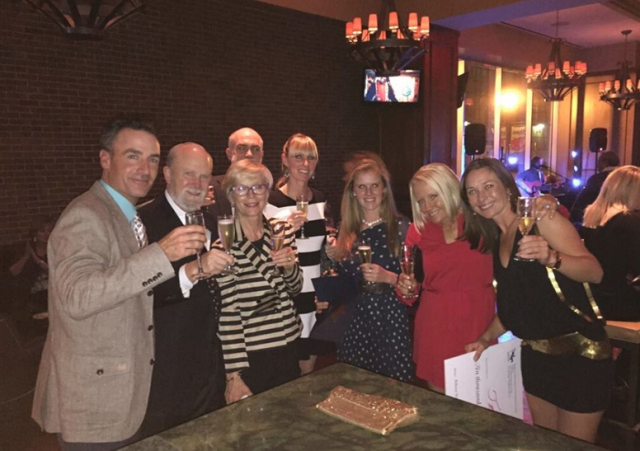 The 2014 Governors Cups were awarded to a group of people who have dedicated countless hours to the USEA and sport as a whole. Trish Gilbert is well known for her tireless work with the Dutta Corp Fair Hill Hill International. Jon Holling is wrapping up his service to the USEA Board of Governors this year, but his work with the organization is far from over.

John Michael Durr accepted the Governors Cup on behalf of his mother, Candace Rice Durr, who lost her battle with cancer this fall and will be remembered as the quintessential horse show mom who took so many West Coast riders under her wing. Past USEA president Brian Sabo also received the Governors Cup, as did super volunteer and much-loved Kentucky trainer Cathy Wieschhoff.

The Wofford Cup, which is given by past recipients of the award to a deserving nominee who shows unbridled dedication to the sport, was awarded to Bobby Costello, chair of the USEF Eventing Selection Committee, and lynch pin of the U.S. High Performance program.

It proved to be a big night for the West Coast, with Hawley Bennett’s groom Sarah Braun receiving the USEA Groom of the Year Award in a moment that took her totally by surprise. Eventing 25 rider Alex Ahearn, who competed in the CCI2* at Fair Hill this year, received the $5,000 Beacon Charm Grant, named after Bruce Davidson’s famous mount. 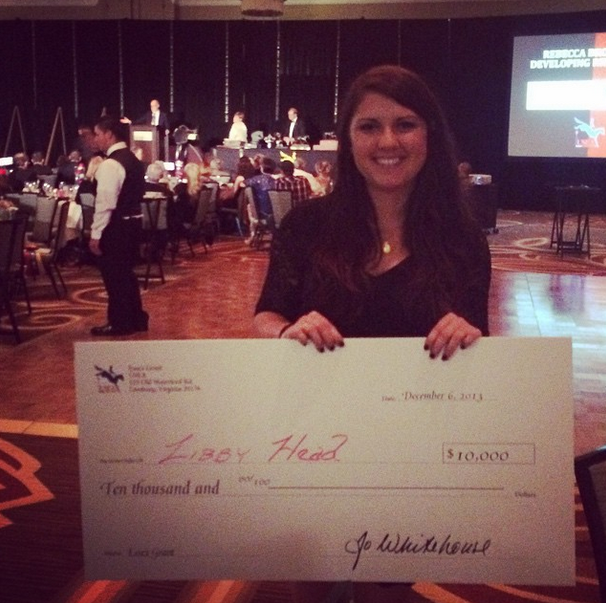 Libby Head, who had a real breakthrough year aboard Sir Rockstar to finish her first CCI4* at Rolex Kentucky with no jumping penalties, won the $10,000 Essex Grant, which was created in 2012 to help a Young Rider successfully transition to the senior ranks.

Another big moment of the night came when Phillip Dutton announced the creation of the $25,000 R. Bruce Duchossois Grant, which will be given in partnership with his owner Caroline Moran in Bruce’s memory. The grant will award $25,000 to a one- or two-star horse that shows potential to represent the U.S. on an international level.

“Our hope is to incentivize owners and riders to keep talented horses of this caliber here in the U.S. so they can one day go on to compete for our country. And if the winner of this grant ever does go on to accomplish that, we’ll award a bonus to acknowledge such an incredible achievement,” Phillip wrote on his blog.

Bobby Costello, Joanie Morris, Bea di Grazia and Kevin Keane will act as talent spotters for the grant, along with Phillip and Evie Dutton, and the first grant will be awarded at next year’s USEA Convention in Washington, D.C. 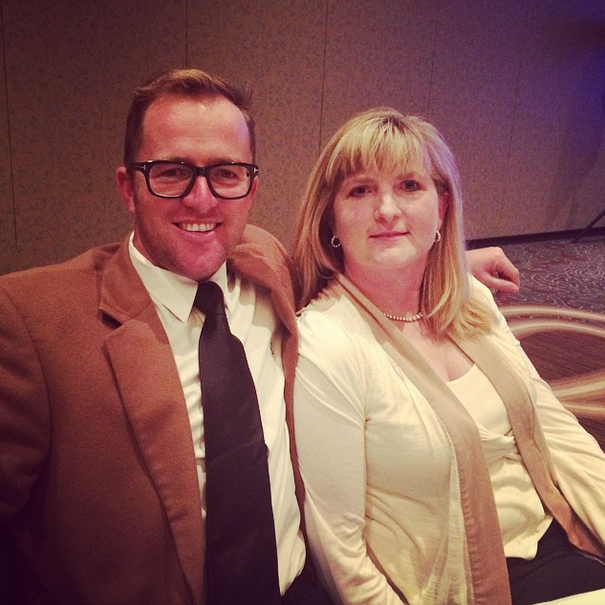 Will Faudree and Jennifer Mosing celebrate. Photo via EN’s Instagram.

We also wanted to give a special shout out to the Professional Riders Organization award winners, who were honored at a reception Friday night. Jennifer Mosing, a longtime owner for Will Faudree, received the As You Like It Owners Award, which is given to an owner who has had a large influence on a rider’s career and made an exceptional contribution to the sport.

PRO also announced the Triple Crown Junior/Young Rider Scholarships for both East and West coast recipients. Jamie Miess and Margo Goldfarb are the big winners on the East Coast, with Madison Langerak and Sydney Rice representing the West Coast.

This scholarship program is geared toward developing young riders in the U.S., and they will all receive one week of training with an upper-level rider; this year’s hosts are Jan Bynyy, Lynn Symansky, Matt Brown and Tamie Smith. They also receive a $7,500 tack package from our awesome sponsor World Equestrian Brands; talk about a great prize, right? 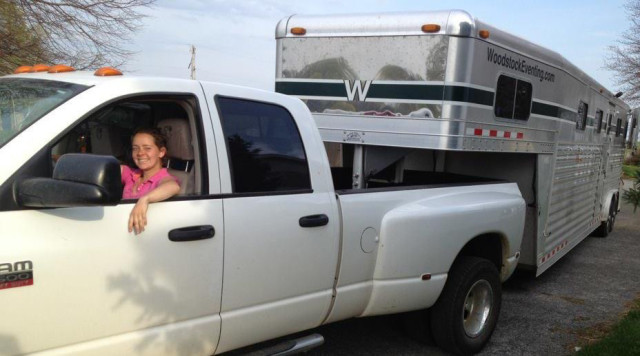 Stacey Driscoll, head groom for Ryan Wood, received the $5,000 Liz Cochran Memorial Groom’s Award. This award was started in 2011 and honors a groom, who is nominated by riders and peers, who has made a notable impact on a rider’s career and the wellbeing of the horses in his or her charge.

“The Liz Cochran Groom Award is my favorite award, as it acknowledges the ones behind the scenes making all that we do possible,” Ryan said. “Without Stacey, I wouldn’t be where I am today, and for her to receive this award makes me so proud. Thank you, PRO, for giving this special award.”