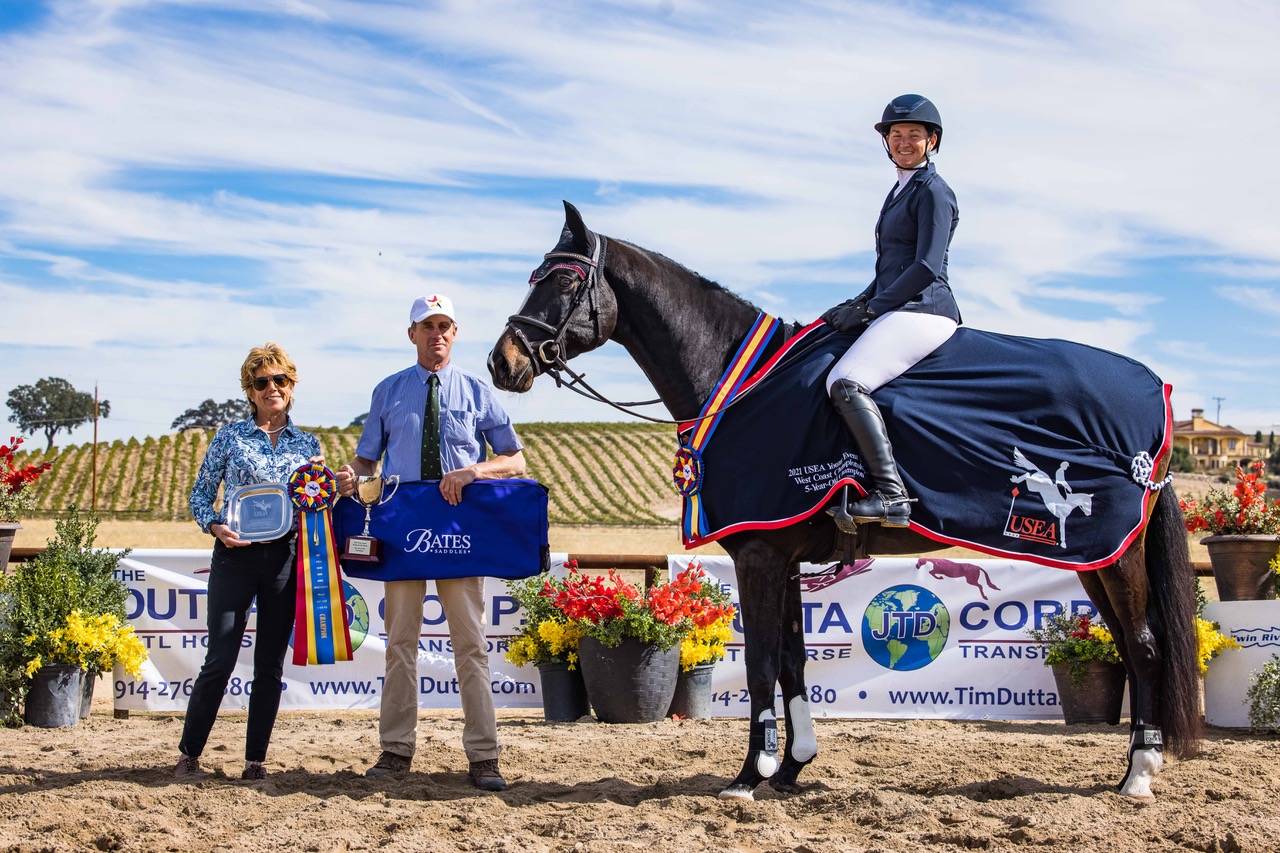 The 2021 Dutta Corp. USEA Young Event Horse (YEH) and USEA Future Event Horse (FEH) West Coast Championships held on Oct. 29 and 30 at Twin Rivers Ranch in Paso Robles, Calif., gave young horses the chance to shine on a big stage. The 4-year-olds and 5‑year-olds that culminated a year of YEH events and the yearlings, 2-year-olds, 3-year-olds, and 4-year-olds that finished the FEH calendar for 2021 left the judges, their riders, and those in attendance excited about what lies ahead for the future of the sport of eventing.

“My goal all year with him was to do the 5-year-old Young Event Horse [West Coast] Championships,” Birtcil said. “I knew he had a great amount of talent and it would be a great showcase for him to show that off in.”

YEH judges Chris Ryan from Ireland and Debbie Adams from the United States scored the West Coast Championship horses in three sections: conformation/type, dressage, and jumping test/gallop/general impression. Lex D scored highest of the 13 5-year-olds in conformation/type with a 9.7 out of 10 and combined that with the second-best dressage score of 16.6 out of 20 and fourth-best jumping score of 66.6 out of 70 for a total of 92.9.

“He’s a super mover and very much a head-turner just to look at,” Birtcil said. “On top of that, he’s super brave and has a great jump. He was at a show jump barn in Holland where I get most of my horses from, but the big thing that Maarten and I both look for is that they just have to be brave and willing.”

The West Coast reserve champion for the 5-year-olds, the brown Dutch Warmblood/Holsteiner mare Liefhebber ridden by Andrea Baxter, turned in the best dressage score of 16.8 and second-best jumping test score of 66.9.

“She is a fabulous mover and a fabulous jumper,” Baxter said. “I’m still getting to know her, and she’s green. But, in a weird way, my mistakes almost showed off her talent better. She was fabulous in the whole thing.”

Montecristo, a bay Thoroughbred gelding with a previous racing career under the name of Swope, had the top jumping test score of 67.5 ridden by Joe McKinley. Montecristo won The Jockey Club’s Thoroughbred Incentive Program (T.I.P.) award for the YEH 5-Year-Old West Coast Championship.

“His brain is just so easygoing,” Smith-Cook said. “He’s pretty go-with-the-flow, and then he has the gaits. He moves super well. He jumps fantastic. He just wants to do his job.”

They combined the third-best dressage score of 15.8 with the second-best conformation score of 8.7 and second-best jumping test score of 59.7 for a winning total of 84.2.

“It’s kind of hard to pick one thing or one phase,” Smith-Cook said. “I would say he’s super good at the flat work, but his gallop is unreal.”

McKinley’s bay Thoroughbred gelding Starting Over, a former racehorse under the name of Albert Park, captured the Stillwater Farm Award for the best gallop score for the 4‑year-olds and The Jockey Club’s T.I.P. Award for the 4-year-old class.

For the USEA FEH West Coast Championships, Graceland’s Ladera, a bay Oldenburg mare owned and handled by Charlotte Freeman, was West Coast champion 4-year-old after Friday’s evaluations of horses’ gaits under saddle and conformation and Saturday’s free jump by judges Susan Graham‑White from the United States and Chris Ryan from Ireland.

Graceland’s Ladera also qualified for The Dutta Corp. USEA YEH West Coast Championship through Twin Rivers’ Last Chance Qualifier held on Oct. 28, but Freeman opted to focus on the FEH series as a better fit for where the mare was in her training.

Trilogy, a grey Belgian Warmblood/Thoroughbred filly bred and owned by Janine Jaro and handled by Homan‑Taylor, was 2-year-old West Coast champion based on Friday’s conformation evaluation after also winning as a yearling in 2020.

With 2020 being the first year that the YEH and FEH West Coast Championships were run as a standalone event at Twin Rivers, 2021 saw the event grow in popularity.

“We’re year two into it, and it was impressive how many more people traveled from a far distance to come here,” organizer Connie Baxter said.

The weekend gave young horses their own special-event experience. In addition to several hundred in attendance, the livestream produced by Ride On Video attracted approximately 1,000 viewers.

“For as quiet as a show that it is with it being a standalone event, it still has a ton of atmosphere which is great exposure for the young horses,” Birtcil said. “If they are going to move forward in this sport, I think it’s a great opportunity for them. It’s fun to do with the young horses and really builds their confidence.”

It also gave the riders a chance to appreciate their rising stars.

“You ride your upper-level horses, and you know them really well, and then the young horses, it’s like, ‘I wonder what they’re going to do,’” Braitling said about the camaraderie among riders. “Coming out, you feel like you’re ready to go to the Olympics.”