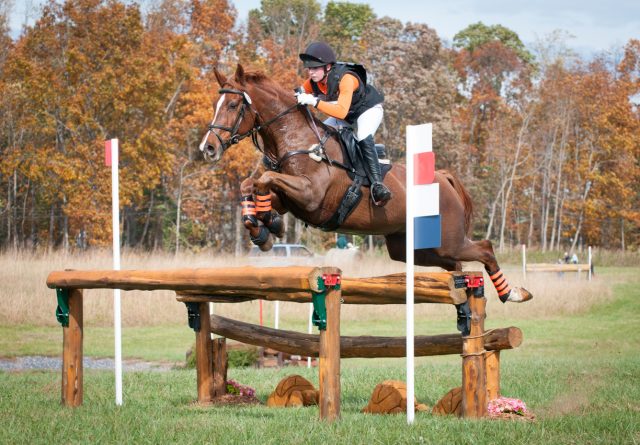 Alexandra Baugh and Ballingowan Pizazz, winners of the CIC2*. Photo by Leslie Threlkeld.

Area VIII Young Rider Alexandra Baugh, 16, has won the Virginia CIC2* in her first attempt at the level with Altorac Farm’s 15-year-old Irish Sport Horse, Ballingowan Pizazz. They finished on their dressage score of 47.7 to top the division of 29 starters.

“Mango” is an experienced horse, having represented the USA at the 2011 Pan American Games with rider Shannon Lilley. He then partnered with Michael Pollard and competed extensively at the three-star level.

Baugh has had Mango now for two years. They have twice competed for Area VIII at the FEI North American Junior and Young Riders Championships, earning an individual silver medal this year. They moved up to the Intermediate level last spring but VHT is their first CIC2* as a pair and first international win.

A dressage score of 47.7 put Baugh and Mango in fourth place to start the competition. “Our warm-up was very good, we just tried to keep him relaxed and forward through my aids,” Baugh said. “Mango clearly knows his job and doesn’t need much warm-up. Once in the test he was perfect. I was very pleased with our score and how the test rode.”

For show jumping, Baugh said Mango “felt like someone had strapped a rocket to him.” A confident, double-clear round moved them up one place to third overnight.

Only eight CIC2* horse and rider combinations finished without time penalties on Captain Mark Phillips’ and Andy Bowles’ undulating cross-country course. Baugh and Mango were among them; the crossed the finish line exactly on the optimum time. A single second over and they would have dropped out of the lead.

“This is our first CIC2* together, so I set out just wanting to get around with a clear round. Around half-way through the course I realized that we were in contention with the time and Mango still had plenty of run in him, so I decided to go for it. He jumped great all the way to the end with lots of run still in him,” Baugh said.

“I would like to thank my coaches Reese Koffler-Stanfield and Richard Picken. Reese has been an unbelievable coach and has really helped me improve my dressage. Richard was a huge help all weekend and has been such an amazing mentor and coach. I have learned so much from both of them in such a short period of time and I am very lucky to be able to call them my coaches!”

Finishing in second place in the CIC2* was Kaitlin Spurlock and Steplin, LLC’s 10-year-old Holsteiner, Cartender de Nyze. They were second after dressage but dropped to fourth after picking up three time penalties in show jumping. A fault-free cross-country round today moved them back up to their initial placing and a finishing score of 47.8, only 0.1 penalties behind Baugh.

Cindy Anderson Blank and Phyllis Dawson’s homebred Irish Sport Horse, Windchase Phoenix Star, likewise stalked the leaderboard throughout, placing third after dressage with a 46.1. They were double-clear in show jumping and added only 2.0 time penalties on cross-country to finish in the same position on a 48.1. 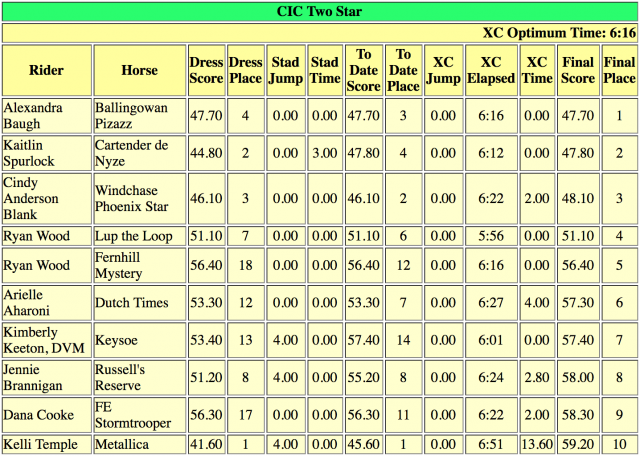 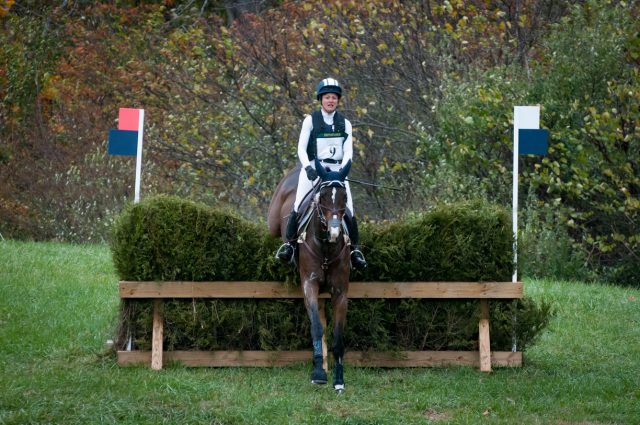 Looking to the CCI2*, Lynn Symansky and the Donner Syndicate’s RF Cool Play are the new overnight leaders. They moved up from second place after Jessica Phoenix and Bentley’s Best picked up 20 penalties on cross country. Symansky and the 9-year-old German Sport Horse sit on a two-day score of 42.2 and will have one rail in hand heading into the final phase.

Tim Bourke and Tracy Zack’s 10-year-old Irish Sport Horse, Astrana De La Galerna, are second in the mare’s first CCI2* on a 47.0. They are followed closely by Hannah Whalen and her own and Lauren Pollin’s Didgeridoo, a 10-year-old Selle Français bred by four-star eventer Boyd Martin. Both combinations moved up two places after posting double-clear cross country rounds. 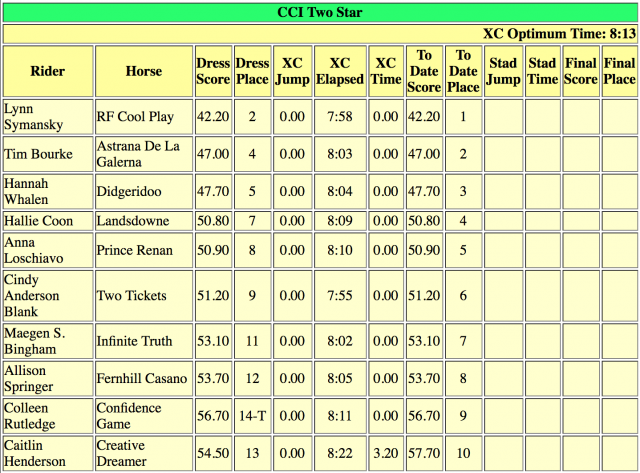 In the CCI1*-A division, Ryan Keefe and Rumsey Keefe’s 17-year-old Thoroughbred, Flintstar, went clear across the country to hold their lead on a 48.1, but with little room to spare ahead of the tightly scored field. In show jumping this morning they used up every last inch of budge room but remained in the lead to win the division. 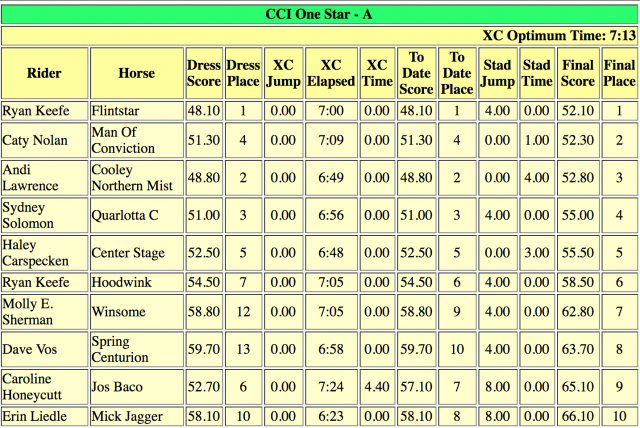 Molly Kinnamon and her own 8-year-old Thoroughbred, Concord Dawn, remain in the lead in the equally competitive CCI1*-B division. 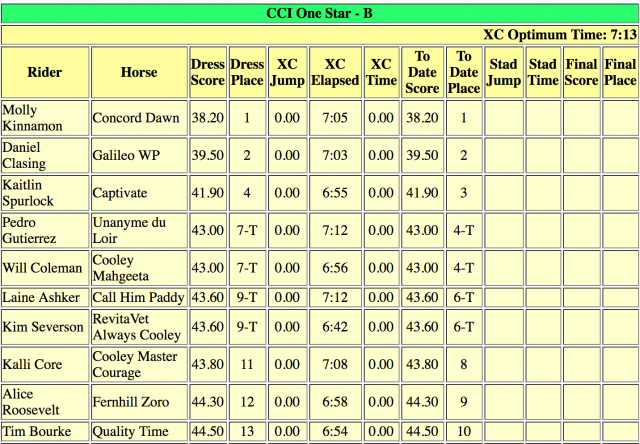