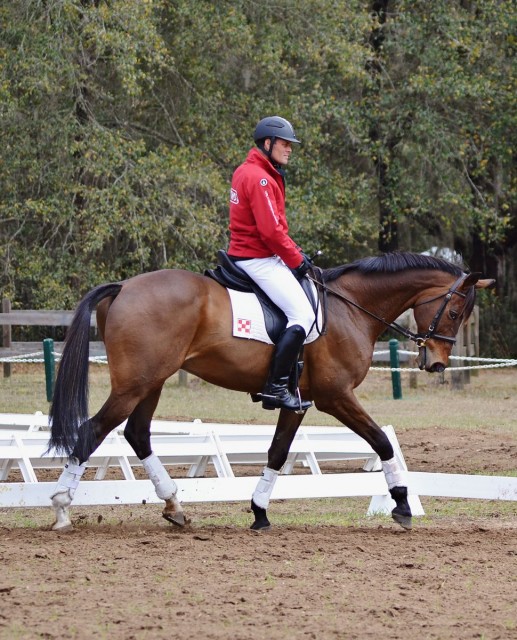 Hello from Red Hills! I have to start by saying we’re sending our very best wishes to Silva Martin, who has been hospitalized following a freak accident in Wellington this morning. We have the full details on that in this post, so click over and leave a get-well message for Silva. Elinor Klapp Phipps Park is buzzing this afternoon as competitors settle in for the event, which starts bright and early tomorrow morning. I spent the afternoon wandering and chatting, especially with the riders who have been based in Florida for the winter, as I haven’t seen them yet this season.

Kyle Carter and Madison Park looked very good this afternoon, as Parker continues to make his comeback following the hock injury that nearly ended his career at Blenheim in 2011. Jen Carter, who very graciously chatted with me while also wrangling her two daughters and dogs, said Parker has been looking very good since coming back from the off season, placing sixth in his Open Intermediate division at Ocala Horse Properties Winter II and third in his Advanced division at Rocking Horse Winter II last month. Kyle and Parker are running the CIC3* this weekend, which will be Parker’s first major test since the Bromont CCI3* last year. 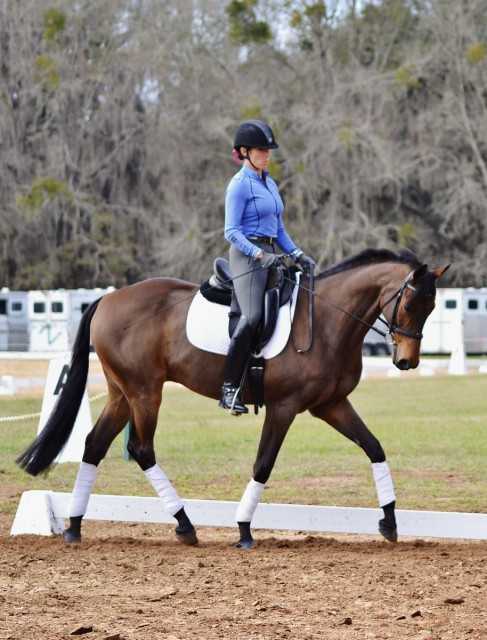 Laine Ashker and Anthony Patch are another pair facing their first major test in awhile, as Al only ran horse trials last year and hasn’t run a three-day since finishing fifth at Fair Hill CCI3* in 2012. Her working student extraordinaire Lauren Sherrill said Al has been looking fabulous this winter, and he eased back into competition at Rocking Horse Winter II last month, finishing seventh in a division of Open Intermediate. Lainey has been lessoning with Gunnar Ostergaard, which has been paying off immensely, and Al looked very soft and relaxed in their ride today in preparation for their CIC3* dressage test tomorrow.

Hannah Sue Burnett is riding F.I.S. Prince Charming in the Advanced division as a favor to Lisa Barry, who is currently on stall rest after tearing the MCL in her right knee and spraining her right ankle after a young horse flipped on her in January. While Lisa is bummed not to be competing this weekend, she said it’s been really valuable to be able to watch Peanut from the ground since Hannah has taken over the ride, and it’s given her a fresh perspective for when she finally is able to get back in the irons. She’ll be cheering them on from the sidelines this weekend. 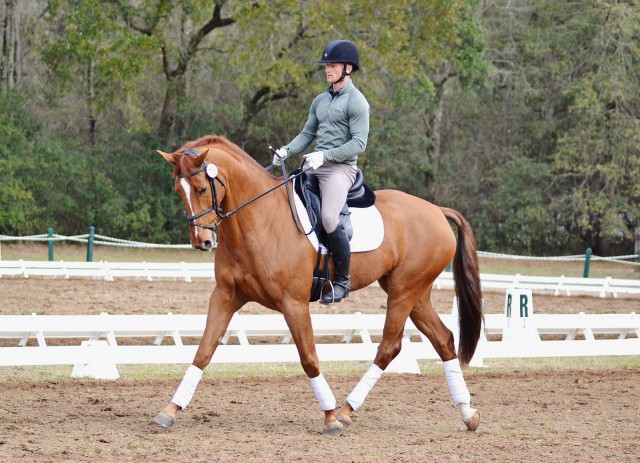 Remember Kyra? Michael Pollard’s stunning Canadian Sport Horse mare has continued to turn heads since she scored a 16.4 on the flat last fall in her Preliminary division at Ocala Horse Properties Fall Horse Trials. She is incredibly correct and fluid in her gaits — especially in the trot — and it’s clear she’s really going to be something. She’s even pretty when she’s being a bit naughty, and she showed a bit of spunk during their ride today. She’ll be doing her first one-star this weekend. Keep your eyes on this redhead! 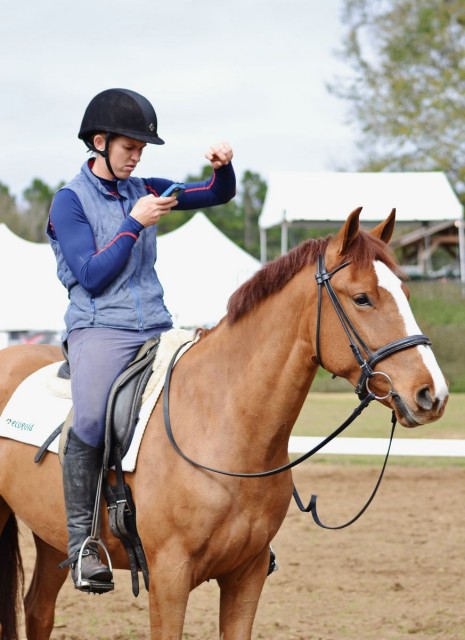 Hugh Lochore’s new cross-country course looks fantastic. I haven’t yet walked the full course, but I’ve scoped out one of the water complexes, which is right next to the dressage arenas, which are, in turn, quite close to stabling. A lot of the riders are curious as to how horses will react to galloping back toward their stalls. There’s also a butterfly skinny that’s quite upright in this water complex, which is toward the end of the three-star course. It’s going to require a careful ride, as horses will be tiring by that point.

The officials and volunteers have been incredibly friendly and welcoming so far, and everyone is buzzing with excitement about having the cross-country course so near the rest of the action. We’ll hopefully dodge a few weather bullets currently in the forecast and have a beautiful four days of competition here at Red Hills. CIC3* dressage starts tomorrow at 8 a.m., with Elisa and Rune kicking off the competition at 7:40 a.m. with the test ride. Stay tuned for much more from Red Hills!