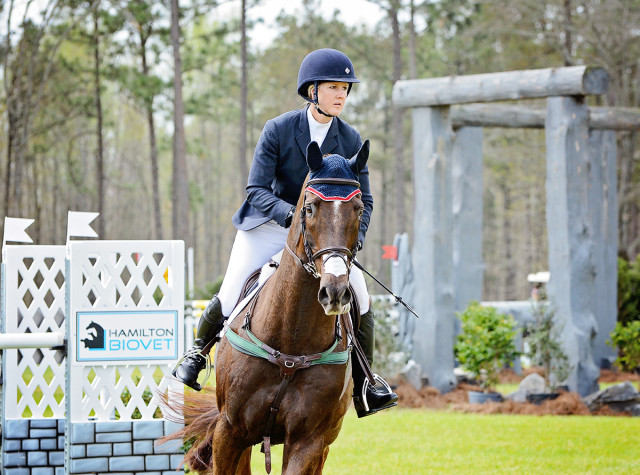 We wrapped up a long but wonderful day here at Carolina International by catching up with some of the division leaders to get their thoughts on all the action. Read on for quotes from Allison Springer, Emily Beshear, Buck Davidson and Liz Halliday-Sharp, and click here to catch up on all of EN’s coverage so far.

Allison Springer and Arthur broke up the three-way tie for first place following dressage in the CIC3* by jumping one of the 16 double clear show jumping rounds today. The 17-year-old Irish Sport Horse gelding owned by the Arthur Syndicate is aiming for his seventh appearance at the Rolex Kentucky Three-Day Event next month. Here’s what Allison had to say about their day:

“I kind of know what I have to do to warm him up and then have to ride him the best that I can to give him a smooth ride. … I thought it was a tough course, but I think our show jumping courses should be tough. … I think it’s good for us. We gotta up our game, and I thought I saw a lot of really nice rounds. I think it was about right.”

On preparing for Rolex: “He knows his job, and I’ve done a heck of a lot less with him. He’s been in work, but after Wellington he had an easy month because I wanted to keep him very happy and strong. I think he’s in as good of form as he’s ever been. I think that comes with wisdom of years of doing it. I don’t have to go to every competiion and do every lesson. You can guage what the horse needs.”

On her longtime partnership with Arthur: “We’re like an old married couple.”

Emily Beshear and Shame on the Moon are sitting in second place in the CIC3* after jumping a clear round with one time penalty in show jumping. The 10-year-old Trakehner/Thoroughbred mare owned by Deep Purple Eventing is gearing up for her first four-star at Rolex next month. Here’s what Emily had to say about today:

“It’s so exciting because I feel like she’s developed a lot. This is two years now that I’ve been riding her. She’s only 10 this year, and I feel like there’s so much more to build on,” Emily said. “She’s the first horse I’ve had that every goal we’ve made she’s met or exceeded. It’s rare because I don’t have many I get to ride at that level, so it’s great to have one like her.”

On the show jumping course: “It was typical Marc Donovan. He tests you in every way possible. He asked a lot of different questions, and it was very fair. If you made a wrong decision somewhere, it could spiral. It really tested me to have good reactions out there.”

On starting to train with Kim Severson for show jumping: “It’s great because in the warm up I’m usually thinking so much about me and what my horse is doing and what I need to adjust, and it was so great to have her on the ground to be able to think of those pieces for me so I could concentrate on my ride and trust that we had the horse warming up as well as I needed to.”

On preparing for Rolex: “My plan is to have this as my last run before Kentucky. It’s nice knowing I have The Fork there if I need it, but I don’t really want to have to use it. I think the course is very impressive, but for a horse that you’re heading to Kentucky, I think it asks a lot of the questions we’re going to need to answer. My plan is to go out and try to give it a nice forward feel. She’s gotten to be such a fabulous cross country horse. All the separate pieces are there. It’s just a matter of me riding one piece at a time.”

Buck Davidson and Ballynoe Castle RM are sitting in familiar territory near the top of a major leaderboard, moving up to third place with a double clear show jumping round. “Reggie,” a 16-year-old Irish Sport Horse gelding owned by Carl and Cassie Segal, is one of six horses Buck has entered at Rolex. Here’s what Buck had to say about today:

“He was fantastic. He jumped great. He really likes jumping on grass. I was going to be darn sure I wasn’t going to have the last fence down … but he jumped like always.”

On whether Reggie will go to Rolex: “I’ll know a lot more after tomorrow. It’s trying to see what’s the best fit for him, and I’ll talk it over with Carl and Cassie, but He feels great.”

On Ian’s new course: “I really like how much galloping there is. … It’s not overly big and overly tricky, but there’s plenty to do out there. It should be an exciting day tomorrow.”

Buck Davidson had his game face on in show jumping today! Fan favorite Ballynoe Castle RM (and EN’s pick to win!) is now sitting in third in the CIC3* at Carolina #2016CI

Liz Halliday-Sharp and Fernhill By Night held onto their overnight lead in the CIC2* with a double clear show jumping round. “Blackie,” a 13-year-old Irish Sport Horse gelding owned by Deborah Halliday is another horse preparing for Rolex this weekend. Here’s what Liz had to say about their day:

“He really jumped great. It was one of the best rounds I’ve had on him for a long time. It just felt like a really good, positive, flowing round. He can be tricky in the mouth a bit, but he felt pretty good and on the job and switched on. I really enjoyed it.”

On Ian’s course: “I think it’s a good two-star course. It’s forward going, which will suit him. It’s always nice to win, but my main job tomorrow is to give him a good ride. I think it’s most important that he has a good positive round and comes away from it feeling good about himself.”

Liz Halliday-Sharp & Fernhill By Night defended their overnight CIC2* lead with a clear show jumping round this morning! #2016CI