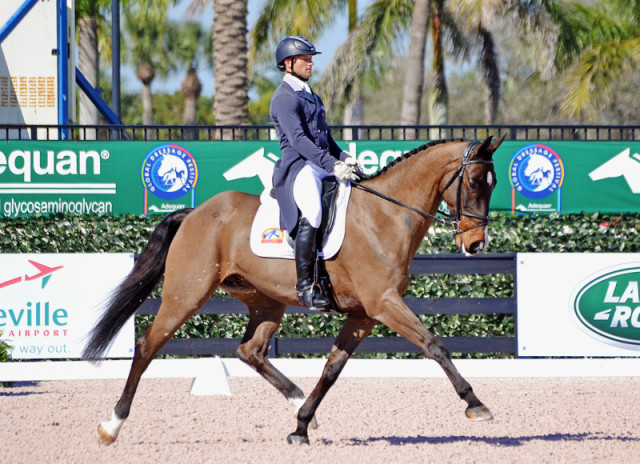 Michael Pollard and Cyrano at the 2015 Wellington Eventing Showcase. Photo by Jenni Autry.

Michael Pollard is a well-known name in the eventing world, what with representing the U.S. on the international stage, producing talented young horses through Chatsworth Stud, and indulging his entrepreneurial side with numerous other businesses. We were fortunate enough to grab a few minutes of Michael’s time to get to know him a bit better, and we’d like to thank him for answering all of our burning questions!

EN: What has been your biggest career highlight to date?
Michael: The Pan Am Games (in 2011) — the (gold) medal would be the biggest thing. When I’m nervous about a round, I always think about the fact that I left the start box at Burghley and it all ended up ok. But I have to say my best experience overall was the Pan Ams.
EN: What event is on your competition bucket list?
Michael: I’d be very disappointed in my career if I don’t have a chance to do Badminton. I used to have every Badminton video as a kid, and I used to watch them endlessly. It’s like Burghley — it’s not for every horse, but if you have the right horse, it would be a dream.
EN: Who was your riding idol growing up?
Michael: I had a lot, but certainly Mark Todd; when he was at his very peak was when I was just getting involved with eventing and I thought he was just incredible. I probably read his book 4-5 times in a month. He really elevated the sport to a whole new level by being so proficient in all three phases.
My body type is very different from his, so I won’t ever ride the way he does, but the smoothness and quality he produced is something I’ve always wanted to emulate.
EN: What’s the biggest compliment you’ve ever received?
Michael: When your students or clients want you to catch ride a horse for them. Giving your horse over for a ride is one thing, but actually taking it to a competition shows a lot of trust. I think it’s the biggest sign of respect to get that from peers or people that work with you, and the biggest compliment, as a rider, that you can get.
EN: What’s one piece of advice you would give to someone just starting out in the sport?
Michael: I was told one time that it’s kind of a “war of attrition” — a lot of the people who make it are the ones who stick with it, not necessarily the most talented or the ones with the most resources. It’s mostly those who stay with it and try to improve every day. The sport can be so disappointing, and you need to set goals but at the same time you have to be in it for the long run and enjoy the process. 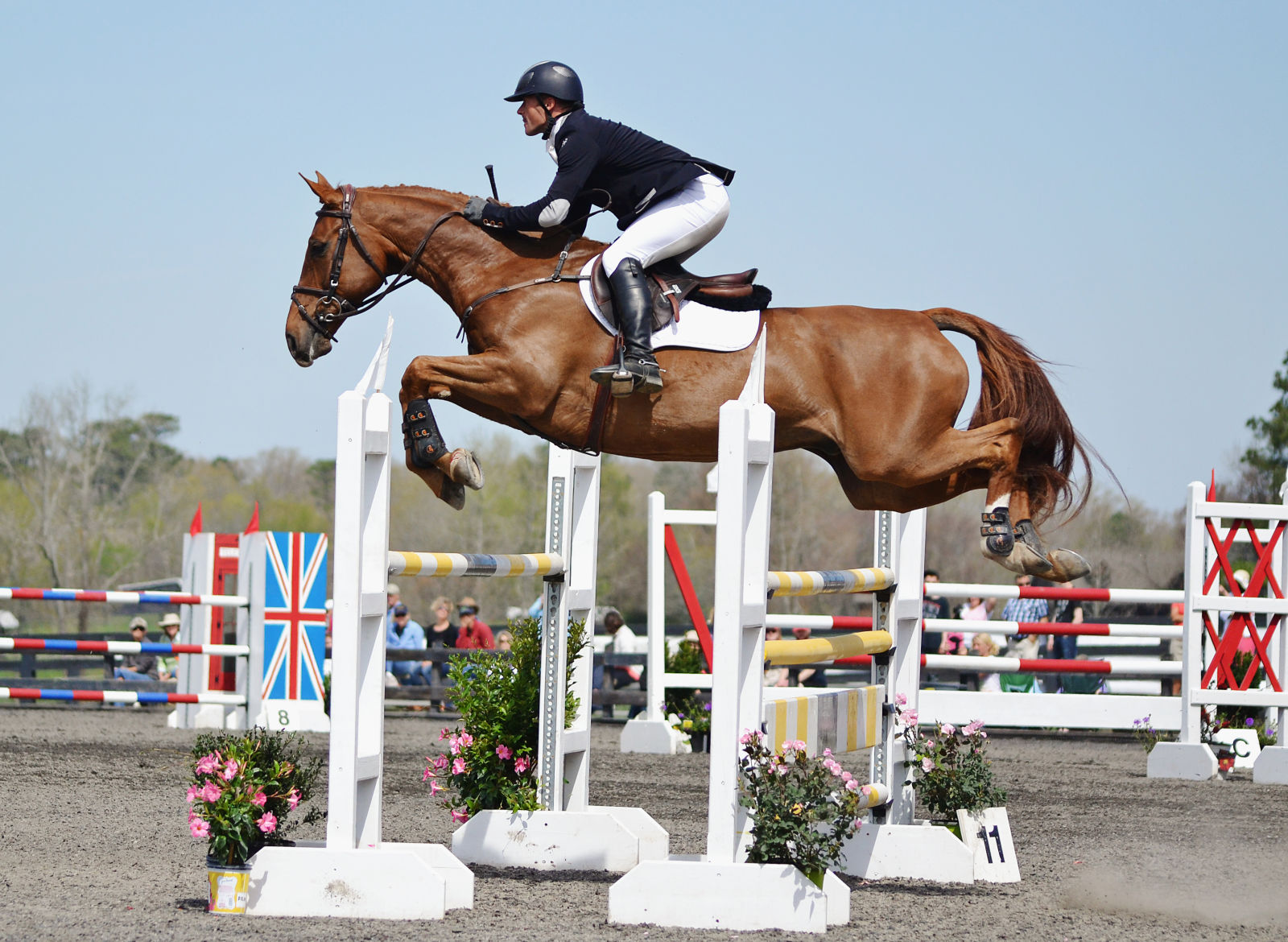 EN: What are you doing when you’re not working?
Michael: The best thing to do is watch a movie with my kids. That’s my most fun thing to do to completely relax — just hang out in bed with the family.
EN: What would you be doing if you weren’t involved with horses professionally?
Michael: I enjoy the challenge of starting and running businesses, and I really like doing larger events and event promotion. I’d probably be doing a lot of what I’m doing now! The horses have led me down a path, but I’m interested in a lot of things. But I love to start businesses, and I’m sure I’d find another one to dive into.
EN: What horse would you love to take around Burghley?
Michael: I’d love to ride Vittoria Panizzon’s horse, Borrough Penneyz, more than anything in the world. That horse looks like so much fun. Of course, whenever you see a horse, you think they look fun but meanwhile the rider knows all the quirks and would probably laugh and say “Have fun!” if you tried to ride! But as far as a horse that looks like it has a lot of love for life, that one certainly looks like a lot of fun.
If I can get (Ballingowan Pizazz) fit enough, I couldn’t imagine having more fun than riding him around that; he’s got everything you’d ever want for that course.
EN: Do you prefer mares or geldings?
Michael: I don’t have a preference at all. A lot of times mares have stronger personalities, but that comes with benefits also. It’s more about individuals; (Schoensgreen Hanni) would have been as un-mareish as you could get, and I have had others that are fire-breathing dragons and are still fantastic. I’ve had crazy geldings, too.
The great thing about a mare, though, is that you have the opportunity to breed. It’s so important and forgotten in our sport right now, and I’ve bought more mares recently for that reason. 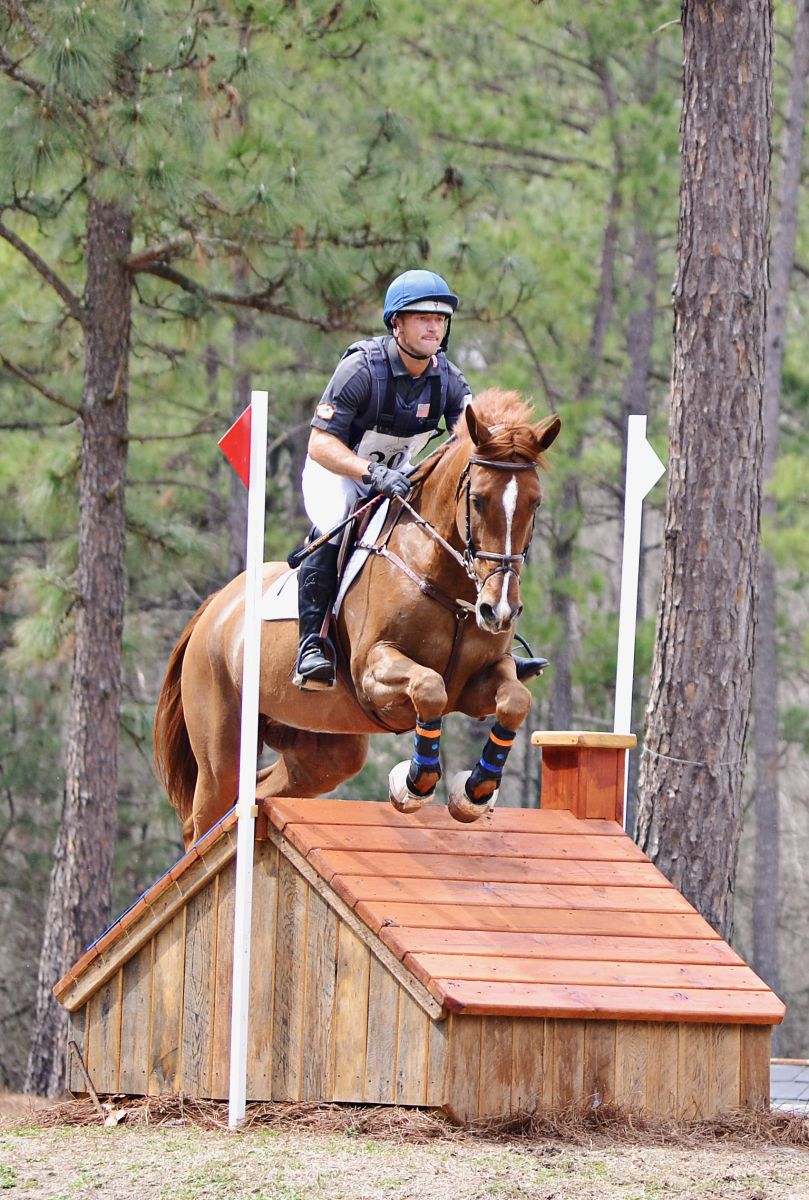 EN: What do you look for in potential new competition or breeding stock?
Michael: I first ask myself if it looks like it’s going to be an Advanced event horse. Can you see it coming in the ring on the last day at Rolex near the end of the division? I wont necessarily discount if they don’t have that “type”, but horses that will go far tend to have a certain look to the way they’re built and carry themselves.
You need correctness and straightness, of course, but I really am adamant about having something that’s got a lot jump. It’s not fun for me to feel like I’m skimming over stuff, I want it to come easily and naturally. That doesn’t mean that I won’t take something on if it has power but maybe needs work on shape or style, but they need to have the scope to jump 1.35m or 1.4m when they’re not tired — that’s pretty serious scope.
A lot of people get caught up in movement, and I want my horses to do well on the flat but I feel that most of that comes from trainability and not necessarily natural movement. If I’m going to compromise on something, I’d rather have a correct and trainable horse versus one with huge natural movement that’s maybe more prone to being unbalanced.
EN: What was your first four-star like?
Michael: Chumbawamba was my first four-star ride at Rolex in 2002. I remember leaving the start box — and I’m still nervous leading up to a four star now! — and back then it felt somewhat overwhelming.
I remember going down to the first couple of fences, and I just repeated to myself, “You really can do this!” The third or fourth fence was a giant corner over a ditch and I missed so badly, it was like a complete chip and the horse somehow figured out how to clear this thing. I think we scraped all the mulch off the top.
After that, I thought “Ok, I can do this but I’m going to have to be a hell of a lot better than this.” I remember thinking “You’ve got to attack this if you want to clear it,” and I got into attack mode from there and from that moment on I had a great ride.
EN: What are your goals for 2015?
Michael: My first goal is to keep the horses sound and get them fitter than I had them last year. Essentially, my top horses were very competitive. I didn’t really have any major problems with the actual cross country — the only problems were horses getting tired.
I’ve been doing different things here in Florida, and a lot of what I was doing last year was an experiment, so now I’m trying to increase things without increasing pressure on the horses’ legs.
I feel that if I can get that right, I can be pretty successful. I think the undercurrent here is that I’ve won a lot of Horse Trials but haven’t done as well at the big events and my goal is to change that.
I’ve put myself in a position to win a lot of these events and have come up short. I believe I’ve got good enough horses and that I can be competitive anywhere in the world, and I’m aiming to prove that.