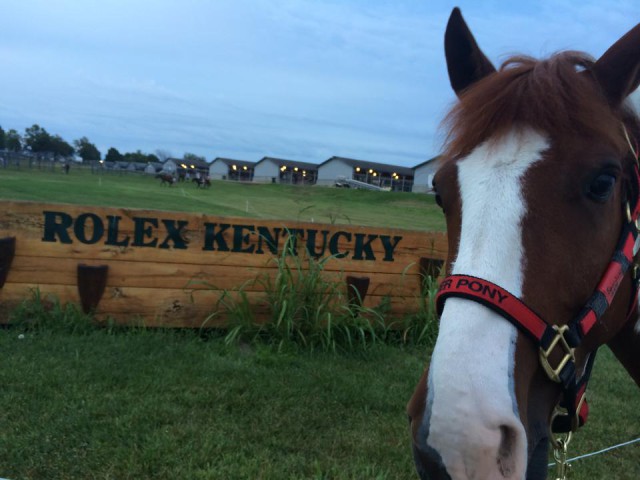 My 14-hand Super Pony studying for what he hopes will be his next trip to Kentucky ... Gotta give the little guy credit — he thinks BIG!

Hey Eventing Nation! Although I had good intentions of blogging every day I am here at the Kentucky Horse Park for the U.S. Pony Clubs Festival Championships, competing as a Pony Club member has really kicked my 30-something butt and has left me exhausted! So here’s a quick recap before I have to go Show Jump:

Day 1 — Dressage: Great warm-up, go into the old covered arena for my actual test and a semi decides THAT  those six minutes would be the best time to drive up next to the arena and pump the air brakes about 20 times. Super Pony was not amused, but the judge was kind and let me re-start my walk section. I was pleasantly surprised with my 34.1, putting me in third place in my division! GOOD PONY! (bad semi!)

Day 2 — Cross Country: Super Pony proclaimed his stall to be an evil jail cell (he normally spends at least 12 hours a day outside), and was a handful in warm up. I jumped about 8 jumps and just figured I would roll with it. After a “pony moment” at fence 5 where he did not believe that the jump was actually a table, he settled in very nicely and gave me a great round. Check out the helmet camera footage below. We handily made the time and were dismissed from the vet box in 10 minutes. I was pretty happy to have such a great go!

Alright … time to give Super Pony a pep talk about keeping the colored sticks in the cups!