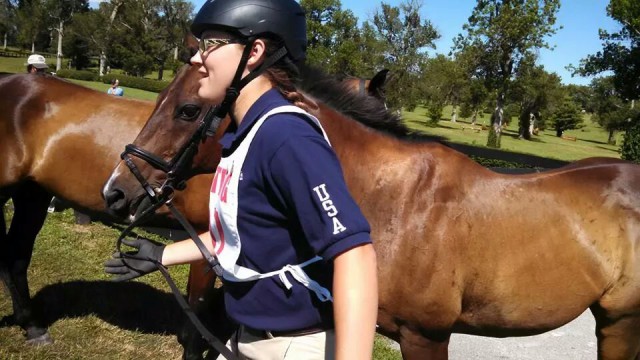 I’m typing this one-fingered on my phone while I sit in the Alltech Arena at the Kentucky Horse Park waiting for the opening ceremony of the 2014 USPC National Championships. I don’t generally like ceremonies of this type, and I’m feeing hot, cynical, and tired. But I wanted to share this photo with you.

It’s my daughter and her horse at the first jog this afternoon. They’re competing on a Novice event team. You can barely tell, because of her pinny, but the shirt she’s wearing is actually part of the official uniform from the 1998 World Equestrian Games. It was formerly owned and worn by an eventer you may have heard of, one David O’Connor.

Every year at O’Connor Camp we have a team Jeopardy competition. I’m usually damn good at it, as it combines my native competitiveness with my ability to retain arcane bits of information.

Alas. My daughter is even more competitive and arcane then I. And this year the prizes were really awesome: she won that shirt.

She wears it well.