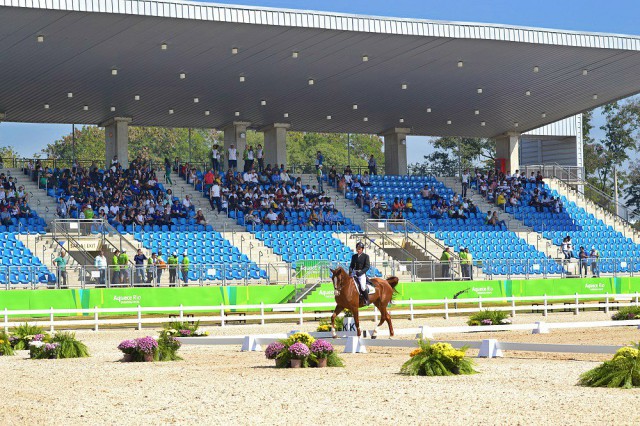 The view of the main stadium at Deodoro, site for the equestrian events at the 2016 Olympic Games in Rio. Photo by Leslie Wylie.

Concerns that the 2016 Olympic equestrian events could be moved out of Brazil have been swirling since Luiz Roberto Giugni, president of the Brazilian Equestrian Confederation, revealed that the Brazilian Ministry of Agriculture still has not approved equine import and export for the Games.

“If the problem is not resolved by the end of the month, we run the risk of not having the event in Brazil,” Luiz said while speaking at an event in Sao Paulo on Wednesday.

The documentation is specifically required to allow horses from the U.S., Canada and Europe to enter the county, Luiz said. But Agriculture Ministry officials have said Brazil is on schedule and has until 120 days out from the Olympics to secure the necessary approvals.

“We have been working for some time with Rio2016, the Brazilian and Rio Authorities and the Brazilian Ministry of Agriculture to get the Veterinary Certificate and Protocol approved that will define the conditions for importation and exportation of the horses that will compete at the Rio Olympic Games.

“The process of approval of the equine health certificate by the Brazilian Ministry of Agriculture has already taken a lot of time and is still not finalised. This has an important impact as it delays the planning and preparation of the horses that will take part in the Games.

“As the President of the Brazilian Equestrian National Federation, Luiz Robert Giugni has supported us very actively during these negotiations and we appreciate that in his efforts to help the equestrian community in the discussions with his compatriots he is applying all possible pressure to achieve this.

“We have had further discussions earlier this week, and I expect the Ministry of Agriculture to issue this certificate very soon so that we can carry on with preparations for the Olympic Games and that the biosecurity protocols will ensure the safe import and export of the Olympic horses.

“Therefore we are confident that our horses will be allowed to travel back and forth to Rio to participate in the 2016 Olympic Games together with all the other Olympic sports. We are looking forward to very successful Olympic equestrian events in Deodoro next year.”

Stay tuned to EN as we continue to track the process of securing equine import and export protocols for the 2016 Olympic Games in Rio de Janeiro.

[Rio Olympic Equestrian May Be Moved Out of Brazil]