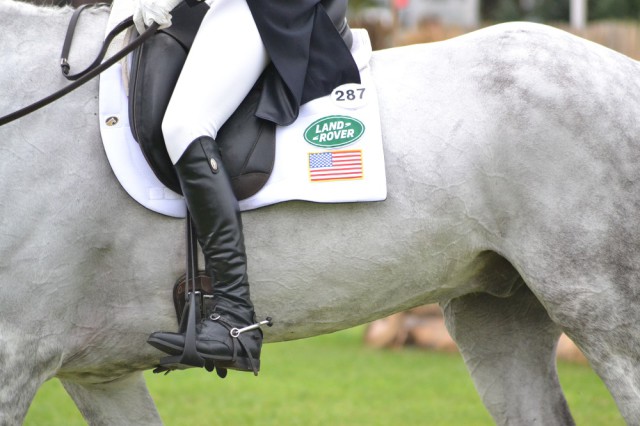 American event riders. You give them matchy-matchy jackets, saddle pads and coolers and suddenly they’re piled all atop one another on the leaderboard, like they’re from the “United” States of America or something.

At the conclusion of dressage here at the Boekelo CCIO* five U.S. riders are within less than a point of another, ranging from Marilyn Little and RF Scandalous‘ 45.50 to Matt Brown and Super Socks BCF‘s 46.40. What a bunch of lemmings. Could you be any less original, guys? Get your own dressage scores. Geez.

A recap of today’s dressage action:

Matt and Super Socks BCF, a 9-year-old Irish Sport Horse gelding owned by the Blossom Creek Foundation, set the tone with their seamless morning test. Between the jumbotron and the flags and the people and the tents and the Ace of Base they had cranked up over the loudspeakers, there’s a lot of atmosphere here to take in but “Flaxen” handled it all with aplomb. The judges clearly “saw the sign” (Ace of Base pun!),  as he pretty much earned straight 7s from all three of them on collective marks. We’re looking forward to seeing an equivalently solid showing from this pair on their first overseas cross-country expedition tomorrow. 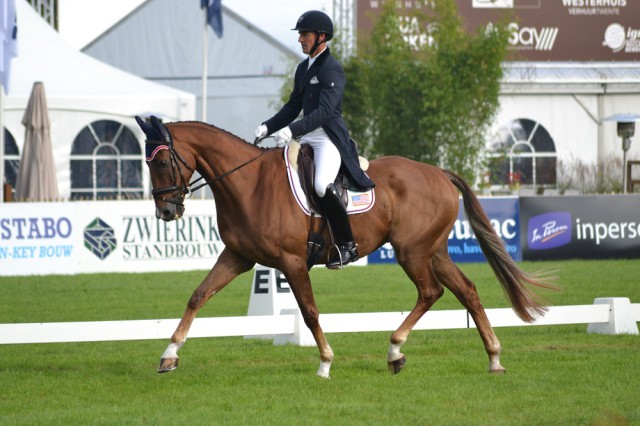 Matt’s take on their test:

God bless this horse. After putting poor Jon through his sports psychology paces in the warm-up, he collected his wits and channeled all that energy into an expressive display of dressage showmanship. Perhaps as a “just kidding, dad!” apology for his pre-test pranks, he scored two 8s and an 8.5 on the halt preceding reinback as well as an 8 collective mark for submission from the judge at H.

“Will,” an 11-year-old Thoroughbred/Trakehner gelding owned by Constance Holling, bested his 2012 Boekelo CCI3* dressage score today by 3.4 points. Having jumped clear around this track once we can’t wait to see him tackle 2.0 tomorrow.

Sidenote: Whereas yesterday’s dressage DJ was playing mostly classical stuff, today’s was exhibiting a bit more derring-do. When Meredith Brooks’ “I’m a B!tch,” which I last heard in probably 1997, came on over the loudspeakers halfway through Jon’s test I’m sure I wasn’t alone in doubling over laughing. 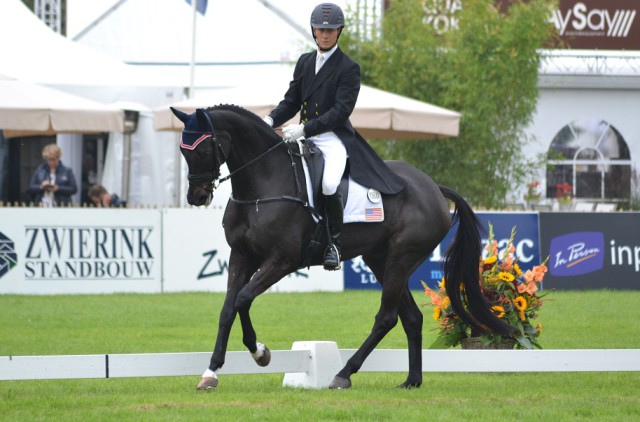 We’ve seen a lot of fancy, foot-flipping horses in the sandbox these past couple days, and Landmark’s Monte Carlo might not sport the fanciest three-piece suit when it comes to movement. But Lauren says “Patrick,” a 9-year-old Irish/Thoroughbred cross owned and bred by Jacqueline Mars, may be the brokest horse she’s ever ridden and that’s going to come in handy when they go to tackle the twisty, technical cross-country course that lies in front of them tomorrow. The track is a constant test of “Are you listening? Are you listening now?” and I expect that Patrick will respond with a “yes.” 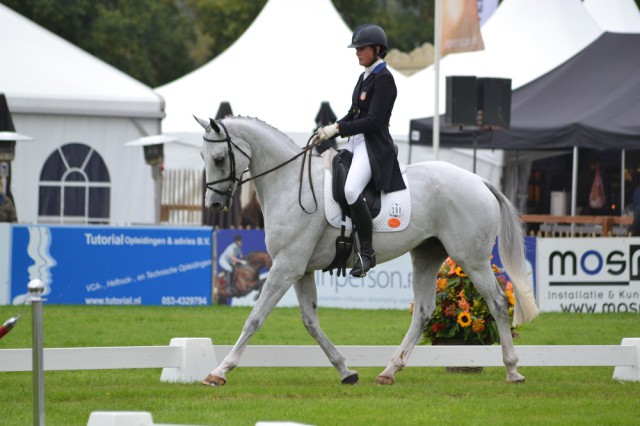 Carlevo, an 8-year-old Holsteiner gelding owned by Carlevo LLC, is a relatively new ride for Buck. He came over from Germany earlier this year having previously competed with Dirk Schrade through the CIC2* level. Buck moved him up to Advanced at Jersey Fresh in May, where they jumped clear and nearly on the time cross-country.

When I saw this horse go in the CIC3* last month at Richland Park, his esteemed barnmate Ballynoe Castle RM just barely one-upped him in the dressage, leaving him tied for second even with points still left on the table. (I couldn’t resist asking Buck today my burning questions about what it’s like to ride this horse’s world-class extended trot. Is it like floating on clouds, or playing in a bouncy-house? Inquiring minds wish to know.) Buck thinks highly of this horse and Boekelo marks his first CCI3* — go big or go home, right? Smart money is on going big. 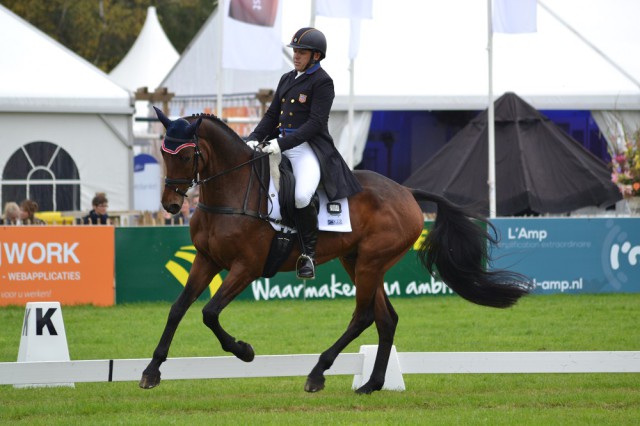 At 7 years old “Fitty” is the youngest horse in the Boekelo field, but he’s as precocious and talented as they come and with Marilyn as his mentor this is an exciting pair for the future. The big atmosphere got to him a bit today, but the Oldenburg gelding owned by Raylyn Farms shows so much promise that a higher-than-usual dressage score today seems like a small price to pay for the experience he is gaining.

With four Americans going within the span of just over an hour, I was on photography duty and didn’t get the chance to catch up with Marilyn and Fitty after their test. However, I look forward to hearing all about their successful, educational cross-country round tomorrow! 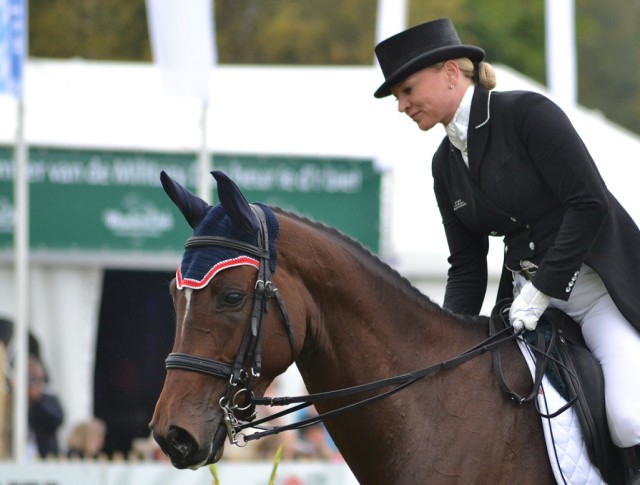 I lost Liz to the post-test chaos void as well but can testify to the fact that she and “Cooley” had a lovely test, as evidenced by their top 25 score.

The 11-year-old Irish Sport Horse gelding owned by Deborah Halliday will be in his element tomorrow; that dapple-grey coat will need the bath of a lifetime if they do it right on cross country. As Jenni noted in her Boekelo preview, however, “Cooley is a good tough mudder, which he proved at Breda last month with a clear cross country effort around a very sloppy track to finish 12th in a huge CIC3* field.” See you on the other side, Liz and Cooley! 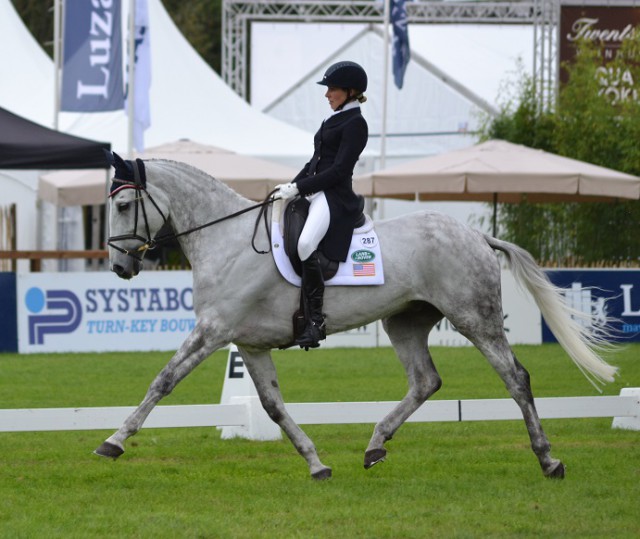 On non-U.S. fronts, New Zealand’s Jonelle Price and Cloud Dancer clung fast to their generous lead from yesterday. Their 3.5 point lead over second-placed Bettina Hoy and Seigneur Medicott gives them a bit of breathing room, but this is the Dutch horse’s first CCI3* so anything could happen. Excitement awaits! 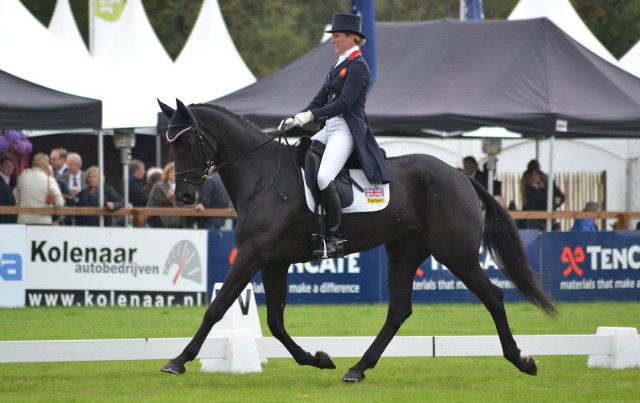 Great Britain’s Nicola Wilson and Bulana moved into 6th place on a 41.3. Germany’s Bettina Hoy/Seigneur Medicott (2nd) and Australia’s Christopher Burton and Monarchs Exclusive (5th) also played a role in shaking up the top of the leaderboard. Photo by Leslie Wylie.

Don’t forget that there’s a livestream available, should you have nothing better to do early-early on a Saturday morning (or late-late on a Friday night? No judgement here). 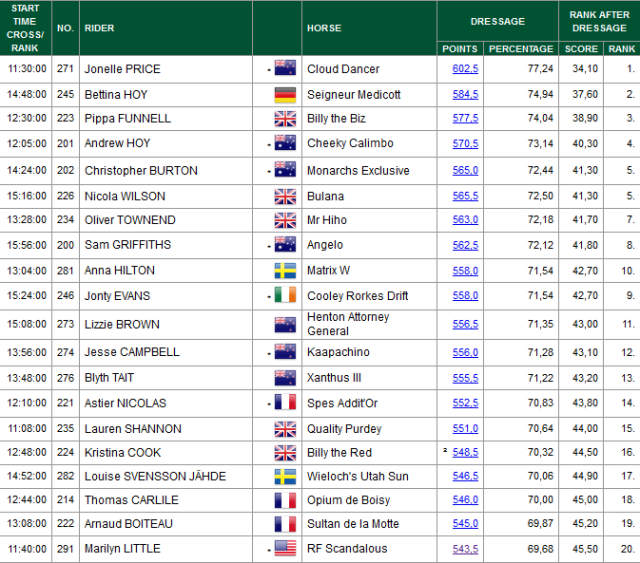 Cross-country begins tomorrow at 10 a.m. Netherlandia time with Ireland’s Simon Porloe and Padraig McCarthy. Buck and Copper Beach will trailblaze for Team USA at 10:16. If you have math issues like I do, I posted a time-zone translator here.

Cross-country preview coming up next, and much, much more to come! Go red, white and blue, and Go Eventing!