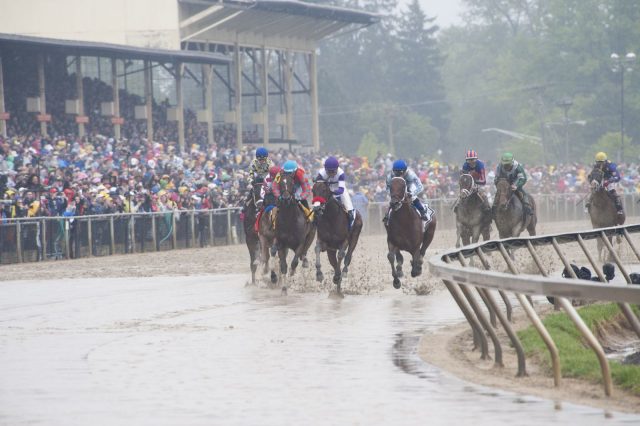 All the 2019 Preakness Links You Need:

Distance: A mile and three sixteenths over dirt

Stats: For details about each horse, see Preakness.com. You can also get a quick preview of the field (and vote in our poll!) by reading our coverage here.

Online Betting: If you’re looking to up the ante, a variety of online betting sites are at your service. We recommend Twinspires.com for ease of use – it has all the bells and whistles for experienced bettors, but it’s simple enough for novices to use as well. Brisnet.com is another useful resource. Gamble responsibly.

…plus one you don’t.

The Preakness: Remembering Pimlico infield’s ‘Running of the Urinals’. Because why not. Keep it classy, Preakness.

War of Will finished seventh in the Kentucky Derby, and was one of the horses affected in the controversial move by Maximum Security.

Bourbon War has yet to win a stakes race; his last start was a fourth-place finish in the Florida Derby.

This is a massive step up in class for Warrior’s Charge, but stranger things have happened… or have they?

Improbable, with his all-star connections (the same combination of trainer, owner and jockey as Justify… just sayin’) is the easy morning line favorite. He finished fifth in the Kentucky Derby, becoming officially fourth with the disqualification of Maximum Security.

Owendale’s last start was his win in the Stonestreet Lexington Stakes. He is Brad Cox’ second trainee in this race.

Market King had a disappointing run in his most recent start, the Blue Grass Stakes, while he was a bit stronger in the Rebel Stakes.

Alwaysmining is an accomplished black type stakes winner, with 12 starts and seven wins already under his belt. A win at Pimlico for a Maryland-bred would be a hometown success story.

While Signalman doesn’t have the major wins of some of the other contenders, he’s certainly clashed with them before and come away respectably.

Bodexpress finished 13th in the Kentucky Derby, and is back for redemption, looking to improve on his second place in the Florida Derby. He’s never won a race.

Everfast has certainly given stakes races a good shot, but his recent performances have been fairly poor. He’s the long shot.

Laughing Fox has never placed better than fourth in a graded stakes, but his most recent start was a win in the Oaklawn Invitational.

Anothertwistafate did not qualify for the Kentucky Derby, but his recent form has been improving in graded stakes.

Win Win Win was a fan favorite for the Kentucky Derby where he finished 10th (placing ninth).