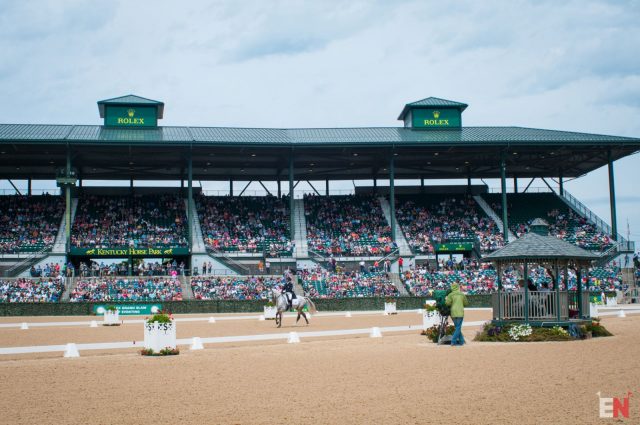 An unprecedented outpouring of public support and a grassroots fundraising effort have led to a reversal of the announced cancellation of the Land Rover Kentucky Three-Day Event CCI Five Star presented by MARS Equestrian™ (LRK3DE). A new partnership between Equestrian Events, Inc. (EEI), producer of the world-class event, and the Kentucky Horse Park Foundation combined with the support of US Equestrian and longstanding sponsors Land Rover, Mars Equestrian, and Rolex will ensure that the CCI5*-L three-day event will be held, without spectators, alongside a new CCI4*-S, April 22-25 at the Kentucky Horse Park in Lexington, KY.

“The uncertainties surrounding the COVID-19 pandemic placed us in the financially impossible position of having to run the Five Star event without spectators, a situation that left us no choice but to cancel the Five Star for 2021 in order to preserve it for many years to come,” said Mike Cooper, president of EEI. “We are humbled and honored by the response of the eventing community as they’ve stepped up in a mind-blowing way enabling us to go forward.”

A fundraising campaign was started by athletes and fueled by the grassroots effort of the broader eventing community, generating more than $550,000 in donations to run the event. “While that still leaves us short of the amount needed, it is enough to convince us that the balance can be raised,” added Cooper. “We are now, with the assistance of the Kentucky Horse Park Foundation, committed to going forward with the Five Star.”

In the new partnership, EEI and the Kentucky Horse Park Foundation, both 501(c)(3) non-profit charitable organizations, bring strong and distinct skill sets – the Foundation in fundraising and EEI in event management. Using their respective expertise and resources, the Foundation will take the lead in soliciting donations to supplement the grassroots effort, and EEI will focus its attention on running the nation’s premier equestrian event in an environment that is safe for all during the current world-wide pandemic.

“Seeing the athletes, community, our sponsors, and these two organizations, the KHP Foundation and EEI, come together in a united way to allow the CCI5*-L and CCI4*-S to go forward despite the challenges presented by the pandemic is nothing short of remarkable. This will allow our athletes and horses aiming for Tokyo this summer the best opportunity to qualify and prepare, while ensuring the safest possible environment for participants seeking to complete a CCI5*-L or CCI4*-S,” shared Bill Moroney, Chief Executive Officer of US Equestrian. “We extend a huge thank you to all involved, especially to our sponsors, for their flexibility and continued commitment to this event.”

“We are thrilled to return as the title sponsor for the 2021 Land Rover Kentucky Three Day Event CCI5*-L, CCI4*-S and support the event broadcasts on NBC, NBC Sports Network, and USEF Network so everyone can watch this historic event from the comfort of their homes. We applaud the efforts of the equestrian community who have gone above and beyond to raise funds to support this event and ensure another great year of world-class eventing can take place at the highest level at the Kentucky Horse Park,” said Michael Curmi, Director Brand Experience, Jaguar Land Rover USA.

“We applaud the efforts of so many organizers, fans, competitors, and sponsors, supported by MARS Equestrian, which will allow the CCI5*-L competition to continue forward in 2021. This event is an equestrian treasure we are proud to sponsor as we all look for safe ways to hold top level competition,” stated Geoffrey Galant, VP Mars Equestrian.

Spectators are not allowed at this time, but USEF will continue to monitor the effects of the pandemic to determine if a limited number of spectators can be permitted at some point closer to the event with priority given to 2020 rolled over ticket holders. Those who paid for the 2020 event and chose to roll their money over for 2021 will have the option of full refunds or rolling their money over again for 2022. “Ticket holders can expect an email regarding their options, one of which will be to join this incredible grassroots movement on behalf of the sport of eventing,” said Cooper. “Those who wish to do so can donate some or all of the money they’ve paid. We applaud and thank everyone who has contributed so far; without you there would be no Five Star this year and all of you have our utmost gratitude and appreciation!”

Those wishing to be part of the growing movement to save the Land Rover Kentucky Three-Day Event Five Star can do so through the Kentucky Horse Park Foundation website.