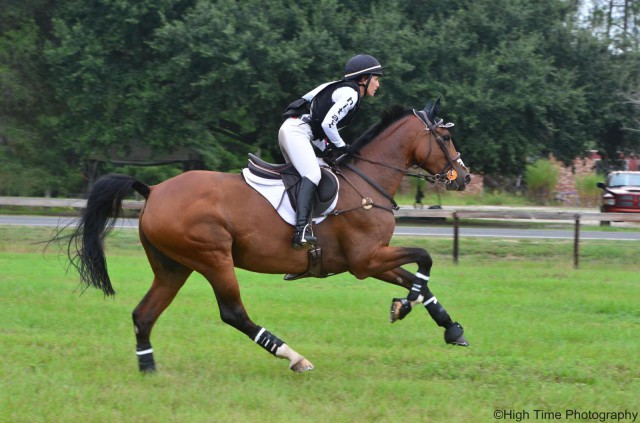 Schooling a green horse on cross country could be described as anywhere from thrilling to nerve-wracking to downright frightening, and leave you with feelings of pride, exhilaration or desperately in need of a stiff drink. These emotions, in my humble opinion, are affected not only by your own confidence and skill level, but also the fact that it is difficult to predict how your inexperienced horse will take to running and jumping over solid obstacles. Will it fly high or put on the brakes? Will it love cross country as much as you do?

During a recent cross country mini-clinic with Dana Cooke at Kingfisher Park in Mooresville, North Carolina, there were several inexperienced horses in the Starter and Beginner Novice groups. I had two there myself: a 5-year-old doing her very first cross country school and a pony who has done several Starter trials.

Throughout each lesson, the same themes kept emerging. Rule #1 was to make the experience a positive one. To do this, help the horse understand the questions they face, offer liberal praise and build their confidence so that they learn to enjoy cross country and not feel stressed about it.

There can be quite a lot to look at on a sunny Saturday at a popular schooling venue, and Dana stressed that it is fine for a horse to have a look around and take some time to settle, but as long as it wasn’t taking off, try not to hold a tight contact, she said. Use frequent half-halts, but try to let go and give them the chance to hold their own speed and balance. Slow your posting down to help set a pace and keep your upper body back so you aren’t inadvertently encouraging them to rush forward. By doing this, you are helping the horse learn to relax, instead of constantly hanging on them to slow down, which can cause stress and anxiety for both horse and rider.

Start over small, simple jumps and repeat the effort until they are quietly negotiating the fence. If they try to rush or don’t understand the question, let the horse walk towards the fence on a straight line so they have time to see it and ask them to trot a few strides away from the fence. Here again, Dana had the riders keep their hands deliberately forward so as not to pull back and confuse the horse. Soon the horses would pick up the pace on their own once they were on a straight line to the jump and approach it in a soft, relaxed manner.

It is of course not unusual for a green horse to stop at a fence while schooling, and I feel like the general consensus of professional riders I’ve worked with is that you don’t punish the horse for stopping the first time because it doesn’t understand the question. Teach the horse to “solve the puzzle” and have confidence in itself instead of bullying it over fences it’s afraid of. If a horse stops, you can let the horse look at the jump and circle back to approach again, but Dana prefers to keep the horse’s eye on the fence until it’s been cleared.

If a horse stopped in front of a fence during lessons, Dana had the rider back the horse up quietly several steps in as straight of a line as possible. Then they moved forward again straight away to jump the fence. By doing this, the horse never turns away from the fence but has some extra time to see and understand the question before continuing on from a safe distance. For this exercise, Dana said she teaches all her horses to back up early on. It is important to note that the fences were no more than 2’7″ in height.

Introducing a green horse to water and ditches can be the most “interesting” part of a schooling day. Having a lead horse is helpful, but giving the horse time to see and understand this new question is paramount. Dana said “don’t pull back, just steer.” Grabbing mane or having a neck strap is useful so you don’t catch the horse in the mouth if they over jump the first few times. Repeat the effort several times until they are confidently trotting through the water and hopping over a ditch. Walking quietly towards the obstacle and then trotting confidently forward several strides out worked well in these situations as well.

The takeaway is to make cross country schooling a happy and positive experience for a horse — especially a green horse — from start to finish. Their confidence will build as they go and they will relish from the praise of a job well done.

Dana Cooke has been the Director of Equestrian Activities at Kingfisher Park Equestrian in Mooresville, N.C. since January 2015. She is an “A” Pony Club graduate and an Equine Canada Level 1 certified coach. Dana is aiming for the Bromont CCI2* with FE Ophelia and Forever Young, both owned by Kingfisher Park, and hopes to represent Canada at the 2018 World Equestrian Games. Kingfisher Park is situated on 200 rolling acres of land north of Charlotte, NC. It is a popular venue for cross country schooling and host to clinics and schooling shows throughout the year. Click here to learn more.