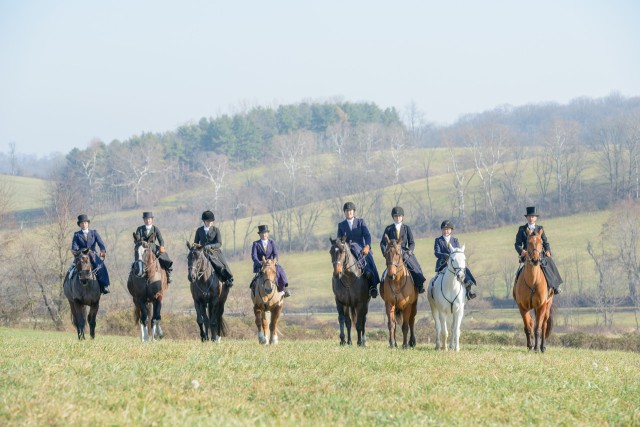 If you’re a fan of racing, eventing, fox hunting and all things horse sport, you’re in for a treat. Smack dab in the heart of Cheshire Hunt Country, the 71st running of the Cheshire Point To Point Races will take place Sunday, March 27 on the same property where the Plantation Field Horse Trials are held. The races are a strong tradition to the Unionville community, marking the end of the fox hunting season and the beginning of the spring race series.

This year promises to be even more exciting, as The Mrs. Miles B. Valentine Memorial Side Saddle Race has been added to the day’s race card, marking a resurgence of interest in side saddle competition. The Cheshire side saddle race will kick off a three-race series, and the entry list includes not only Amy Magee, a local Pennsylvania competitor who has competed aside at the American Eventing Championships, but also Susan Oakes, an international world record holder from Ireland.

The ladies side saddle race is expected to be a huge spectator draw, being the first side saddle race held north of the Mason Dixon Line since the 1930s. A display of tradition, elegance and bravery, this year’s race is run in honor of Mrs. Miles B. Valentine, who graced many hunt fields with her style and unmatched horsemanship.

Amy Magee: An Eventer Aside

Amy Magee started her eventing career the conventional way — that is to say, riding astride. She competed her own homebred Aaspen’s Black Diamond, reaching her goal of competing in a CCI* at Morven Park in 2003. On the side, Magee dabbled in sidesaddle, competing aside a few times at the Devon Horse Show.

When respiratory issues forced Amy to drop Aaspen down to a more manageable level, the idea to attempt eventing aside took root. Amy actually found riding aside to be more comfortable after she suffered a riding accident in 2001 which broke her pelvis, back and left hip — as the left leg does little work when riding sidesaddle, the position was a logical fit for Amy who is still weak in her left leg to this day. 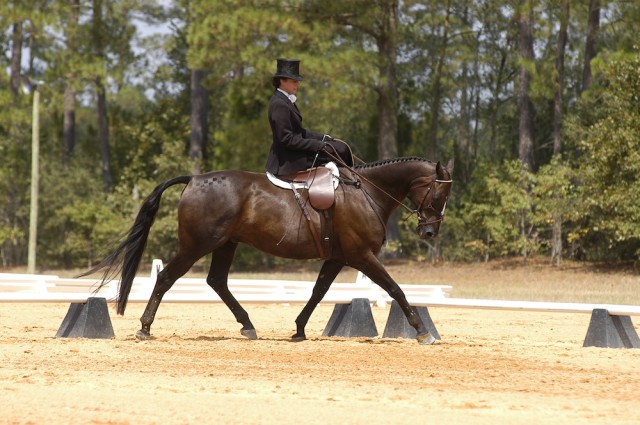 In their first attempt competing aside, Amy and Aaspen placed at Training level at Fair Hill in 2004. This first experience was followed by two wins at Plantation, more placings at other events and ultimately a fourth-place finish out of 66 competitiors at the AECs in 2005 — all while competing sidesaddle. Aaspen was named the USEA Area 2 reserve champion for Training level as well as the Zone 2 and National USEF reserve champion for ladies sidesaddle. 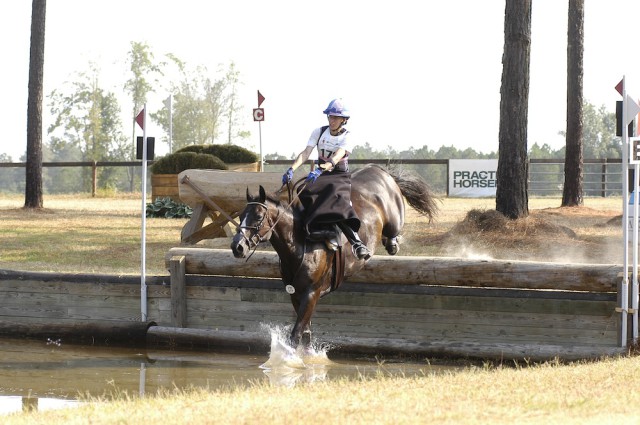 Aaspen went on to compete in sidesaddle hunters and then evented in Beginner Novice and Novice with teen riders. Amy had two children while training and competing a new horse. The idea of sidesaddle riding fell by the wayside, a special bond she had shared only with Aaspen. It took introducing a new rider, a friend of Amy’s, to the art of riding aside that rekindled the idea of taking up sidesaddle again: Amy went hunting aside for the first time since 2005 at Thanksgiving of last year. 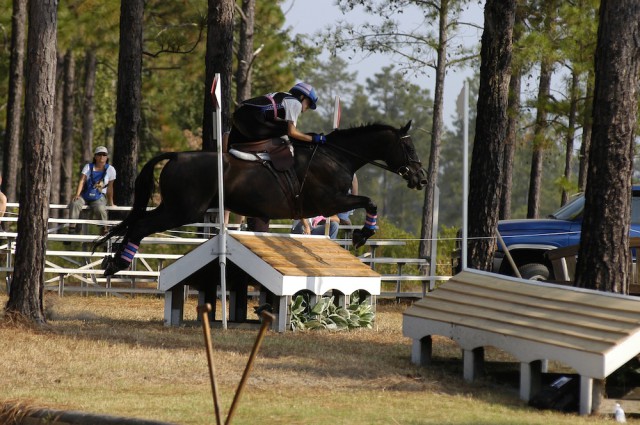 Amy now has plans to compete this season at Novice riding aside, with hopes to move to training at the end of the season — as well, of course, as The Mrs. Miles B. Valentine Memorial Side Saddle Race at the Cheshire Point to Point Races.

“I love helping others take up riding aside,” Amy said. “I love riding aside and it is my preferred method: I always sit a little straighter and smile a little wider when aside. It just makes me feel elegant and feminine. I feel very secure and safe and hope to show others that it is an option for those that wish to pursue it.”

Susan Oakes gained notoriety for hosting the world record-setting most ladies riding aside to hounds and for setting another world record by jumping a 6’8″ puissance wall side saddle. World records aside, Ms. Oakes of Navan, Ireland, is a horsewoman through and through.

Susan Oakes was born into a horse-loving family. Both of her parents rode and embraced her desire to ride side saddle, which began at the age of 4. She hunted with her family and was a member of the Meath Hunt Pony Club in Dublin, with whom she competed nationally and internationally in show jumping, eventing and in triathlons.

Susan also had a keen interest in showing her mother’s Connemara ponies and show horses and has won at the Royal Dublin Horse Show on numerous occasions, both astride and aside. She became the youngest RDHS judge at the age of 16, and now judges in-hand, astride, working hunters and side saddle classes.

She graduated from Trinity College in 2004 and currently has two dental practices in Ireland. Before work, she spends her mornings exercising and training her yard of point-to-point race horses, which she races on the weekends. Her future goal is to set a new side saddle jump record of seven feet or more over a puissance wall in the USA.

Located in the heart of the Mr. Stewart’s Cheshire Foxhounds hunt country, this year’s day of racing promises to be even more thrilling with the addition of the inaugural running of The Mrs. Miles B. Valentine Memorial Side Saddle Race.

The ladies will impress race fans by negotiating 1 1/8 miles of brush, timber and coops typical of inviting hunt country. Riding aside whether for pleasure, hunting, showing or racing is making a worldwide resurgence, perhaps due to the popularity of Downton Abbey, making it a natural addition to 2016 schedule of junior, timber and flat races.

Race and Best Dressed Sponsors for this years race are Middy N Me (who makes the most beautiful American made ladies clothing and sponsors Silva Martin) and Chasing A Fox in A Little Black Dress. The day will not only be thrilling, but will certainly be a celebration of equestrian fashion.

In addition, this race will be the first in a series of three races, including the The Mrs. George C. Everhart Memorial Invitational Sidesaddle Race at Loudoun Hunt April 17 in Leesburg, Virginia and the High Hope Ladies Side Saddle Race May 22 in Lexington, Kentucky. An overall championship will be awarded at the end of the series to honor the season’s high point ladies side saddle rider. 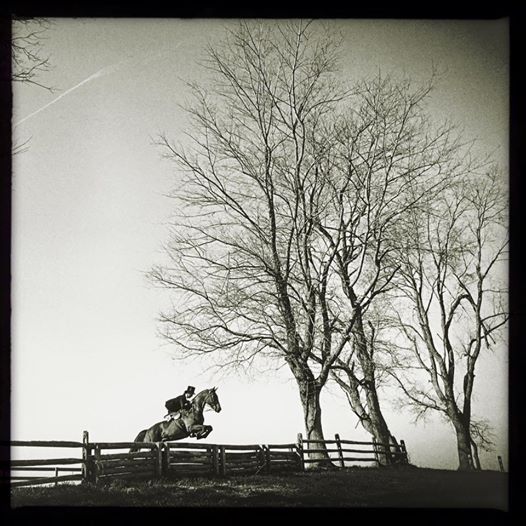 About The Cheshire Races

Founded in 1946 by Mr. Stewart’s Cheshire Foxhounds, the Cheshire Races is located at the Averell Penn Smith Walker Memorial Course at Plantation Field in Unionville, Pennsylvania. In addition to the side saddle race, the day’s schedule features pony races, a junior field master’s chase, a flat race and multiple races over timber including the Cheshire Bowl.

Used as a prep race for the Maryland and Virginia timber racing circuit, many past Cheshire Bowl winners have gone on to win the Maryland Hunt Cup. 2015 winners Mark Beecher and Grinding Speed (trained by Alicia Murphy and owned by Michael Warton) retired the bowl after their third consecutive win. Grinding Speed also went on to be the 2015 National Steeplechase Association’s Horse of the Year.

The first horse to retire the Cheshire Bowl was in the late 1940s was Our Hobo, owned by Mr. & Mrs. Plunkett Stewart, ridden by John B. Hannum III and trained by his wife, Nancy Penn Smith Hannum who was the Master of the Hunt having succeeded her stepfather, Plunket Stewart, who founded the Hunt in 1912. Current race chairman “Jock” Hannum continues to keep this wonderful tradition of the Cheshire Point to Point Races alive for many generations with an eye to the future.

The race committee is grateful to all of their sponsors and supporters, including Glenmede Wealth Management, returning as Presenting Sponsor and to Middy N Me, sponsors of the inaugural Mrs. Miles B. Valentine Memorial Side Saddle Race! Proceeds from the Cheshire Point to Point Races benefit the Cheshire Hunt Conservancy.

For more information about the Cheshire Point to Point Races such as tickets and race day information see the website at www.cheshirepointtopoint.com. Reserved parking and tickets are available through the Hunt Office, which can contacted at 610-347-1918 or [email protected], or at the main gate on race day off of Route 82.