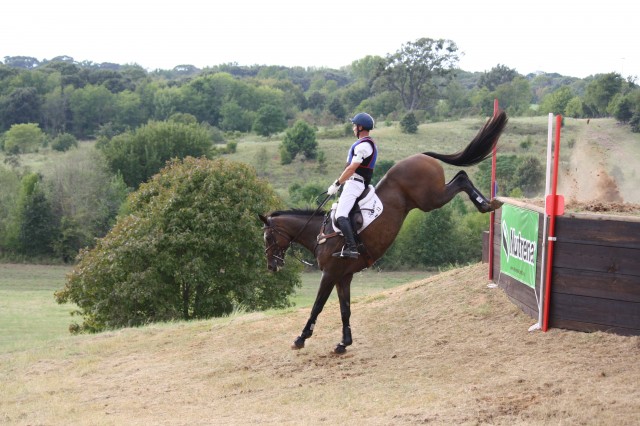 Jon Holling and Proper Timing at the AEC in Texas. Photo by Amanda Ronan.

Hill work is an important component of conditioning the event horse as it builds strength in their hind end, teaches them balance and helps with cardio fitness. You may be familiar with the famous Nelson’s Hill in Unionville, Pa., used by many top riders as well as Team USA for fitness work. I myself was spoiled for a few years by the long, rolling hills of Northern Virginia.

Unfortunately, not everyone in the eventing nation has regular access to hills for this type of training, so we reached out to Jon Holling for advice on effective fitness work for those of us who have no hills, due either to the topography of our town or being forced to leg up for the season while stuck in an indoor.

Jon is based year round in Ocala, Florida, which is famously flat. He takes his top horses to the pool for their aneorobic workouts, but he competes horses at all levels of competition and so finds other ways to build the strength of their hind ends and increase cardio fitness.

Working over poles and raised cavalletti will help get a horse pushing more from its hind end. Start with cavalletti on the lowest side and set four feet apart. Later, roll them over so they are at the next lowest notch, which will get the horse engaging his hind end even more.

For a bigger challenge, increase the distance between the cavalletti to 4.5 or even five feet if the horse is ready, or roll the cavalletti over to the next highest notch and they will really start picking up their toes.

Any type of gymnastics work is beneficial, Jon said, but if you’re going to use bounces, use them in a series. One bounce tends to get them “on their head” while a series of bounces gets them to rock back and push.

Keep the bounces low to start, around 2 to 2.5 feet. Canter back and forth through them several times. Then start placing the rail ends that are on the ground back into the cups one at a time, eventually creating a series of verticals which can be increased in height depending on the level of horse and rider.

Whether you’re stuck inside this winter or doing your conditioning work in a flat field, interval training will help build up your horse’s overall fitness.

“I always start out with a long walk. Then I always do a 20-minute trot,” Jon said. After a warm up at the walk and trot, canter three sets of 4-minute canters with three minute breaks between each set. “As they get stronger and better you can lengthen those canters out. By the time they’re going Preliminary they should be at three 6-minute canters.”

Long trot sets can get pretty boring, so Jon suggests bringing earbuds with you. Listen to music or catch up on the latest podcasts or a new audio book. It’s important to keep your horse engaged in his work, too. “Lengthen on the long side, shorten on the short side, change direction often. Make a game of it,” Jon said.

Work on your own fitness as well, riding in two point for as long as you can and increasing the minutes you stand in your stirrups as your horse increases the minutes of his trot and canter sets.

Your turn, EN. How do you build up your horse’s fitness without hills to climb? Let your community know in the comments and you may give another rider a bright idea!