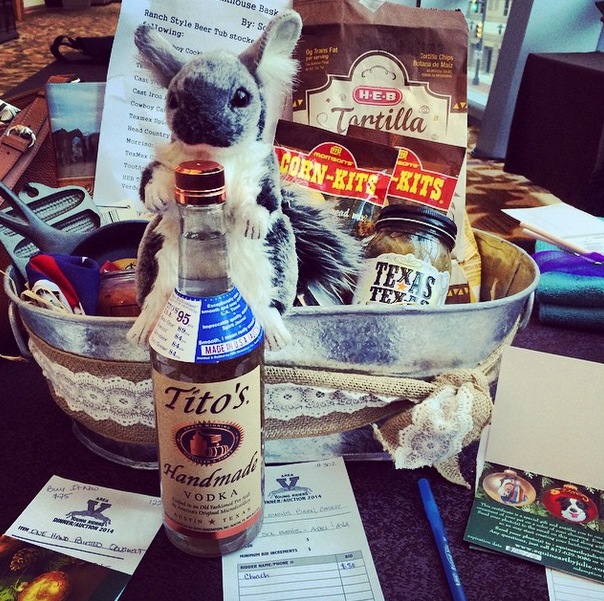 Chinch went to the silent auction while we checked out the Active Athletes meeting. Photo via EN's Instagram.

David O’Connor and Joanie Morris unleashed some key pieces of information in regards to the 2015 Pan American Games in Toronto and 2016 Olympic Games in Rio de Janeiro in today’s Active Athletes meeting at the USEA Convention. Here are the top five things you need to know:

1. Fewer riders are appearing on the 2015 training lists as we get closer to the Pan American Games and Olympic Games for a reason. “The wide net that got cast (after the last Olympics) is getting narrower and narrower as we come down to this year; that’s why you see the lists getting smaller. … Reliability and consistency is a huge part of it.”

2. But that doesn’t mean it’s not possible for a rider to work his or way onto the list between now and Rio. “Someone who hammers away and is consistent will earn their slot,” David said. “It’s going to be up to you. It’s not a pre-selection (for who will be considered for the Olympics), but the list is getting narrower.”

4. The Olympics test event is Aug. 6-9, 2015, in Rio, and the team has a budget to take two horses. Unfortunately, it’s very difficult to get horses back unto the U.S. from Brazil due to a longer quarantine period. Quarantine is much less strict for horses going back into Europe from Brazil, so that might impact who ends up going to the test event.

5. Continuing to build team morale and camaraderie remains especially important with the Olympics in mind, to “know each other’s personalities under pressure,” David said. “Olympic fever is a disease in every way, shape and form. And you never know what that disease is going to do to somebody.”

Stay tuned to EN all weekend as we continue bringing you coverage from the USEA Convention. Follow us on Twitter here for updates throughout the day, and be sure to follow along with Chinch’s exploits on Instagram here. Rumor has it he started bidding on a bottle of Tito’s Vodka at the Area V Young Riders Silent Auction.

Must Reads from Today at the USEA Convention:

[David O’Connor Talks ‘Getting Off the Island’]