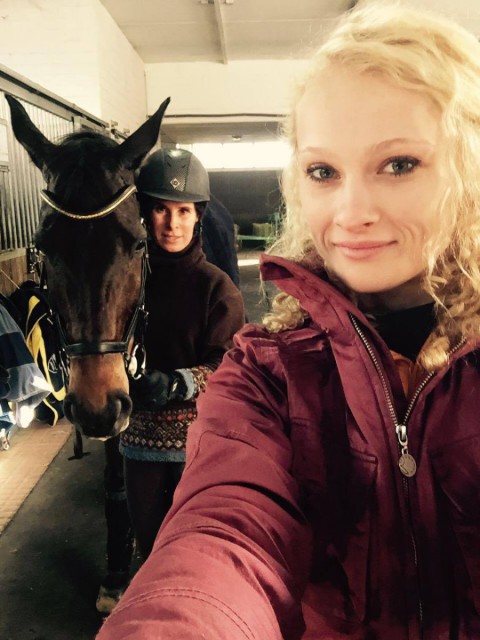 Being the daughter of two former Area IV event riders, one of whom is also an equine vet, horses have always been a part of 19-year-old Sommer Smith’s life. If you had told her not too long ago, however, that her passion would soon carry her to a once-in-a-lifetime opportunity on other side of the world, she might not have believed you.

The past 14 months have been a whirlwind of learning for Sommer. Throughout 2014 she had been competing her father’s eventer, Fire & Ice (“Harry”), at the Preliminary level, but he was aging and she was eager to take the next step in her riding education. 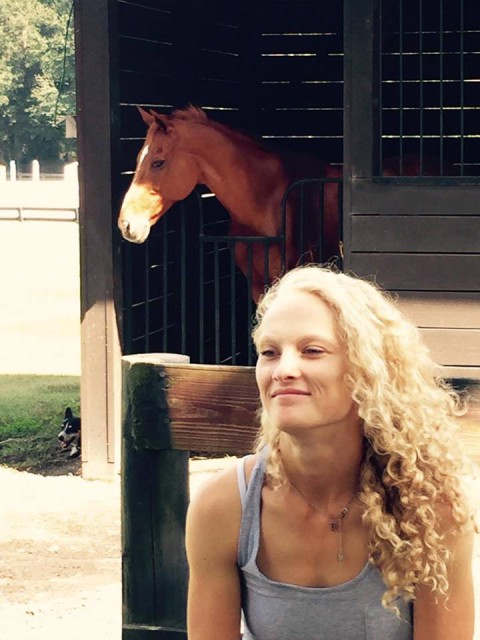 That December she was working at a grocery store in small-town Illinois when she received a call that she’d been accepted as a working student for Pollard Eventing. By early January she had relocated to their farm in Chatsworth, Georgia, where she got her first exposure to the nuts and bolts of a high performance training operation. Under the tutelage of Michael and Nathalie, she honed her stable management skills and learned a tremendous amount from riding a variety of horses. 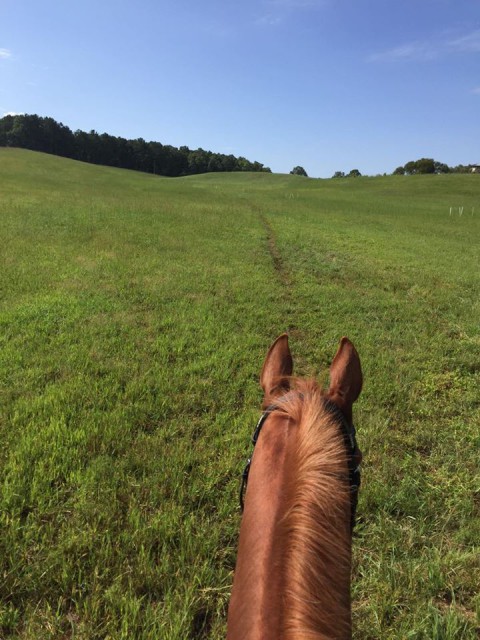 Sommer and Harry heading out for trot sets at Chatsworth Stud. “It’s so beautiful there!,” Sommer says. Photo courtesy of Sommer Smith.

When Michael recently decided to take a break from competing to focus on his businesses and his family, Sommer says the Pollard’s team pondered what they’d do next. But the Pollards had no intention of leaving their crew hanging: “They were determined to place each of us in an area where we could thrive and wanted to keep us all as close as possible. We were and still are a very tight-knit group.”

As close as possible … with one exception.

“One day Michael asked me if I’d be interested in a working student position for Bettina Hoy and if I would be willing to do an interview if he contacted her,” Sommer recalls. “I said, ABSOLUTELY.”

Pursuing the nine-month position would mean a move to Bettina’s base at the DOKR National Equestrian Center in Warendorf, Germany. But after trading emails and phone calls, and Bettina issuing the all-clear after watching a video of Sommer ride, Sommer explains, “The opportunity sounded like something I couldn’t pass up.”

The Pollards did their best to prep Sommer for the experience. “Michael and Nathalie spent hours of their time helping me to better myself before I left,” Sommer says. “They are just really good people who genuinely cared, and I can’t even express the amount of gratitude I have towards them both.”

For most fresh-out-of-high-school teens, moving into a college dorm is a big deal — much less moving abroad. But since making the transition at the beginning of this mont,h Sommer seems to be taking it all in stride. 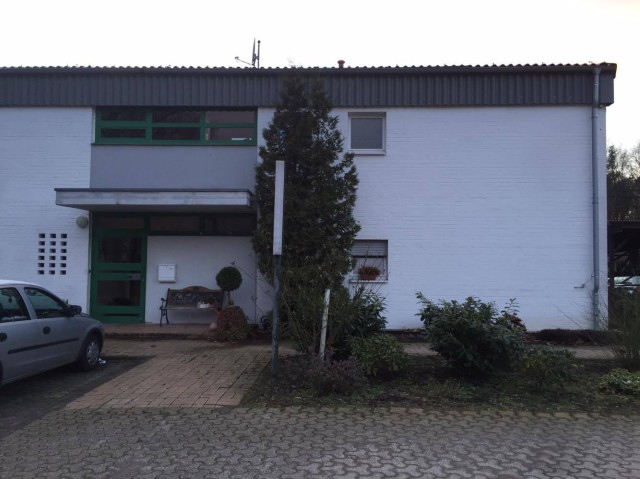 At least her apartment is only about 300 feet from the barn! Photo courtesy of Sommer Smith.

Learning to appreciate the importance of posture, both on the flat and over fences, has been a revelation, she says. “Riding is so much about your posture it’s ridiculous,” Sommer says. “Since my first lesson, everywhere I go I am trying to sit perfectly straight and make it become a natural thing!”

In addition to in-the-saddle work, Sommer has benefited from working with the team physiologist at the Center. “Bettina brought me there to show me a few exercises that I could use to strengthen my back and core area, thus helping me sit the trot more quietly,” she says.

One exercise, for example, involved sitting on a large inflated ball, lifting one leg and turning the torso from left to right back and forth while holding a 10-pound weight in front of her, in both directions. “ The point was to simulate riding a horse as much as possible, all while maintaining a perfect posture,” she says.

Sommer also had a go on “Rock on Ruby,” a mechanical horse simulator that moves in a teeter-totter like motion. “THE Christopher Bartle was there for team training and was kind enough to help me learn balance when the horse is in all positions,” she says. “It is an incredible training aid.” 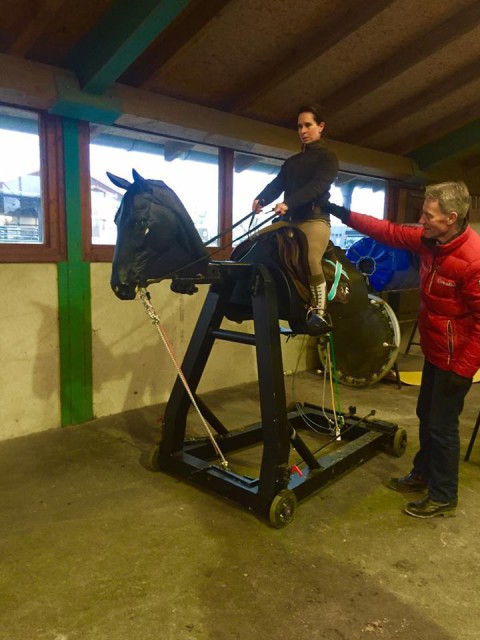 Bettina on “Rock on Ruby” with assistance from Christopher Bartle. Photo courtesy of Sommer Smith.

As for stable management, Sommer says there are several differences between Bettina’s system and what she was used to in the States.

For instance, mucking stalls bedded with straw instead of shavings took some getting used to, and she also does quite a lot of hand-walking in lieu of turnout as it seems to rain almost every day. “I try to get them whenever I have a free 30 or 40 minutes in the day,” Sommer says. “They are out of their stalls to be walked or ridden two to three times per day.” 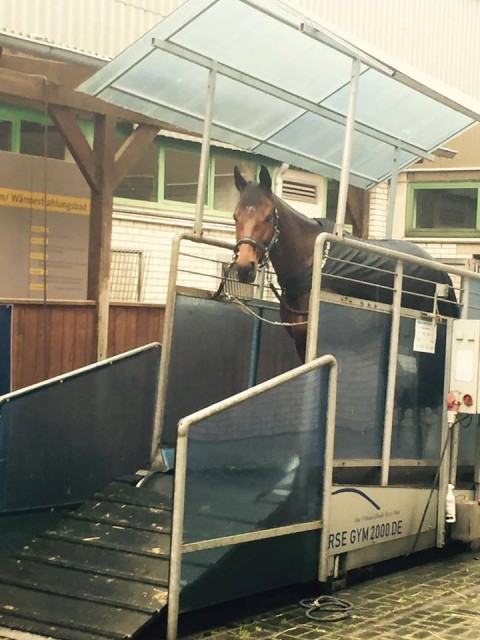 Bettina is also a stickler for in-detail horse care, especially cleaning sweat off the horses after work. “On my first day, she said ‘I know how much I love taking a shower after working out, so you can only imagine what it’s like for them if you don’t clean the horses properly.’ It completely made sense and showed me that she truly cares about their well-being. Then after showers, they go underneath the ‘solarium’ which consists of several heat lamps. That way they dry very quickly and avoid fungus, mud fever and other skin issues” 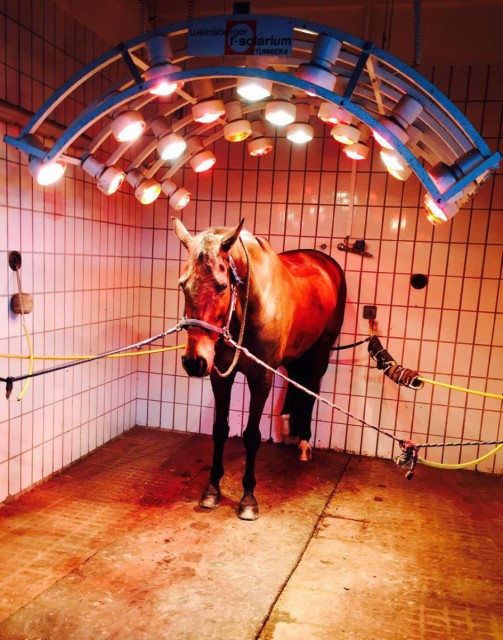 Designer drying in the solarium. Photo courtesy of Sommer Smith.

In early March Bettina and her team will be relocating to England to compete for a few months, returning to Germany later on, Sommer says, “hopefully to be preparing for the Olympics!”

Sommer says that while it’s hard sometimes not to be star struck working around world-class riders, it’s a great exercise in learning how to act and speak like a mature young professional. “As I learned while at the Pollard’s, they are people like you and I,” she says. “Often they’d prefer to be treated that way respectfully, rather than being shy not knowing what to say, which in my case is pretty common!”

Sommer will work with Bettina through the end of October. Beyond that, she says, she’s leaving her options open.

“I am very interested in sharing the knowledge that I will acquire while being here,” she says. “This is an experience of a lifetime, and I just want to share every part of it!”