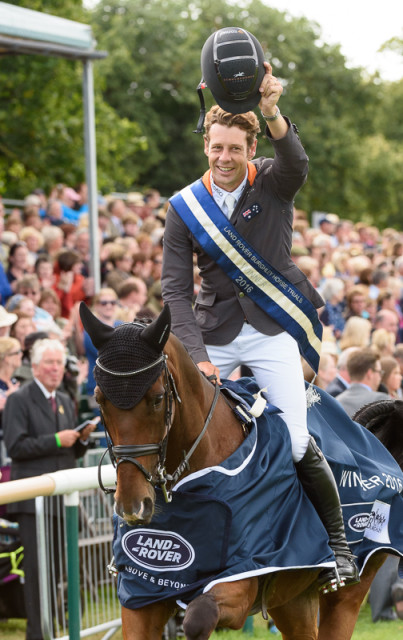 We all know Chris Burton as an all-around ninja who rides cross country faster than The Flash and wins four-stars on catch rides. He’s been dubbed The Speed King by EquiRatings, and the numbers speak for themselves.

Thanks to friend of EN Danielle Surrett, who participated in a clinic this past weekend with Chris, we got to know the speedster a bit more as he took a few moments to answer our burning questions. Many thanks to Danielle for reporting and to Chris for taking the time to speak with us.

EN: What inspired you to become an event rider?

Chris: “Australia had some success in the ’90s, and we won the gold medal at the Atlanta Olympics in 1996 and again in 2002 at Barcelona. And of course it was very exciting for me as a child to see that people were winning gold medals riding horses, which I already loved doing. That’s what got me into it.”

EN: Do you have any superstitions or rituals for competition?

Chris: “I can’t say I’m superstitious, but more when I’m nervous I madly polish my boots. I like to polish my boots as the last thing I do, and then I get my whites on and hop on. When I’m really nervous you’ll catch me sort of frantically polishing boots.”

EN: Can you tell us about your Adelaide win on TS Jamaimo? How did it feel to win a four-star on a catch ride?

Chris: “That was an amazing story. It was incredible. I had a phone call from Wilhelm Enzinger, who had broken his leg falling off a horse. He asked, given that I was an A category rider, would I be interested in riding the horse? And I said sure. My wife and I looked the horse up and saw that he was a very good jumper and said why not? So I booked a ticket, flew down to Adelaide and jumped on him and just unbelievably we connected really quickly and won the four-star. That was really fun.”

EN: What event horse, past or present, would you like to take a spin on?

Chris: “The thing about Michael Jung’s horses and his horse La Biosthetique Sam FBW is that he’s just incredibly well ridden and trained. He’s very sound, and they tell me that he was a difficult youngster but many people have difficult youngsters. I think that is really one of the most amazing horses of all time.

“I’ve had some superstars as well, and I wish I could have them again. I had a black Thoroughbred called Newsprint that was just incredible in every phase, and I’d give my left arm to have him again. There are many, many good horses.”

EN: What has been the highlight of your career so far?

Chris: “One of the most fond memories I have is winning Aachen on Holstein Park Leilani. It was really magical because it was to be her last event. I’d convinced the owners and I said, ‘Look, she didn’t go very well at Badminton. I think she can go better. Can we keep her another few months and do Aachen?’

“It rained and she did the best test of her life. She was never naturally talented on the flat and she did an amazing test. She was always a little bit of work in the show jumping; her heart was in the right place but it was easy to have one or two down, and again she jumped an amazing round. Everything went to perfection.

“And on the cross country, it rained. It was wet and they were all struggling to make the time. She was unbelievable. That will, no question, be the most fond memory for the rest of my career.”

EN: What advice would you give to an aspiring eventer?

Chris: “I believe in tenacity. Don’t give up. Stick with it. If you are tenacious, you will have success come your way. Continue to believe in yourself and continue to work hard. Any top rider in the sport of eventing will have a lot of knocks along the way. It’s those who just keep with it that end up having success.”