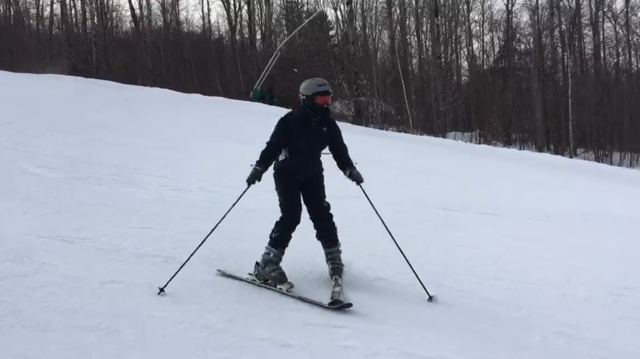 Me, wobbly as a newborn foal.

I started riding horses in pre-school and took to it immediately, but my first snow skiing experience during a school trip somewhere around 8th grade was absolutely miserable. The students were essentially let loose to fend for themselves with little to no instruction for the first timers, and there was no shortage of peer pressure to learn quick and keep up.

Fast forward to the present, and I have the bright idea to go on a ski trip with my boyfriend, Cortney, to celebrate our anniversary. He’s been skiing for as long as I’ve been riding and hasn’t hit the slopes in several years. So I, the rank beginner skier with an irrational fear of heights, booked us a Stay and Ski package at the Omni Mount Washington Resort at Bretton Woods in New Hampshire.

But there were three differences between this ski trip and the first one:

So we skied for two days and I didn’t crash into anyone or fall in a ditch. It still didn’t come exactly naturally to me, but I had fun and got significantly better from beginning to end. But horses are my world, so it’s no surprise that my mind kept drifting back to what’s familiar, and I found myself making constant comparisons between skiing and riding.

1. One of the first things I learned was that the “defensive position” on skis is very different than on horseback. I discovered quickly that scooting into the backseat and jamming your heels down on skis is the exact wrong thing to do and usually resulted in me sliding downhill on my butt instead.

2. Cortney was constantly skiing alongside me (or backwards…show off) and would thrust his hands out in front of him to remind me to keep the poles up and my hands still. There was indeed a lot of arm flailing going on, not unlike a beginner rider with too long reins and an erratic posting rhythm.

3. There was at least one familiar word, and that was “forward.” We hear all the time while jumping, but generally in terms of pace and energy rather than position. So I had to hit the pause button on the eventer’ s running recording of “sit up and kick” and instead began chanting “hands up, look forward, lean forward.”

4. Sometimes you just have to translate things into terms us horse people can understand. One skier suggested to me, “just pretend you’re in a jumping position.” It was totally a light bulb moment. Using phrases like “weight in the new outside leg” and “open/close the knee” was a huge help, too.

Be Comfortable with the Uncomfortable

5. Skiing, like riding, requires body symmetry, and it was a frustrating moment of clarity to discover that I’m weak on the right leg/hip when skiing just like I am when riding. I got a “look” when I shouted across the snow, “I’m not as supple this way!” while attempting to make smoother left handed turns.

6. “Don’t panic, just fix it.” The years of practice responding to the often unpredictable ways of equines actually helped me here. I could breathe, assess and react instead of throwing myself to the ground in desperation when inadvertently picking up speed, losing my balance or crossing the skis (is that akin to losing a stirrup?).

7. I think the biggest comparison that can be made between learning to ride and learning to ski–or any new skill for that matter–is the necessity to overcome fear and push yourself out of your comfort zone in order to improve. You have to accept the fact that you’re going to fall down, and when you do, be brave enough to get back up and try again…You also can’t expect to be totally proficient all at once, which is infuriating for an over-analytical perfectionist like me.

Learning to downhill ski at times felt as frustrating as learning to post the trot, but eventually the pieces clicked into place. And I’ve got say, it’s a pretty satisfying feeling to ski from the summit to the base lodge without crashing. That rush is almost as good as jumping a cross country course clear and fast.