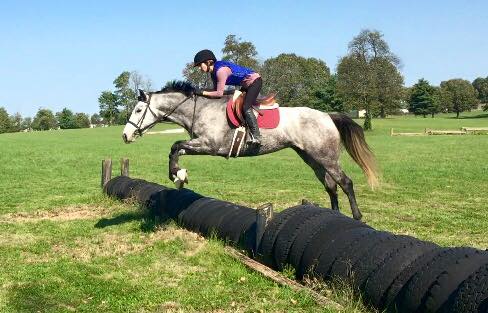 Sudden Danger proving she’d rather lope around a hunter ring than gallop over a cross country course. (She’s a great sport, though!) Photo courtesy of Lindsay Gilbert.

What’s in a name? No, I’m not here to quote Shakespeare, but rather to ponder the equally age-old question of equine pedigrees and if they really matter.

For years, I went on my merry way, paying no attention to the lineage of the horses I was riding. Someone offered me a ride, I graciously agreed and focused on the horse I was given, not the ghosts of horses past that all came together at a certain time and place in order to make the perfect beast.

But as I grow older (and hopefully, wiser), my goal is to bring up the best equine athletes that I can. It used to be that the horses I adopted, bought or were given told me exactly what they wanted to do in life. I felt my job was to uncover, layer by layer, where their true talent and potential lay and then steer them in that direction, eventually finding them a home that would allow them to succeed in their chosen sport.

That was fun while it lasted, but now it’s clear that, while it’s made me a better and more well-rounded rider, it has done nothing to further my competitive career. There’s an eventer inside me just dying to be let out to gallop on a cross country course, but unless I start choosing horses that show talent in eventing it’s just not going to happen.

So, in order to buckle down and get serious about the sport that I’ve chosen, I think it’s time to take a closer look at pedigrees. In Thoroughbred racing, there is a lot of importance placed on the horse’s lineage, and horses are bred with an expectation of success based on their ancestors’ past performances.

Sometimes this pans out and sometimes it doesn’t; but it makes a lot of sense to me why they would care so much about names on a piece of paper. Why would you breed two horses that never won a race in their lives, never showed much talent for galloping, and would rather sunbathe in their pasture than break from the starting gate, with an expectation what their offspring would be the best racehorse you’ve ever seen? Most sane people probably wouldn’t make that assumption. And in an industry based on beating the odds, there needs to be something to back up your crazy assumption.

When taking a horse off the track in order to retrain it for a specific discipline, such as what is asked of trainers in the Thoroughbred Makeover, it’s also a game making educated guesses in an attempt to beat the odds. (This isn’t to say that quality training isn’t important because, after all, that’s what we are all here to do. This is solely speaking to the assumptions made when choosing a horse.)

Yes, it’s important to examine the horse’s conformation, to watch the way the horse moves and to try to understand its personality, but in order to give yourself and your horse the best odds of being competitive in a specific sport, why not go further and try to understand the horse’s lineage while you’re at it? 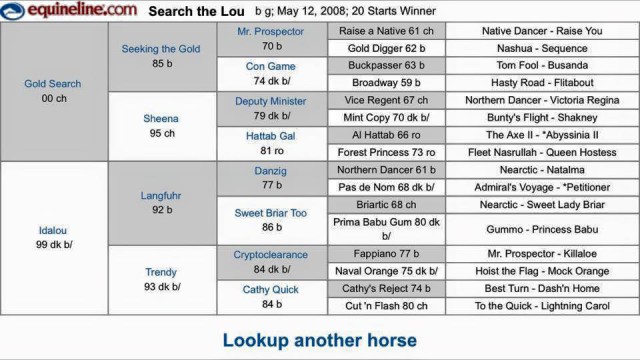 The pedigree of my current OTTB eventer, Search The Lou. Screenshot via Equiline.com.

For example, since my goal is to compete in the eventing portion of the Makeover, I want to find a horse whose pedigree is riddled with successful distance horses. I’m looking for a horse that will be eager to gallop miles around a cross country course instead of sprinting 5 1/2 furlongs and calling it quits.

I’ll also be looking for horses known to produce athletic offspring that hold up and don’t break down very easily, as eventing is physically and mentally demanding sport. And, just for fun, I’ll be doing my research on what the siblings of whatever horse I choose are doing, if they’re successful racehorses, if they’re living out their days broken down in a field, or if maybe, just maybe, they have shown an aptitude for eventing.

But for now, I’ll research my little heart out and hope that my educated guesses pan out.