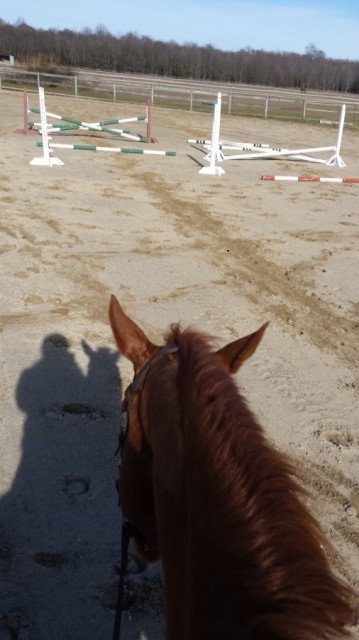 Coaching myself. Not always a great idea! Photo by Holly Covey

I have about as much skill on a horse as the pinky fingernail of Phillip Dutton. But that doesn’t mean I can’t channel him once in a while and today I think I made progress. I coached myself through a problem.

I’ve got a bucky one. He gets away with it because I am afraid there might be painful consequences if I make an issue of it. Every flat school, the first time I ask for a canter, he will often tighten his back and give a lofty hind end buck, or two, just to check and make sure I really meant it. It’s annoying. It’s gotten into my head. I trot forever telling myself it’s ok, as soon as he’s got the edge off, he won’t buck when he canters for the first time. I just have to trot more. It doesn’t work. He bucks anyway.

But it was time to coach myself. It was raining a cold rain, and I was hungry, I’d been outside a long time getting wet, and annoyed with myself for being chicken. I need to find a way to canter without getting that bucking, I thought. What can I do? What would Phillip do?

Today, I thought, when Lucky bucks and lazes away like that, Phillip wouldn’t allow that. I’ve watched enough of his clinics and riding to know that he wouldn’t get mad, but he’d be firm and clear that the canter aid meant canter, not buck, that the leg meant forward, not kick out, that the work would get very hard if there were attitude shown about this pretty basic command. Then he would give the horse a chance to respond correctly, praise him, reinforce it, and go on.

I sat back down, put both legs on, sent him forward, then insisted on working trot and asked again. When we got a little attitude I did shoulder in across the circle, bent him right and left, and asked again as clearly as I could. This time I got a good working canter, a little mouth chewing and ear pinning, but it worked.

When I felt the back get tense and a buck about to happen, I put the leg on and yielded across the field about an acre or two and then did it the other way. Oh you want to loft that hind end? How about  moving it left and right instead? For about 15 minutes? Ah ha!

Having eyes on the ground is a luxury for so many of us, and I know it’s a really important part of riding well. But sometimes it’s a thing I have to do as the rider at the moment in the saddle of the horse who has been allowed to dictate the exercise. There’s an urgency to feel, and then fix, right now, right here.

I have been slacking on insisting on acceptable behavior from this horse. I know why. I don’t want to get tossed. I’ve seen this horse buck on his own. If he took a notion to do one of his half-best while I’m in the saddle, I think it would probably hurt for a while once I came to (sample here). Perfect example of talking myself into a course of inaction and thinking it would work. But it never really does. You’re kicking that can down the road, and it truly does mean that every ride, every half halt and transition, you are reinforcing the training – good and bad. Every ride.

So, today, in the damp, cold rain alone with him in my field, I coached myself through the disobedience. “I don’t want to fall off but I don’t want to be afraid of this either every time I sit on Your Highnesses’ hiney. So there’s the deal. You buck – you work. You show attitude – you get the pinky fingernail of Phillip.”

I put my legs on, I reminded myself to be fair, but I stayed on through a couple of pretty good sunfishes and then sent him forward. He ducked his head. I pulled it up. He pretzeled sideways. I straightened him and sent him forward again – and again. Mommy’s a BITCH! Whine! Of course, it worked – duh. He gave up and softened, and while he was a little wary, he ended well.

I was ridiculously relieved. I had stayed on. It was like winning, but not like I won a fight, but like you got a 9 on a trot extension or jumped a clean stadium. The high of satisfaction that I’d made a decision and it was the right one for a change. I went for walk and gave him lots of praise, then tried once last set of canter transitions before ending for the day, and he was behaved and contrite. He politely asked for his treat when I got off in the barn. I call that progress. But it started with me!