EN reader Cassidy Reese lost her beloved horse Teddy a few weeks ago.  Balladeer Ted completed Rolex and Fair Hill in 2005 with Peter Gray, and many European events with Irish rider Allen McSweeny before becoming a wonderful teacher and partner with Cassidy.  Many thanks to Cassidy for sharing Ted’s story, and thank you for reading. 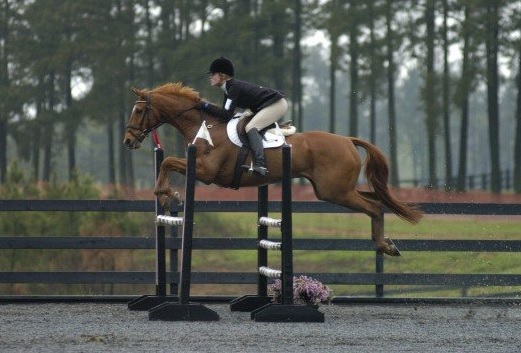 Cassidy and Ted at The Fork. Photo courtesy of Pics of You.

For many years, I’ve made the trip to Kentucky to watch in awe as the amazing, powerful, fragile, four-legged creatures galloped across the bluegrass.  That last weekend of April brings memories of the greats who have come through those finish flags… Courageous Comet, Molokai, Biko, Theodore O’Connor, Custom Made, and the list goes on… But each year many accomplished, lesser known horses gallop through those lanes and achieve what so many of us can only dream about – jumping the final fence and completing the Rolex Kentucky Three Day Event.

If only I’d have known what the future held, I would have looked a little closer for a big white star and glistening copper coat to come galloping by while I was attending the event in 2005 (the last year of the full format at Kentucky).  A year and a half later I found myself in the right working student position at the right time, and was handed the reins for the ride on Balladeer Ted…that beautiful chestnut with the big star, floppy ears, and droopy lower lip.

At that point, it was determined that Ted would no longer make a potential team horse for Canada, but he did have a lot to offer me in education at the upper levels (as long as I could manage his soundness).  I was in complete awe as Rebecca Howard handed over his passport.  Stamps from Blenheim, Bramham, Rolex, Fairhill, and countless other events filled the pages.  He was also the recipient of the Zeppa International Trophy at Rolex (which is always cool to see in the Rolex program every year).   I was sure that this horse had forgotten more than I will ever know, and then he promptly dumped me over a beginner novice log during our first jump school.  Like so many upper level guys, his list of quirks was longer than his list of events in his passport, and one of them was that you could not stop riding… ever.

For two seasons, he held my hand as I made some mistakes and learned from his vast knowledge.  At the Fork, he taught me that I really needed to make a decision about which side of the tree we’d be going after the bounce bank; at Paradise he informed me that we had two different ideas about what a coffin canter was; and  in Ocala he let me feel what a real gallop felt like.  I’d had one upper level horse before him, who was also awesome in his own right, but Ted knew exactly what I did and didn’t know, and he would fill in the gaps with only a slight eye roll in my direction.

Ted was a talker, and a very effective communicator to those who would listen.  After a big move in my life where Ted was out of the competition program for a couple months, he told me in his own way that he was ready to retire.  Once that decision was made in 2008, I only sat on him a handful of times.  I think he felt a certain level of pressure from me, and the stress of knowing he couldn’t perform physically would bother him.  Instead of me, it was my non-horsey husband who took the reins, and Ted taught him to post the trot, how to ride a buck in the canter, and would politely yet firmly inform all of us when a ride was finished. 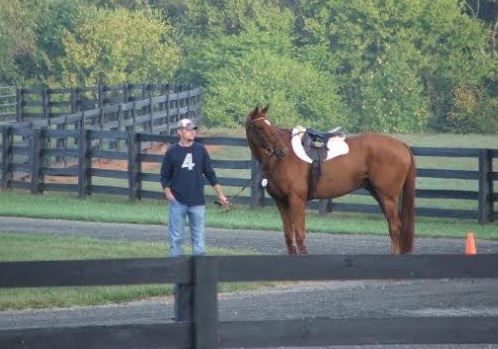 A few years ago, Ted’s health started to deteriorate.  A lifetime of strenuous activity had taken its toll on his body, and I had begun to prepare myself for the day that I’d have to say goodbye.  He would have a bit of a bad spell, but would bounce back, just as strong as ever.  He was our celebrity around the barn, as none of the other horses had achieved even half of what he had in his lifetime and we all cherished every moment that was given to us.

This is exactly what I whispered to him as we walked through his painful spell of colic a few weeks ago.  I told him that he’d done things and seen things that very few horses ever get to, and for that reason and so many more, he would always have a special place in my heart.  I wanted to think that this bad spell was one he’d bounce back from, but a few days later, it was apparent that this time it was different.  Surrounded by a group of people who loved and respected him so much, Ted crossed the rainbow bridge to gallop without pain.

Ted is one of the hundreds of horses who have not only conquered the upper levels, but gone on to pass their knowledge to younger riders.  I feel honored to have learned the things that his previous riders instilled in him, and hope I do him justice by passing along that knowledge to my horses and students. 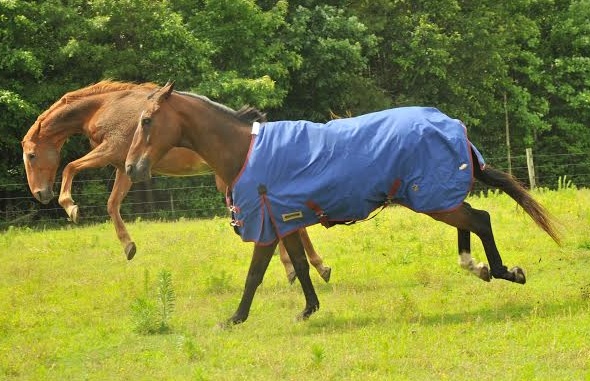 Ted kicking up his heels in retirement Spring 2013. Photo by Kimberly Kulers.