For the past 40 days over at EN’s Blogger’s Row we’ve been following the adventures of Julie Maner, mom to Prelim eventer Emily who decided to attempt an event herself riding Emily’s old horse Romeo. The goal: Jump Start H.T. in Lexington, Kentucky. After trials and tribulations, she made it to the event — and it’s time for one final reflection. If you’re just tuning in, catch up on previous posts from Julie’s blog here. 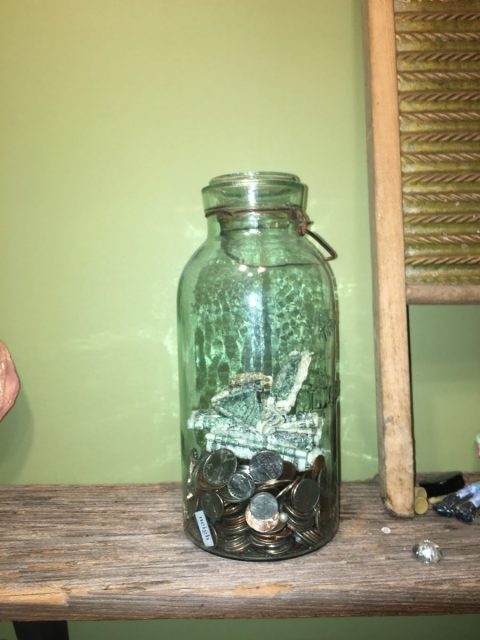 So here I am sipping on a glass of wine (I may have abandoned my no more drinking rule for a few days. Don’t judge me!), listening to Chris Stapleton, in Portland, Maine, soaking it all in. We brought my son, Josh, a U-Haul full of his furniture and personal belongings to Portland. It is here that he has chosen to chase a dream and find himself … for a bit. He and Richard are busy hanging shelves, tacking up lights, putting pictures on the walls and keeping Lowe’s in business.

When I was Josh’s age, finding my passion or doing what speaks to me was not “a thing.” I was busy trying to have it all: a successful relationship, kids, career, mortgage, a white picket fence … you get the picture.  Doing something that just felt good and filled my heart with joy wasn’t something I really thought about but here I am — better late than never. I’m not saying I am going to become a hardcore eventer. Romeo’s days are numbered and honestly, I got lucky a few times at Jump Start.

I digress … So those who know me know that I can be pretty frugal. Although 3 of my 4 children are off of our payroll, spending money on myself (other than the occasional mani/pedi) is few and far between. For me to pay a trainer, keep an older horse moving, and pay all that goes with eventing is out of my allotted weekly budget. I wasn’t comfortable spending “our” money on me chasing a bucket list item; but there was my laundered stripper money tucked away in a special hiding place.

Don’t get excited! The money isn’t really laundered … well sort of and I was never a stripper. Years ago, when the three older kids were middle school age, I would get so frustrated with finding money in the washer and dryer. “Don’t ya’ll care that you’re missing $5” or “this change adds up!” My sometimes absent-minded husband, left a trail of dollar bills as well. After what I’m sure was years of bitching and moaning, I declared all laundered money to be mine. If I am going to wash it, and you don’t care about losing it, it will become mine.

For years I have had a mason jar on a shelf above the washer and dryer.  If it was a penny or the very rare Andrew Jackson (thanks, Richard) and I laundered it, it went into the jar and became mine.  Over time, I accumulated quite the stash. As the change would overflow the jar, I would sit in front of the television and roll it. Pennies became dollars. The crisp Bounce fragranced dollars grew. It even got to be substantial enough for me to feel obligated to tell Sarah (our oldest) about it so that it anything ever happened to me … just in case.

What should I spend it on? It was beginning to burn a hole in my pocket. Should I get a little something-something done to get rid of these wrinkles? A cool piece of art? Something for the house? No, that’s not for me. It’s gotta be for me. And so there it was … that halter … taunting me. Do an event! Do an event! Romeo is home! Do an event! Money could not be an excuse. It would not affect my household budget. I had my laundered stripper dollars … there was no excuse.

I had mentioned my laundered stripper money for years to Erika. She knew about my stash but didn’t fully appreciate it until I actually pulled the trigger and started riding with her. After at least the first 4 or 5 lessons, I would pull out my crisp, fresh and clean stack of ones.  I would count them off; one, two, three, four. “You weren’t kidding!” she said after the first few lessons. Just for giggles, if I laundered someone’s cash over the past month, I would text her just to say, “I made enough for another lesson!”

So in the line of thank yous, I should first thank my kids for being kiddos and not keeping up with their change.  To my adult children for understanding when I said, “the next month and a half is for me. Don’t ask.” For understanding if I had to cancel plans on short notice.  For loving me enough to not only understand but to be happy for me. And to Josh, for reminding me of the importance of inner happiness. For showing me how to take pause and enjoy the ride…not just the conclusion.

And Emily, for whom I know this wasn’t easy. Sitting on the sidelines, watching me ride in your saddle, use your CCI1* never-been-used dressage saddle pad, and neatly hung show clothes.  When corrected by a judge for standing too close to cross country jump #12 (the scary one), you declared, “But that’s my mom!” so the judge let you stay and cheer me over! Thanks for letting me into your world. It has been an honor and privilege to be your eventing mom. 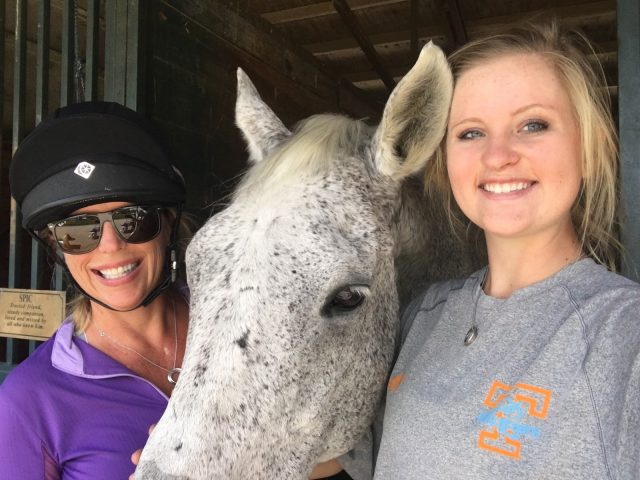 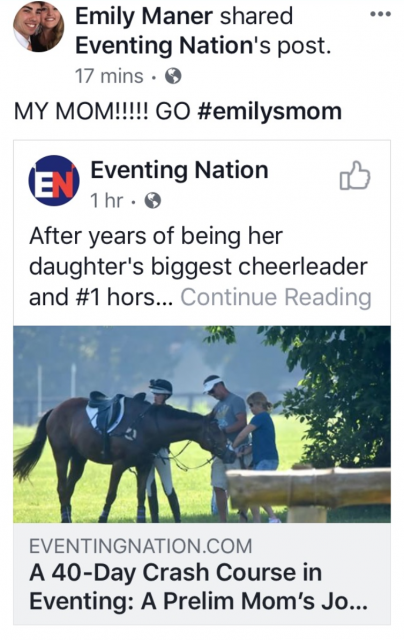