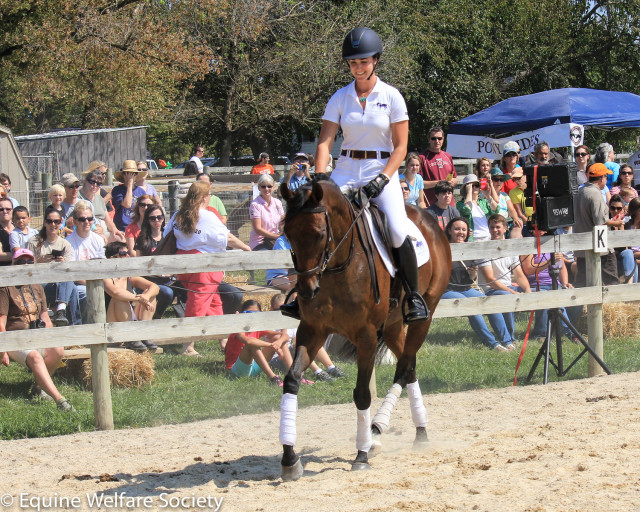 Polly showing off in front of the crowd. Photo courtesy of Equine Welfare Society.

I’ve never been somebody who measured success or progress in terms of days, because especially with horses, you’re in it for the long haul, no matter what. With starting young horses, it is common to give them X number of days under tack, but that sort of training is pretty loosely defined, and the horse is generally considered very green with anything less than a year of work under its belt.

However, while everyone else was away at Plantation, I was participating in my very own competition, which, believe it or not, involved a freestyle to Taylor Swift’s “Shake It Off.” Before you laugh at my music choice, you should know that it was a perfect choice, and you can see proof in the video below. I was competing in the Days End Horse Farm Rescue Sixty Day Trainer’s Challenge, in Woodbine, Md.

In conjunction with my work as head trainer at the Equine Welfare Society here in Keswick, Va., I took on the challenge this summer of having 60 days to turn a horse from nothing into something. We specialize in taking rescue horses and training them to become proper lower level sport horses, and we were excited to work with DEHFR. 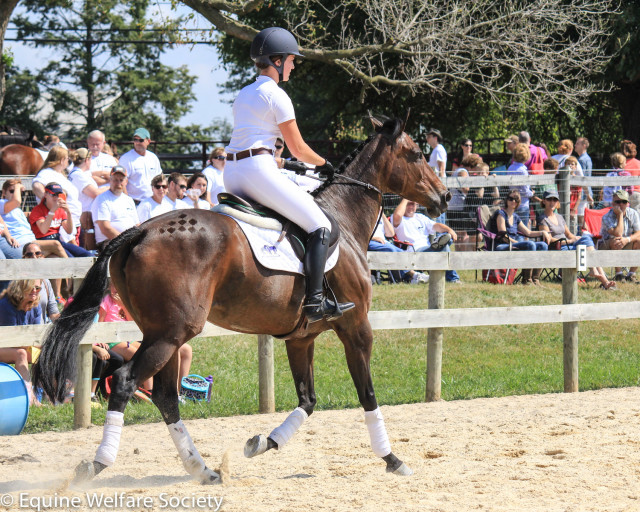 Sporting some amazing turnout, and no bridle! Photo courtesy of Equine Welfare Society.

The journey began in July, when we picked up the 10-year-old thoroughbred mare that I was assigned; her name was Polly. She had only been rescued in April, and she was still underweight. She had confidence issues, and was pretty nervous under tack. All we know of her history is that she raced once as a 5-year-old and finished dead last. After riding her for the past two months, I can say that I doubt she had any training outside of that at any point.

In the world of sport horses, we forget how very physically taxing many of the most basic tasks can be for our horses. Not many of us get on a horse that has been lying fallow for five years, and if you did, you would know that just walking up or down a slight hill can be exhausting and difficult to coordinate.

Polly started with so little base fitness or muscular strength that every session together had to be limited strictly to five to 10 minutes for the first month, or she became tired and distressed. Most horses, even if ridden lightly just a few days a week, have a certain level of strength that allows them to confidently walk, trot and canter in a basic way. However, by the time Polly was warmed up, she was pretty much toasted physically, and so I had to be very careful of how I spent our time. 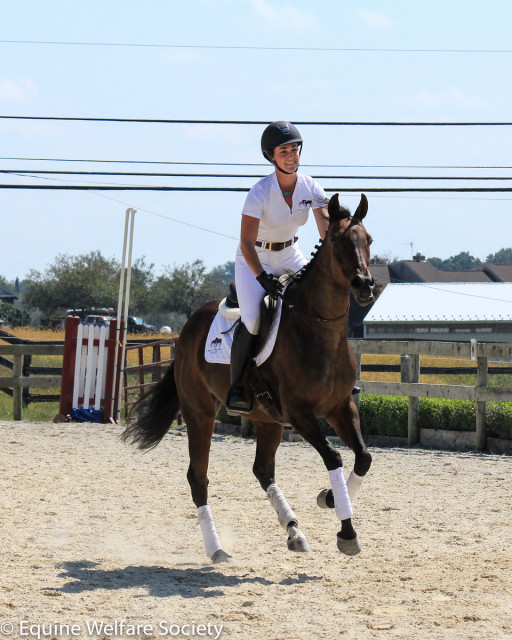 So pleased with herself! Photo courtesy of Equine Welfare Society.

Not to mention the mental challenges of only having two months to get acquainted and accomplish something. Polly had 10 years of experience that told her that people were not exactly her friends, and here I was, a brand new person saying, “Hi, I’m Kate, trust me and work with me and learn from me. Now would be best.” She certainly had some reservations, but to her credit, she tried to be good and do what was expected, and she learned quite quickly for a horse with little to no training at all.

The culmination of our efforts was this Saturday, and while I realized it was a showcase for the horses to encourage adoption, I couldn’t deny that I was feeling very competitive. We had to complete a freestyle that included a figure eight, a square halt and rein back, a turn on the forehand, and a simple change of canter leads.

After that, we had a second class that consisted of trail obstacles, such as walking over a bridge with a smoke machine, stepping through a baby pool, walking under a row of hanging floating pool noodles while walking over a tarp, backing through a zig-zag pattern of straw bales, spraying a target with a water gun, and completing a turn on the forehand inside a hula hoop. It was a big ask for a horse with only 60 days!

I was determined to win best turned out, even if it wasn’t a division. I’m always of the opinion that you can get a lot further in life if you dress the part and put your best foot forward. So, we braided mane and tail (after dying them both the week earlier to get rid of sun streaks!), put in some nice quarter marks and groomed her within an inch of her life. You could barely recognize her from the scraggly mare I picked up two months ago! I was very proud of how her body had changed from just a little work and a lot of elbow grease. 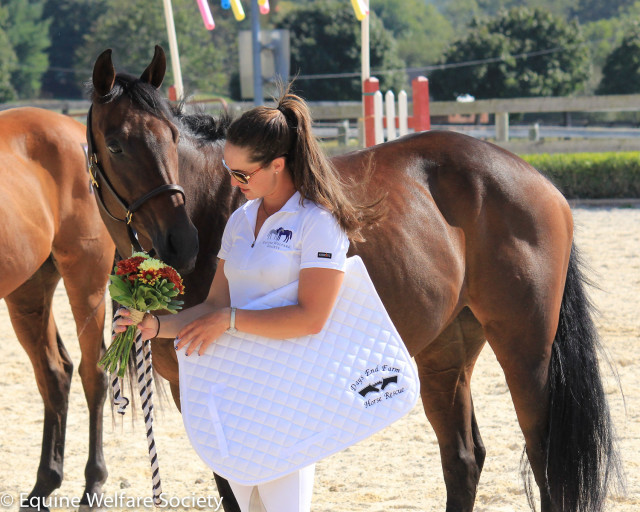 Checking out her prizes. Photo courtesy of Equine Welfare Society.

The crowd of people was big, the atmosphere was electric, and there was a live band as well as a speaker system near the arena. Polly had never seen anything like it, and I think she might have had a flashback to her racing days, but she did an admirable job of staying with me during the freestyle.

I went for making an impression and took her bridle off midway through to canter around and pop over a cross rail. I didn’t expect the crowd to cheer and clap, causing her to go a little faster than I wanted, but it’s best to just pretend like it was your plan all along, after all, she would stop eventually!

The obstacle course was a little too much to ask of her, as I think she was both physically and mentally tired at that point. In retrospect, I should have just gotten off her and walked her through the questions by hand. We did some of the obstacles, but when she becomes nervous, she can’t slow her body, she has to move move move, and halting to use a squirt gun was out of the question, as were some of the other more patient activities. She is a tarp and pool noodle champion, however, if that ever comes up in her lifetime.

If there was ever a time that your patience was tested with a horse, you should enter a timed training challenge: It will show you ultimate patience. Yes, the purpose was to accomplish the most in the short amount of time, but there is nothing like a time constraint to teach you that faster is not always the quickest route to success. DEHFR is always looking for more trainers to participate and give rescue horses a second chance, and it’s a very worthy cause.

The best news of all is that Polly passed a full vetting last week, which means she can enter my training program at the Equine Welfare Society for the winter, which I believe will benefit her greatly. We have four other projects, all ready to go into various sport horse disciplines, and I’m excited to integrate her into the herd.