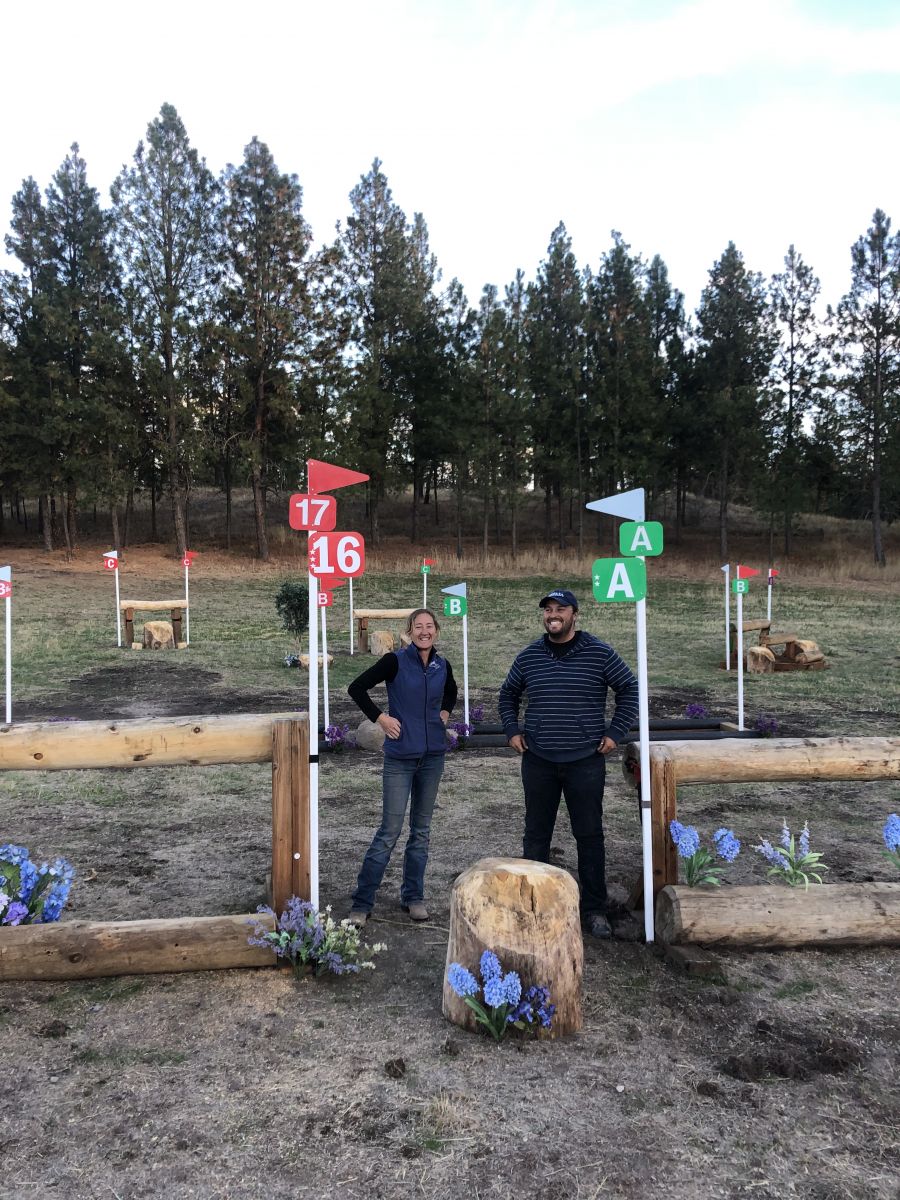 I recently had the opportunity to sit down for a conversation with FEI course designer, Adri Doyal. Our conversation took place at the end of long, successful weekend at Spokane Sport Horse Farm Fall Horse Trials in Spokane, WA. Adri, who was born and raised in East Texas, has been building and designing courses since she was a teenager. She added the venue at Spokane Sport Horse Farm to her roster earlier this year and spent many long hours designing and preparing the debut CCI2*-Short and CCI3*-Short cross courses, as well as designing new fences and tracks for the Intro – Intermediate courses.

Female course designers are few and far between, which makes it that much more important to hear their stories, promote their successes, and encourage other young women to consider a path in course design. I began by asking Adri to share her origin story, as her puppy Tallulah played nearby. 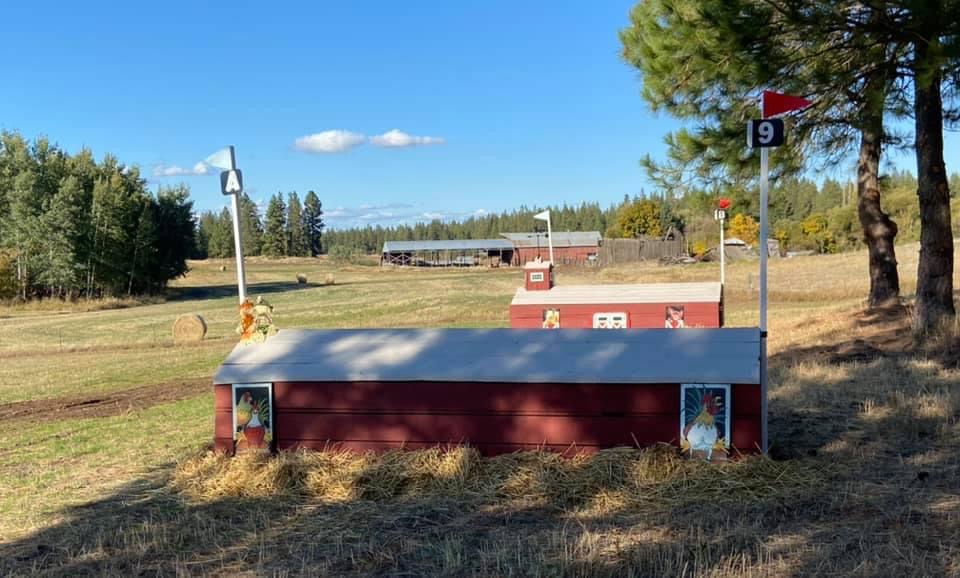 EN: How did you get started in course design?

A.D.: Well you could say I am a legacy case. I was counting it up one time and I think the least amount of horse trials I’ve ever been to in one year is eight, in my entire life… and that would be considered my break from eventing. My mom was the trifecta – she was a judge, course designer, and T.D., and my dad was a course builder and then designer. I took over the chainsaw from him and started a lot more on the course prepping end of things. Especially because I hit a rough patch on horses and I wasn’t sure I wanted to pursue the pro rider thing. And once you start working horse trials you fall into a rhythm with it and… you either stick with it or not!

I started with course prepping and doing little bits of building here and there, and then figured out that I was a lot more passionate about all the fun of the course design and that side of it than I ever was about competitive riding. For me the horses were always more of the hobby… I could go out and play with a baby horse for three hours in a round pen and I was happy. I didn’t really care if I came home with blue ribbons, but I could just devour books upon books on building and design and why we do things that make horses do certain things over jumps. To this day I am still a huge nerd! So I stepped into that role and took over a few events on the prep end, and then I slowly started poaching all of my mom’s course design jobs, and doing more and more with that.

I did a couple of the educational seminars here in the U.S. back when I was in my late teens and early 20s. Around that same time we had a lot of involvement with the Mexican Cavalry and the federation down there – I have my dual citizenship because when I did occasionally compete, I was riding for Mexico. One of the colonels and other military members who were really involved with the federation down there invited me to an FEI seminar. I never really attended with any thought that I would walk out with an FEI license… but then I did! So that started it off and it’s been a little bit interesting to work with the education system of the FEI and the USEA all at the same time.

I’ve gone through a lot of learning curves, and I definitely started off a lot younger than most people did. That was really beneficial to me on one hand, and probably not so much on the other, but it did give me an opportunity to get mileage – lots and lots of mileage – working small events and really unique situations, to where I could start looking at things from a different perspective and deal with restrictions on resources and things like that. I tend to thrive in those situations more – I don’t really know what to do with unlimited resources! I like any opportunity I have to go out and see how things are done, and FEI has been really great for me in that aspect because I’ve gotten to travel to 14 countries now and stomped around cross country courses. Between workshops and seminars and just knocking on doors and finding opportunities to pay my own travel to be able to go and work somewhere, I’ve tried to do as much of that as I can. 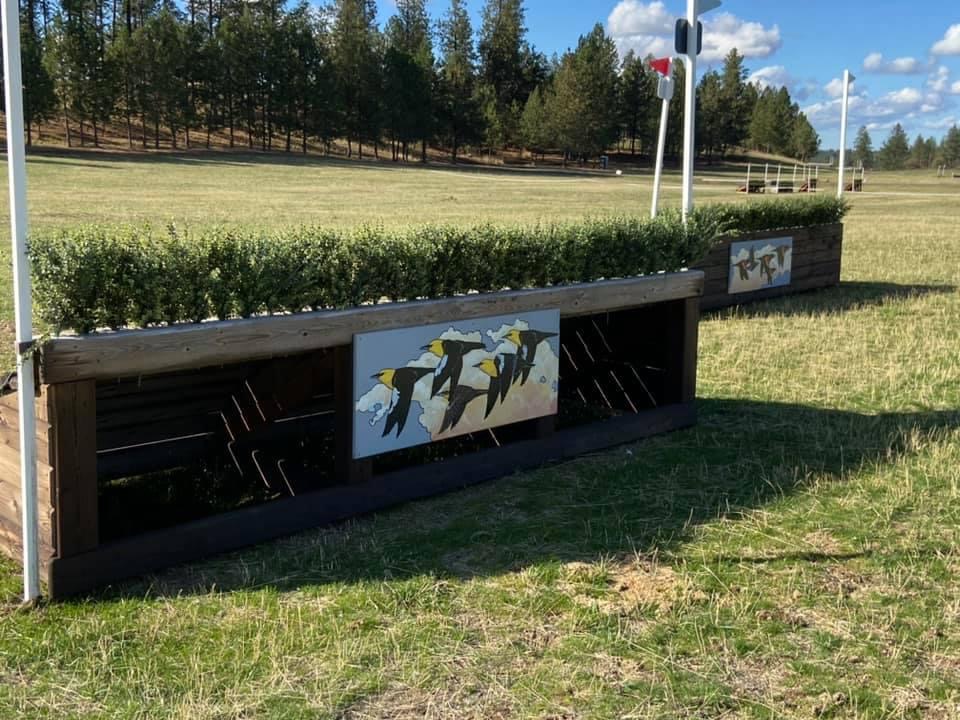 EN: Who are some of your mentors and inspirations, aside from your parents?

A.D.: I’d say one of my biggest mentors for a long time was Tremaine (Cooper). Tremaine was one of my big supporters. He was always a really good voice of reason for me and very encouraging, especially considering my unique step into course design. He was one of the ones that actually got it, that course design was more for me than the riding was. To this day I still love to go school around cross country, but the competing just wasn’t for me.

On the building side of things, I had Dan Stark. Both Dan Stark and John Williams are rock solids that I have known for years, and they’ll always answer a phone call and put up with my questions. Also, Sylvia Roberts has been one of my FEI mentors recently. I’ve gotten to go down and work with her in Australia a couple of times and be with the Adelaide crew, and it was very cool to get the opportunity to work with a female 5* designer and somebody who got it on the same level – you know, understanding that girls want to play with chainsaws too!

EN: If you could give advice to aspiring course designers what would it be?

A.D.: Try to expose yourself to as many influences as you can. And that includes builders as well as designers. Because at least for me, I feel like you need to have an understanding of all of the prep and all of the construction that goes into it to be able to come in and design it. Spend lots of time behind the scenes and do lots of grunt work. I think you’ll notice that different designers all have different styles and we’re all very big personalities. Same thing with builders – the builders have different styles and are all very big personalities. Everybody has an opinion that their way is the right way. It’s the same thing as riding – if you want to be a great rider, expose yourself to riding as many different horses as you can. If you want to be a great designer, go out there and work with as many people as you can. Go as many places as you can. And you start collecting your own little library of tips and tricks, and things that work everywhere. 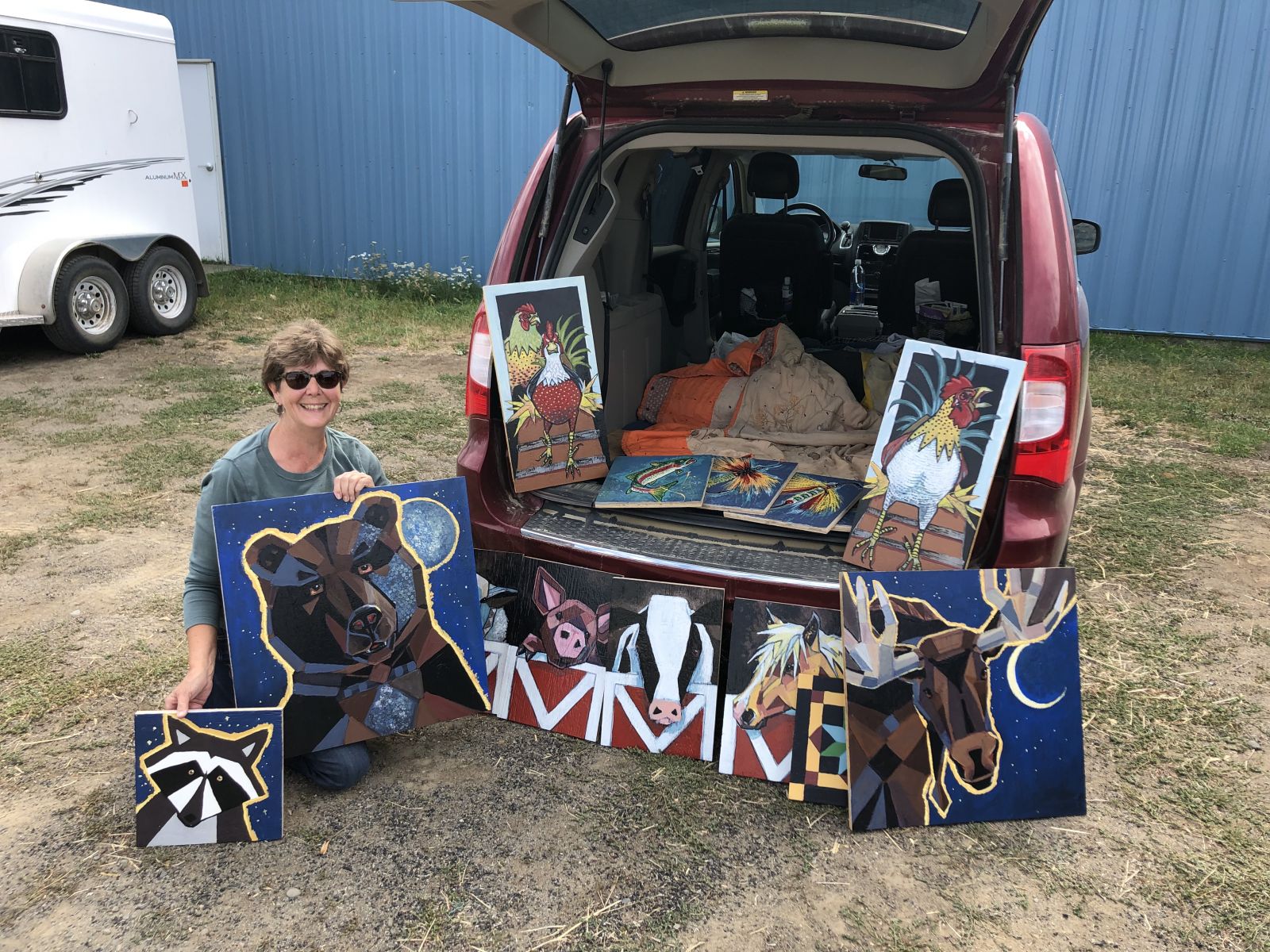 Adri also shared that she loves to scrounge through piles of wood that others might consider scrap – that’s where she finds a lot of treasures to add character and artistic qualities to her jump designs. To her, understanding the building and construction process is equally important to understanding the design. Understanding and using the terrain is also key to good course design.

Ultimately, Adri looks at the big picture: what sort of style and context suits each venue? Cottages appropriate to Badminton don’t belong in the Southwest desert of the U.S. Instead, she designs and builds courses that fit into the surrounding landscape and culture, right down to how the jumps are dressed and accessorized for competition days.

The new courses at Spokane Sport Horse Farm are a beautiful demonstration of this – Adri worked with local artist, Janene Grende, to dress the fences with geometric artwork of wildlife that is native to Eastern Washington State. Although the horses may not notice, the riders certainly appreciate the thought, time, and effort that goes into Adri’s course designs!