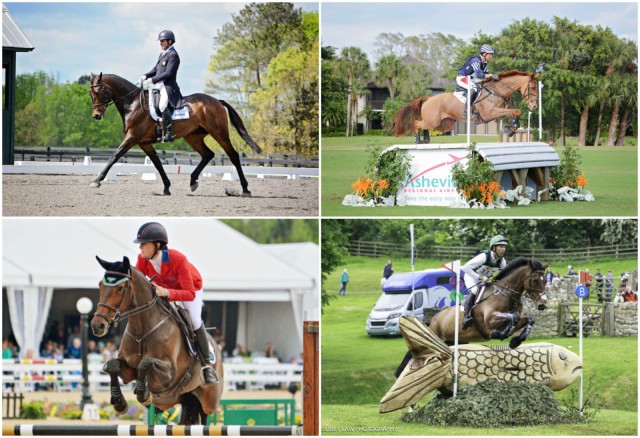 If you take a detailed look at the pedigrees of our U.S. Olympic Eventing Team horses, you’ll not get too far along before finding more Olympic names across all disciplines of equestrian sport. And the team horses — Blackfoot Mystery, Veronica, Fernhill Cubalawn, Loughan Glen and Doesn’t Play Fair — share numerous common relatives. Want to see what I found? Take a look! 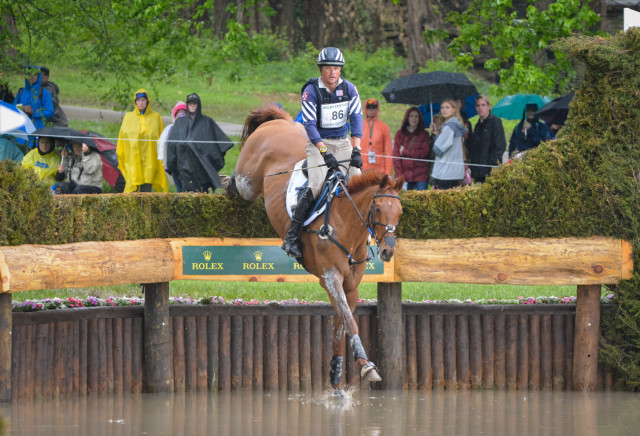 Blackfoot Mystery is a Thoroughbred, bred in Kentucky by Out Of Place, out of the mare True Mystery by Proud Truth, bred by John O’Meara. He had three official starts on the track, all at Hollywood Park in California — finishing sixth, 13th and eighth — before being recycled out of the racehorse track and into the sport horse track.

His sire, Out Of Place, was a fairly good sire in the racing business; he had 85 percent starters and 64 percent winners before his death in 2010 at age 23 while at stud at Claiborne Farm in Kentucky. Out Of Place was a stakes winner (Clark Handicap, Gr.III) and stakes placed (Whitney, Woodward, Iselin, Donn handicaps — all Gr. 1). He sired 39 stakes winners and earners of $31 million; among the best were Free Fighter, sprinter Nightmare Affair, Orville N Wilbur’s and Certain.

So where does Blackfoot Mystery get the jumping blood? Actually, his jumping bloodlines come from all sides of his pedigree. Out Of Place is by the great Cox’s Ridge, out of Arabian Dancer by Damascus. Cox’s Ridge is by Best Turn who is by Turn-To — remember that name because you’re going to hear it again.

Blackfoot Mystery’s dam, True Mystery, is a Maryland-bred workhorse; she won the Virginia Mile and made $143,000, with 13 starts, five wins and four places on the track. True Mystery is by Proud Truth, a stallion that stood in Virginia, and out of a Lord Gaylord mare; Lord Gaylord is by Sir Gaylord, who is by Turn To and out of Somethingroyal, the dam of Secretariat. The tail female line goes to Alibhai, another Thoroughbred jumping sire line. 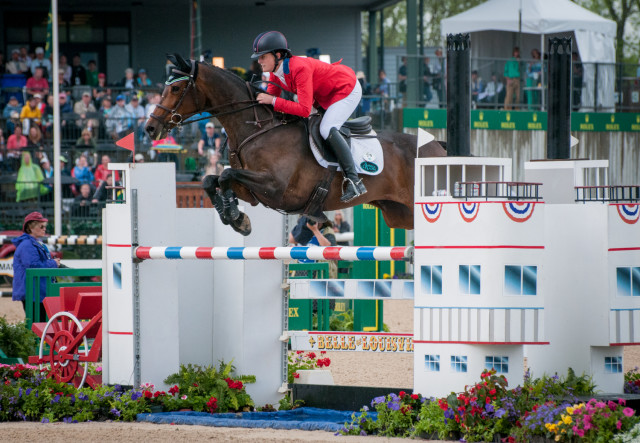 Listed on Sporthorse Data as KWPN (Dutch), Veronica is a bay mare born in the Netherlands in 2002 and bred by Meijel J. Basten, and currently owned by Team Rebecca. Veronica is by the KWPN stallion Pacific out of a KWPN mare Kimbel, by Olympic Ferro by Ulft.

Ferro is now known as Olympic Ferro, having competed in dressage for the Netherlands at the 2000 Olympics in Sydney. He’s the sire of 44 dressage horses, four eventers and 17 show jumpers according to Sporthorse Data, which usually lists horses that have obtained national/international results. But it’s who he’s sired that means something!

Ferro himself won team silver at the 1998 World Equestrian Games, 1999 European Championships and 2000 Olympic Games. In 2000 he placed second in the World Cup finals. But his big claim to fame is as the grandsire of the great Valegro (through Negro) and Uthopia (through Metall), who won team gold for Great Britain in dressage at the 2012 London Olympics. Valegro won individual gold for rider Charlotte Dujardin and Uthopia placed fifth individually with Carl Hester.

Ferro is also the sire of Glock’s Undercover (NED), who won team bronze and placed ninth individually in London. Ulft, Ferro’s sire, was also the damsire of Jerich Parzival (NED) who competed on the same Dutch bronze dressage team and also won individual silver, all at the 2012 London Olympics.

Going back to Veronica’s sire, Pacific is listed as a Holsteiner by Corland, a sire of show hunters and a direct male descendent of the second name we’re going to drop in this Olympic breeding examination: the great jumping sire Cor de la Bryere. Pacific is out of the Nimmerdor mare Joyful Lady.

Veronica was 2014 USEA Mare of the Year, USEF National CCI4* Champion twice at Rolex Kentucky in 2014 and 2016, and has delivered many top placings in Europe: sixth at Blenheim Palace CCI3*, 15th at Aachen CICO3* (helping the U.S. Nations Cup team to third place), and seventh at Bramham CCI3*, In 2016, she hasn’t placed lower than third in her four outings: third at Rocking Horse Open Intermediate, first at Red Hills Advanced, second in The Fork CIC3* and second at Rolex.

KWPN lists Veronica proudly as the second highest ranked Dutch-bred eventer in the world. The Dutch stud refers to her often as “Veronica (Pacific out of Kimbel keur pref prest by Ferro, breeder: J. Basten of Meijel under American Lauren Kieffer.” 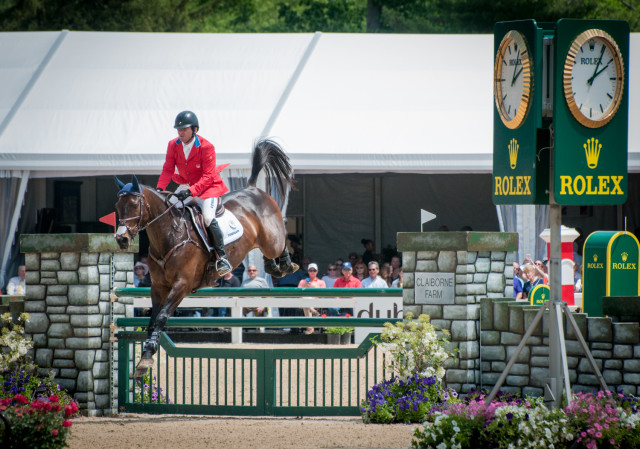 Fernhill Cubalawn is sourced through Carol Gee of Fernhill Sport Horses and is a Holsteiner by Con Capitol out of a Thoroughbred mare.

Con Capitol (listed as Holsteiner) died in 2007. He was German-bred, by the great Olympic sire Contender (Holsteiner), who sired a prolific 127 approved sons and 75 states premium mares before his death in 2014. Contender was by Calypso II, one of the great jumping sons of — yes —  Cor de la Bryere. This is an example of tail male jumping bloodlines at the highest level in the world.

But Fernhill Cubalawn’s jumping lines don’t stop there. Jumping also shows up under his dam, a Thoroughbred mare, listed as Corse Lawn xx by Arkan (GB) by Prince Tenderfoot. Prince Tenderfoot goes back to Princequillo, the most notable name in her pedigree. She is out of a Thoroughbred mare named Jubilee Leigh by Hubble Bubble, listed as an HIS (Horse Sport Ireland) premium stallion.

Hubble Bubble sired horses that also raced over fences in Ireland, and both he and Arkan are listed as archive stallions on the Vauterhill Stud website in Devon, England. Corse Lawn was said to have competed in  dressage and eventing. She’s double bred Nasrullah in the sixth generation.

Additionally, Fernhill Cubalawn’s grandsire, Contender, had a pretty important presence in the 2012 London Olympics. He is the grandsire of Ravel (USA) who finished 17th, and the damsire of Sancette (AUS); both hirses competed in dressage. He is also the sire of Bendigo (AUS) and grandsire of NZB Campino (NZL), who competed in eventing, as well as the grandsire of Codex One (GER) and damsire of Rosalia La Silla (MEX) in show jumping. 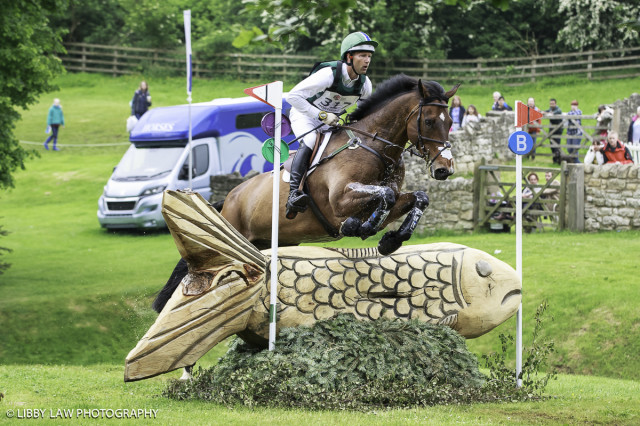 Tattymacall Mustard is listed as being out of an Irish Draught Sport Horse mare Culloville Victoria, by a Thoroughbred Ruffo by Riva Ridge, stablemate of the great Secretariat in the 1970s. Riva Ridge is a grandson of — no kidding, really — Turn-To. Loughan Glen was bred by Daragh Geraghty, Co. Galway. The bottom side past Culloville Victoria is somewhat unknown.

On the topside, the Holsteiner Limmerick is a grandson of the great Landgraf I, a jumping sire produced in Germany with a long list of competitive offspring to his name. And, of course, Cor de la Bryere appears in his pedigree too, through Caletto II, sire of his dam Zierblute.

Limmerick himself was a show jumper and stands in Ireland today. Some of the horses he sired include Shannondale Titan, top 10 at Bramham and 18th at Badminton in 2015 with Bill Levett; Graf Liberty, fourth at Luhmühlen with Chris Burton last year; and Lara’s Song, a British eventing mare who completed Blenheim, Burghley and Luhmühlen with Lisa Keys. 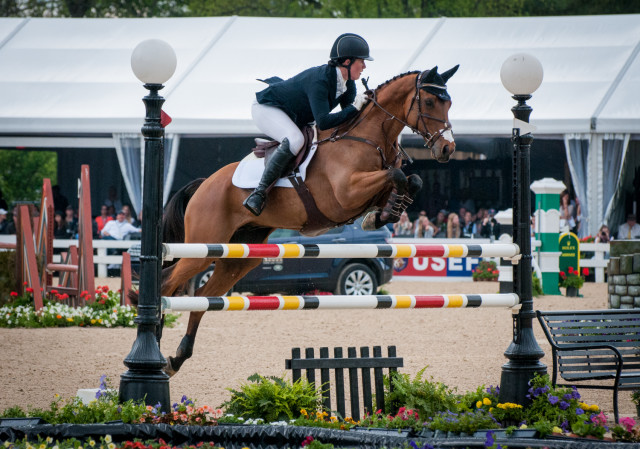 Doesn’t Play Fair was bred in the U.S. by Half Trak Farm in Stanwood, Washington. His sire, Camiros, stood at Fox Fire Farm in Washington state.

In 1994, Camiros was grand champion stallion at the Holsteiner stallion approvals in Neumunster, Germany. He was a premium stallion, given a 9 on brilliance and impulsion. And in his 1995 Medingen stallion testing, his only competition, he received a score of 106.72 on his dressage and 99.35 on his jumping — recipe for eventing greatness if there ever was one.

Camiros is by Contender (see Fernhill Cubalawn above) and out of the dam Valeska IV, a prolific mare who also produced champion stallion Corofino among her 14 foals. Here’s a video of him (and he certainly throws his movement to his offspring).

Doesn’t Play Fair has a half-sibling, Chattington RSF,  who was named USDF Grand Champion as a 3-year-old in 2014, and his full sister, Wiski HTF (video of her here) retained by Half Trak Farm, has been produced through Fourth Level in dressage.

Doesn’t Play Fair is out of Oncoeur by Coriander (Holsteiner), which is tail male to — you guessed it — Cor de la Bryere. Oncoeur is half Thoroughbred, out of I C Food, daughter of Gamble On Me, a granddaughter of Bold Ruler. I C Food was bred to warmbloods and produced two mares. I C Food’s sire Seafood is by Proud Clarion by Hail To Reason by Turn-To. There is also Sailor in her pedigree, a tail male Pilate grandson, a name often found in Thoroughbred jumping pedigrees.

Want to try breeding your own Doesn’t Play Fair? His dam, Oncoeur, is currently listed for sale on Sport Horse Nation, and she’s in foal to Mighty Magic. Click here to check out her sales listing.