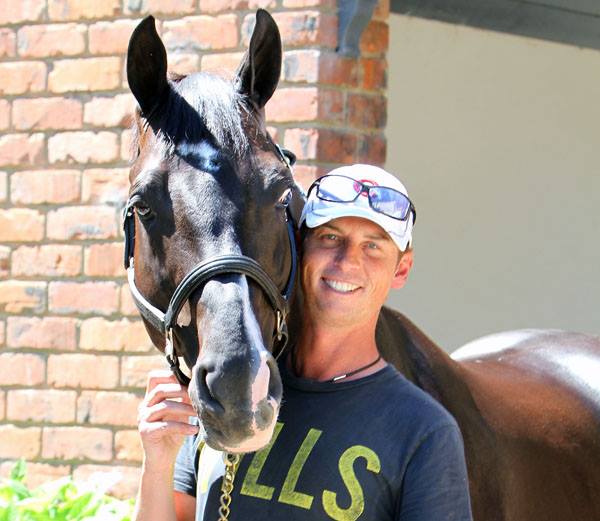 Everyone loves a happy ending and thankfully that’s what Uthopia got, as Carl Hester has been able to bring the Olympic champion home to his yard. Coincidentally, he comes home just in time to celebrate Carl’s birthday, which means Carl gets a very special present this year. Those who helped secure his future apparently wish to remain anonymous, but I think we can all voice a big thank you to whoever the mystery helpers were.

As has been widely reported, the U.S. Eventing Team took NYC by storm yesterday. Or maybe just Riverdale Equestrian Center, in the Bronx. The four members of the team trekked up to the Big Apple on Monday for some prime time coverage, with TIME magazine leading the way. While the reporters maybe weren’t totally up to speed on our jargon, they were unfazed and one even stepped up for a quick riding lesson from Boyd. [U.S. Eventers Expand Audience]

In October, the OTTB will reign supreme. Tickets are on sale for the Retired Racehorse Project’s $100,000 Thoroughbred Makeover and National Symposium Presented by Thoroughbred Charities of America. The event features 500 Thoroughbred ex-racehorses performing in ten equestrian disciplines who have each received less than a year’s training in a second career. Top professional and amateur trainers from throughout North America compete for $100,000 in prize money and crowd support to be crowned “America’s Most Wanted Thoroughbred”. The action takes place October 27-30, 2016 at the Kentucky Horse Park in Lexington. [Tickets Now On Sale]

The University of Findlay has elevated the summer horse camp to a new level. For the months of June and July, UF is hosting numerous camps for middle and high schoolers that offers concentrated instruction in various disciplines. Campers are welcome to bring their own horse or use one of UF’s horses, and campers have come as far as California. It’s a great opportunity for some of these kids to further their education in their own discipline, or to get a taste of a different one. [This Summer Horse Camps are Cool]

Weekly Business Tip from Mythic Landing Enterprises:  While some professionals find social media fun, many others find it overwhelming. If you are in this latter category, try to outsource some of your stress to someone else. This person could be one of your trusted students, a spouse, or a professional such as MLE. You will just want to make sure that you and your helper are on the same page as far as what type of information you want published.

SmartPak Product of the Day: Pyranha has been my go-to fly spray for years, and I’ve always felt that what is in the yellow bottle was the most effective spray on the market. Now Pyranha has gone a step further and created an all new natural fly spray, which probably smells a lot less…distinctive. [SmartPak]

The entries for the second Rebecca Farm CCI3* have been posted and some familiar faces will be trekking out from the East Coast! Check out the contenders from last year