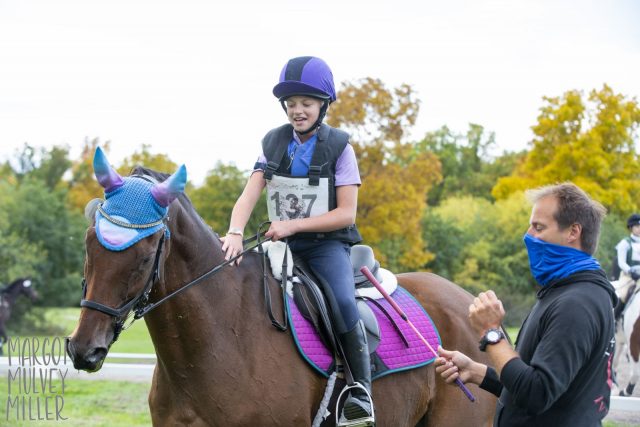 Horses have always been a family affair for Troy, Taylor, and Landon Wing. Living on the farm out of which Troy runs Troy Wing Eventing in upstate New York has plenty of perks paired with an equal amount of responsibility, but it’s a home environment that has brought the family close together alongside some equally special horses.

Time To Tango, an off-track Thoroughbred gelding who is 20 this year, was never the simplest of rides, as most talented event horses go. Troy followed his gut feeling after watching the gelding’s sales ads pop up periodically. Lower and lower, the price would drop, until finally the horse was listed as free. It had been hard to find buyers willing to take a chance on the sensitive horse with the huge jump.

But Troy had a feeling. He sent a trailer for the gelding after a minimal vetting, the horse’s videos enough to make a case to his new rider.

It was tough – certainly many gritty event riders can relate to this process. “Tango” was anxious, high energy, and liked to jump so big that it was difficult for riders to stick in the tack. Yet as Troy put in the time, the gelding slowly gave in. The pair would move up through the Intermediate level, eventually completing a then-CIC2* at Jersey Fresh in 2016. 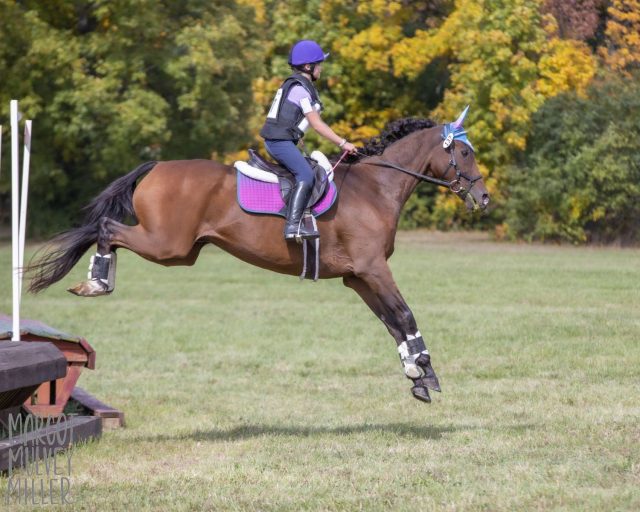 As Tango grew older and his upper level career drew to a close, he began playing the role of teacher – though he wouldn’t have been the easiest professor that all the kids were eager to learn from. Troy would often use Tango for lessons on the farm, but he would test the riders.

Taylor Wing, who is 11 this year, grew up around the big bay gelding. “Baby Tango”, she would call him as she spent time grooming him for her dad at shows and around the farm. Both she and Landon, 15, grew up comfortable around the horses, Landon’s interests eventually leading him more to the pleasure side of riding. Taylor, on the other hand, had a competitive streak with her riding. As her own riding education blossomed, Troy began to entertain the idea of giving the ride on his heart horse to his daughter.

Of course, there was a learning curve. Tango was a big, strong horse, and Taylor’s legs would barely clear the saddle pad in her dressage tack. But she was determined – and Tango, as the smartest horses will do, seemed to know that this small human was one he should be gentler with.

Troy laughs at this now. Of course his horse would put on his angel wings when Taylor was in the saddle. But as soon as Troy would swing a leg over, all bets were off. Yet the gelding was attached to Taylor, always taking small, mincing steps when he’d let her up for a pony ride as a small child.

Taylor had begun competing with another horse, Anime, who is a different style of ride for her. But soon enough, she felt ready to ask the big question: could she compete Tango at an event? 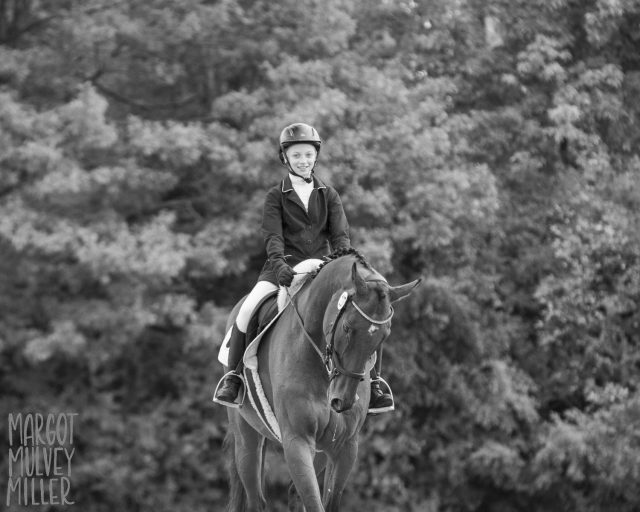 Troy agreed, on the condition that Taylor take responsibility for making sure both of her horses were properly prepared for the upcoming event at Genesee Valley Riding and Driving Club. It was a task she took seriously, making a schedule for each horse in the weeks leading up to the event, dotting her i’s and crossing her t’s. Troy was impressed, and more than a little emotional at the thought of his daughter competing with his partner.

Taylor and Tango would add a few penalties in the show jumping phase at their first competition together, but it was all smiles at the end of the weekend. She would finish in fifth place out of 13 starters with Tango in the Beginner Novice, and also competed in the Novice division with Anime. It’s incredibly special to see your former upper level horse teaching the ropes to someone else. It’s even more meaningful when that someone is your kid.

Troy reflected on his life with his kids, managing his business, competitive career, and home life. It’s not the simplest life for the kids, but he says he’s grateful that they’ve had the opportunity to grow closer and share some incredible memories. “We always knew (Tango) would give his heart over everything,” Troy says. “It’s been really special watching him and Taylor, and I’m just reminded of how lucky I am to have these kids.”

“Throughout the day Taylor stayed humble and grateful, simply excited to have a chance to sit on both horses,” longtime family friend Margot Miller wrote to EN. “She handled Tango’s ‘dressage attitude’ with grace and a smile. “As she was called to the start box, Tay started to cry. Most of the team was out on the course, finding spots for the best photographs and videos, leaving just Troy and Tay in the start box. Troy said ‘Tay, If you are worried and not feeling okay about this, you don’t have to go,’. Taylor responded, “These are happy tears Dad, I never believed I would really get here, I’ve always dreamed of this.”