We’ve been following the story of Andrea Glazer, an eventer among showjumpers at the Maccabiah Games. After helping Team USA find Team silver (see Part II, “Team Silver Is the New Gold“), she had one round left to go to determine individual placings. In her first rounds Andrea was catch riding an unfamiliar horse named Chin Chinello over 1.20-meter, or 3’9″, show jumping courses — an impressive feat! For the final round, the fences were even bigger. Thanks for sharing your story, Andrea! 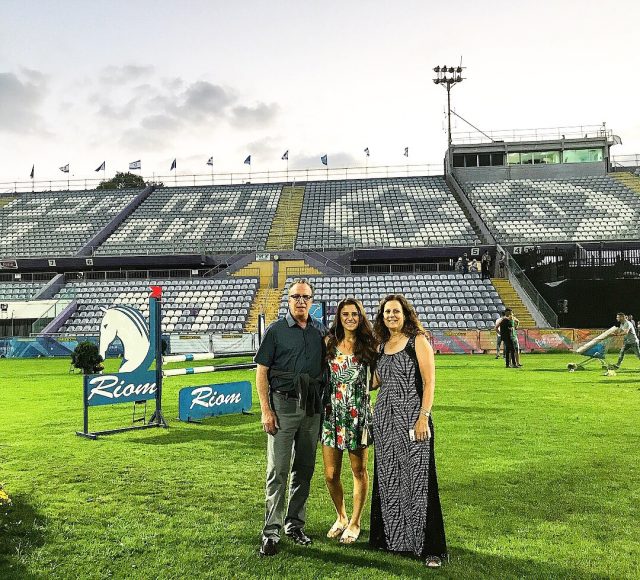 Andrea with her parents at the Games. Photo courtesy of Andrea Glazer.

My grooms, best friends, biggest cheerleaders, and parents, all in one — I could not have done any of this without them. Last night was the last round in the Maccabiah Games, the last time I would wear my pinque coat, ride Chin Chinello, and represent the United States in Teddy Stadium.

I was so excited to go back in the ring one last time … until I saw how big the jumps were. I thought they would be 1.25, which is still gigantic, but they were 1.30, which is bigger than the highest level in eventing! Neither Chin Chinello, nor I, had ever shown that high, so I guess you could say I was nervous.

I don’t think I said a word during the course walk. As we passed jump 6, Kate looked at me and goes, “After this jump, you can pull out, you don’t have to do this.” Kate has only known me for a week so I don’t think she realized how hard I’ve worked and that I definitely am not going to quit the competition early when I have made it this far.

The course was technical and huge. We had a triple bar into a triple combination. I’ve never seen or jumped a line like that. To further explain, it was a very wide jump, three rails in width instead of the normal one or two, then two strides to a tall vertical, to two more strides to another vertical. After the rider, hopefully, jumps through that line, you have to sit up, reorganize, and kick on to get the forward seven strides to a huge oxer. Chin Chinello, being the huge horse that he is, was going to have trouble with this line if I didn’t jump in perfectly. The jumps were two big to screw up — Kate and I both knew that. I have never been so nervous in my entire life. 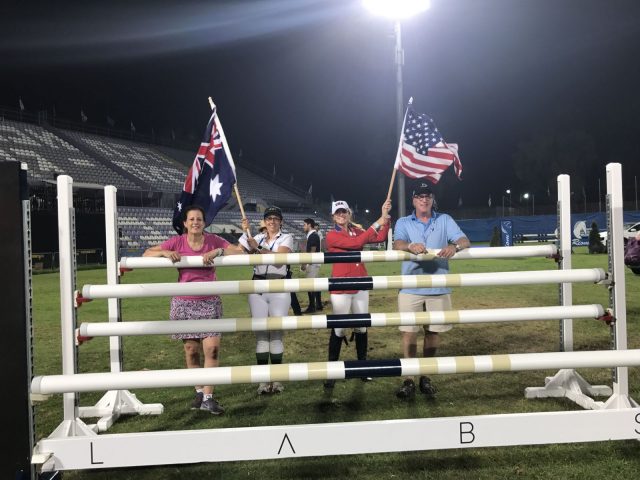 I got into warm-up and immediately felt better. He’s so big, so the jumps looked a little smaller from my “bird’s eye view.” I warmed up, jumped huge jumps (a vertical that was 1.35!!), and went into the stadium that was filled with the biggest crowd yet. I took one huge breath, gave Chin Chinello a pat to calm both of our nerves, and started my course.

The first jump was great, I turned to the second and the cheers from the crowd after I jumped it clean made Chin Chinello buck. I lost my rhythm and knocked #2, kicked him on to leave a stride out to clean the huge oxer with water under it. I jumped 4, 5, and 6 well, barely hitting another one down because he was tired, and then I turned to the huge triple bar combination.

I JUMPED IT PERFECTLY!

I jumped in, sat all the way back to fit in the two strides between both verticals, then kicked on to the huge oxer — it was amazing! I jumped the last five jumps, finished the course, and galloped around the ring patting him and hugging him because I DID IT!

As I galloped out of the ring, I see my mom running from her hiding spot (she’s so weird), tears in her eyes, kissing Chin Chinello, hugging me, until I cried. It was the highlight of my trip. 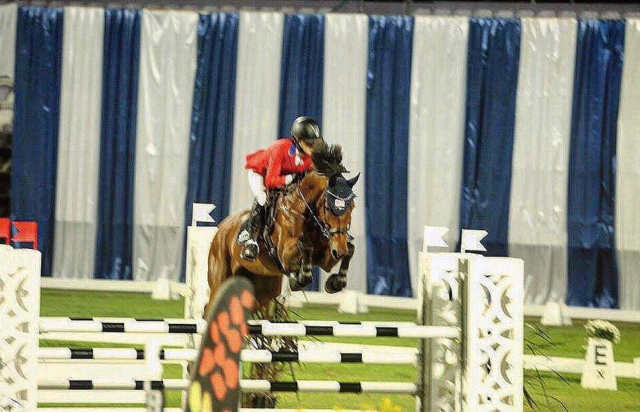 My teammates all put in great rounds. Syd rode her horse, Cheese, perfectly and finished 22nd. Cloe and Haley cleaned up and both were in the top five! I am so sad that the competition is over. It was the best week of my life.

I stay in Israel until the 18th when I leave for Australia. I had to say bye to my amazing parents yesterday, which was really hard since I won’t see them until November. I am counting down the days until they visit! 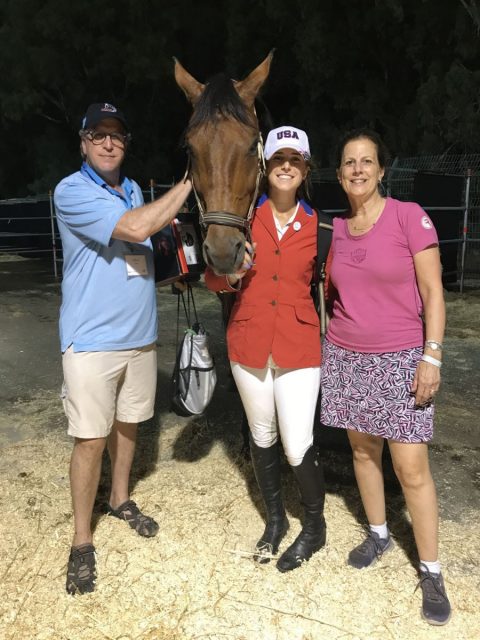 For now, I am just hanging out in Israel and going to watch the other sports who still have games left. Thank you to everyone who cheered me on throughout my preparation and competition. I can’t wait for my next adventure, and will keep blogging until you guys get sick of me!

You can read more on Andrea’s blog here.