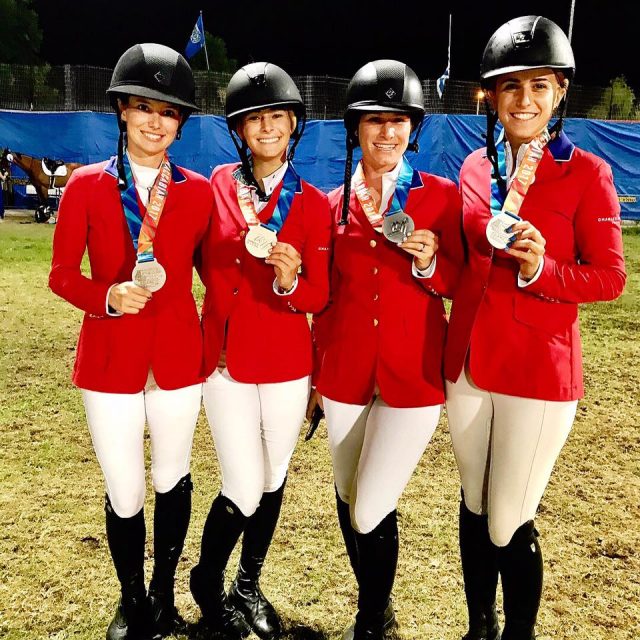 Andrea Glazer, an eventer among showjumpers, helped Team USA find the podium yesterday in Israel at the Maccabiah Games. You can read about round one here; today we catch up with her about the finale of the team competition, after which she’ll have one round left to go to determine individual placings.

Yesterday was was the second day of team competition, which counted towards her individual score as well. Andrea said she got a little nauseous when she saw the course.

“I walked out to the stadium before my coach, Kate (Levy), got there, and immediately felt ill because the jumps were MASSIVE!” she says. “The wall on the course wasn’t big enough, so they even put rails on top of it.” 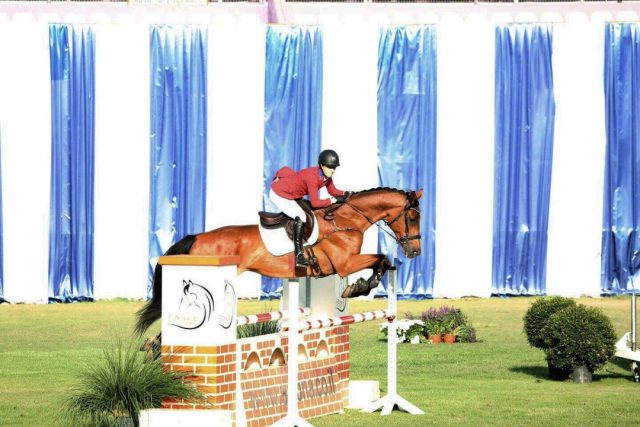 Andrea was the 15th rider to go into the ring, the first for team USA. “I was so nervous I had to call my trainer from home, Julie Richards, to calm me down,” she says. “Thank God I called her, because I think she’s the reason I didn’t get physically ill.”

She was most nervous about jump #3, a big triple bar …

… and the triple combination at #4ABC. “Since Chin Chinello is so big, I didn’t know if I could get him organized after the huge triple bar quickly enough to get him correctly into the combination,” Andrea says. “The coaches, Kate, Angel and Brianne, all talked through my plan with me and as long as I stuck to the plan, I would be OK.”

We’ll let Andrea tell the rest of her story in her own words!

“Of course, the nerves kicked in and in the first round, I wasn’t reactive immediately to the huge jump in and got too close to the first element in the combination and had the rail down. Despite having a few jumps down, I jumped the last jump and through the finish flags with a huge feeling of relief that I completed the biggest course I had ever jumped. 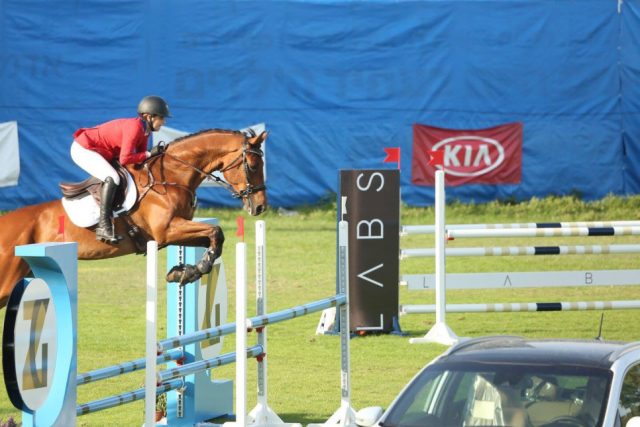 “My teammates are such amazing riders, and it’s such an honor to be on a team with them, cheering them on during their rounds. Syd (Shulman) rode a very difficult horse better than anyone could have, having a few rails that were caused by the horse’s inexperience at the level. Cloe (Hymowitz) and Haley (Schaufeld) both put in beautiful, accurate, and clean rounds to close the gap a little more between the USA and Israel.

“Before I got on for the second round, I called Julie, talked to all the coaches, and Kate and I decided that I should leave a stride out in the line from #3 to #4ABC to give Chin Chinello and I more space before the jump and to also save time. I could sense that Chin Chinello was getting a little tired. My second round was very rhythmical and ridden much more accurately than the first. I completely ‘took a nap,’ as Kate said, to jump #2, but the rest of the course felt great. We had a few down due to my error at #2 and Chin Chinello’s tiredness, but I felt that even though both he and I are very inexperienced at this height, we fit in with the jumpers! 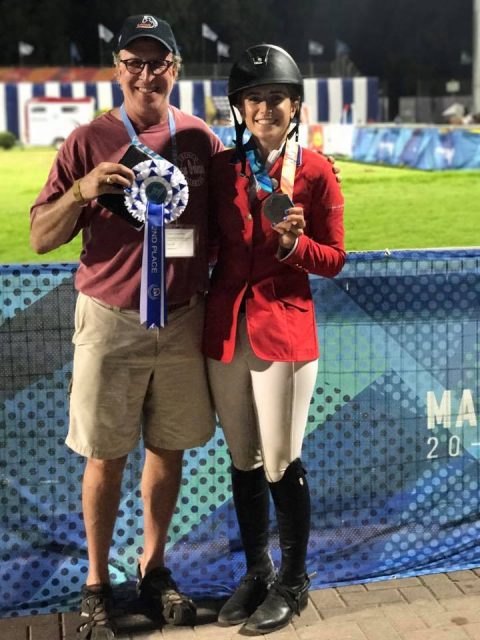 “If you told me last year that I would be walking into Teddy Stadium, in a pink coat, with the best team I could ever ask for, to get a silver medal around my neck, I would laugh right in your face. Why? Because, this time last year, I was riding a horse that shouldn’t jump, ever, and I lost all of my confidence because of it. I would tremble in fear when going up to any size jump, even cross-rails, because he was so unpredictable.

“I thought that I would never get back to being the rider I was before I bought him.

“I spent the past 12 months working on gaining my confidence, and breaking down the psychological fear with jumping; I can proudly say that the hard work has paid off. The emotions I felt walking back into the stadium to receive a silver medal at the Jewish Olympics is a dream that I still am not able to wrap my head around.

“I cannot thank everyone enough for helping me fall back in love with the sport, build my confidence back up, and get me to where I am today (you know who you are) and I can’t wait to put on my pink coat to do one last round tomorrow night to complete the individual portion of the Maccabiah Games.”