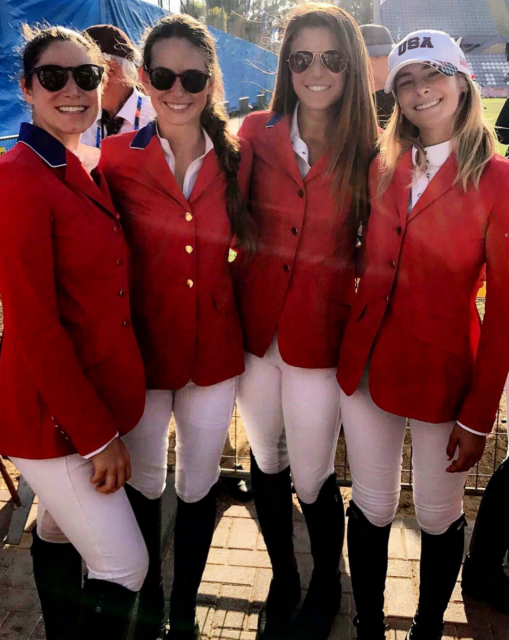 Andrea Glazer usually considers herself an eventer, but this week she’s holding her own in straight show jumping competition at the Maccabiah Games in Israel as part of Team USA.

The Games — think Jewish Olympics — are held every four years, providing Jewish athletes from all over the world the opportunity to share their heritage and customs in competitive athletic settings. The Games commenced in the 1920s at a time when Jewish athletes were frequently excluded from athletic clubs and team participation and have continued for the past 80 years. Now the Games are the third largest multi-sports competition in the world.

After a big year of training, and several days of orientation, touring and team workouts upon arriving in Tel-Aviv at the end of June, the Maccabiah Games kicked off this weekend. 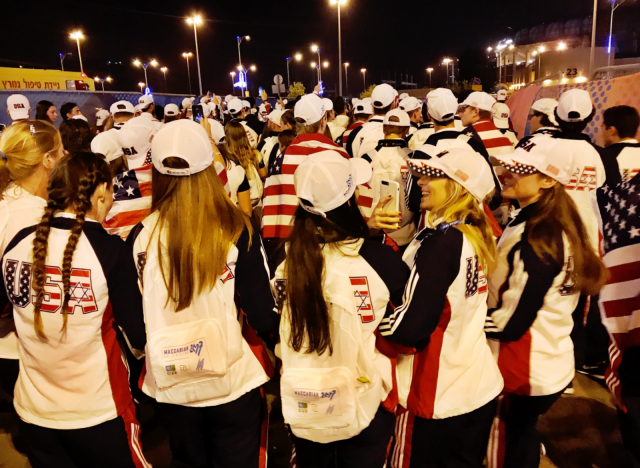 First up was the Opening Ceremonies in Jerusalem, which Andrea calls “the coolest, craziest and most surreal experience of my life.”

After a meet-and-greet with the other countries, the teams ushered to the stadium where they marched out by country in front of a huge crowd. “I have never chanted so loudly, sweated so much, or felt so much pride for my country in my life,” Andrea says. “It was unbelievable.”

“The entire equestrian team walked out on stage in front of the 15,000 spectators, arms linked, chanting USA as loud as we could,” she says. “The spectators were pushing each other to get to the front just to give us all high fives — I felt like a celebrity! I didn’t stop jumping up and down until the security guards came up to us and told us we had to sit down.” 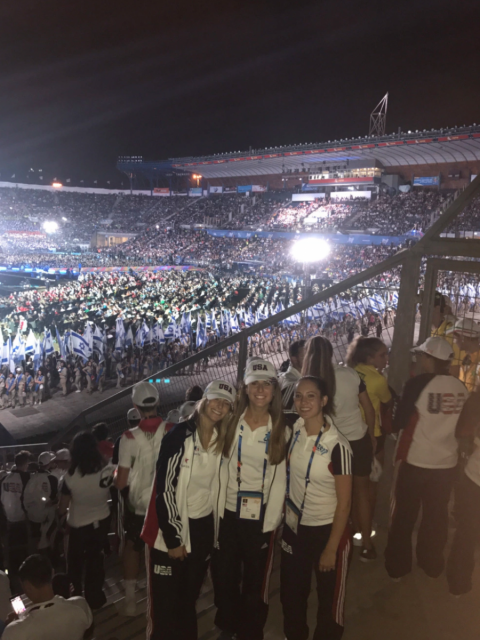 The actual ceremony was an “interesting” cultural experience, she says. “There was a weird wedding, some history lessons, impressive performances, and, to no surprise, more chanting. I don’t think I stopped smiling despite the fact that we hadn’t eaten since 2 p.m. If you know me, you know I am not happy when I am hungry, so that really says a lot to how amazing it was.”

“I cannot put into words what it was like to walk into Teddy Stadium representing my country with the best Jewish athletes in the world; I will say it was the best night of my life. The pride, excitement, and cohesiveness felt marching with my team was overwhelming. I am so lucky to be here and I can’t thank everyone enough for all of the support!”

Luck of the Draw 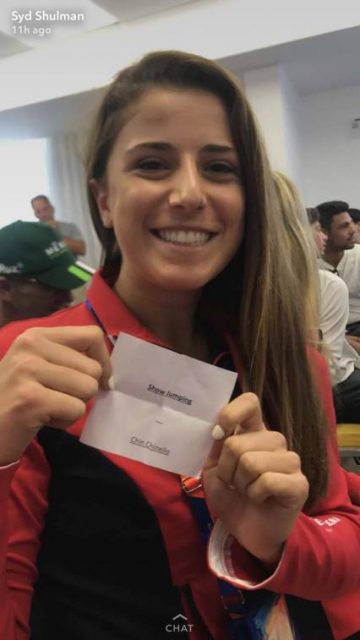 Many of the riders shipped their horses to the Games, including the entire Swiss team which won the bronze and two of Andrea’s Team USA teammates, Harley and Chloe. Andrea, however, was to ride a catch ride horse, and she says she was nerve-wracked heading into the draw.

“I cannot explain the amount of preparation that has gone into the anticipation of what horse I will be riding here,” she says. “I spent my training for the Maccabiah Games riding as many different horses as possible, as much as I could, hoping that my hard-work and skill would allow me to adapt to whatever horse I drew.”

The horse she drew was Chin Chinello, and Andrea got wide-eyed at first impression. He was huge!

“We walked up to his stall and I truly have never ridden a horse that big,” she says. “Standing 17.2 hands, this beautiful bay gelding walked right up to me and started licking me. Despite his size, it was obvious that he was a huge teddy bear.” 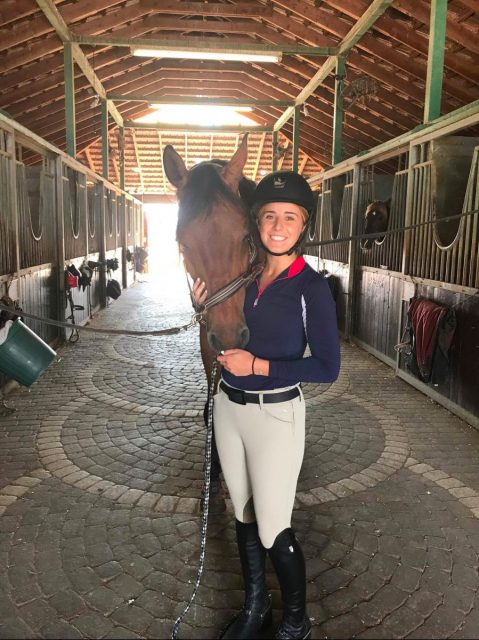 It also became quickly apparently that he was quite the kick ride. “I hopped on him, ready to ride the gigantic horse, and realized that just getting him to walk forward was a struggle. He is the laziest horse, ever. I had the best leg workout of my life just getting him to canter around the ring. I looked at (team coach) Kate Levy thinking, ‘How the heck am I supposed to ride this horse over 1.25m jumps?'”

“Once I started jumping him though, I could tell he loves to jump and is a saint,” she says. “I was not perfect by any means, but I did jump 1.30 courses and had SO much fun. He isn’t the easiest ride, and it was definitely one of the hardest leg workouts of my life, but I am so happy and relieved that I picked a horse that likes his job and likes to jump clean, which is all that matters.” 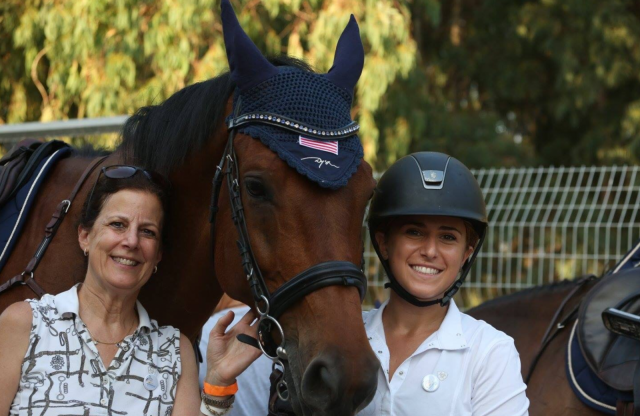 The competition began today with a 1.15m first course. Although Andrea has been focusing on her show jumping in preparation for the games, she says there were still some definite differences between herself and the show jumping crew.

“I’m experiencing some extreme culture shock,” she says. “Not because of Israel, but because being a jumper rider is so different from an event rider.”

For instance, she says, they’d never heard of a monoflap saddle.

“I am the only person here with a monoflap!” she says. “I also thought that we were supposed to wear white gloves because that’s what we do in eventing and I think it looks professional. I was told that if I wore white gloves I would look like a ‘noob.’ Thanks (teammate) Syd. They also don’t wear stock ties, trot jumps even during the warm-up, and some don’t even show in hairnets!”

Despite the hot temperatures, the jumper team opted to wear their pink coats. USA, represent! Andrea walked the course with coach Kate, “trying to calm my nerves and not puke everywhere,” and watched a few rounds while her mom put Chin Chinello’s studs in. 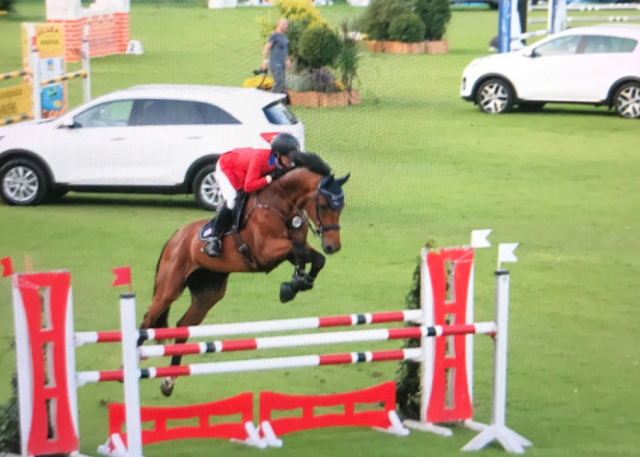 Teammate Chloe was first to go for the U.S. and had a great round, jumping clear with one time penalty despite her horse Manny being a bit spooky.

Andrea was next up.

“I got on and immediately felt Chin Chinello’s freshness from the atmosphere in the stadium,” she says. “I spent my warm-up trying to stay on all 17.2 hands of him, while he bucked after every jump. There were only two jumps in the warm-up that each coach had to fight over, since there were at least 15 horses sharing the tiny space. I was honestly more nervous in the warm-up ring than in the actual ring because it was so packed!”

She cantered into the stadium and walked up to the spookier jumps to give Chin Chinchello a chance to check them out.

“I started out under-paced due to my nerves, which resulted in a rail down at jump #4. And then at jump #5, the jump causing the most falls and stops, Chin Chinello tried to refuse and I could feel the whole stadium behind me clucking while I smacked him over it.”

“After that, I think we both got our act together and finished the last eight jumps clean! We ended with one rail and three time penalties, which obviously isn’t putting us in the top of the group, but everyone was ecstatic including my team. It took me a second to realize that I should be happy about my round because it hadn’t set in that I finished my first round!”

Haley was next and turned in a clear round inside the time with her horse, Harley. Syd was the last rider for Team USA, and the penultimate rider to compete. “We saw falls, refusals, rails — it was a way harder course to ride than it looked and Syd was on an Israeli horse that she leased so we didn’t know how he would be on course just like Chin Chinello,” she says. “Syd rode amazingly, with one rail down, to complete the first day for team USA!”

Team USA is currently sitting in second place behind Israel, which rode all their own horses. The next two rounds are bigger, and we wish Andrea and the rest of Team USA the best of luck! We’ll report back tomorrow with the final results. The event is being live streamed on the Maccabiah Games Facebook page here, and you can read more about Andrea’s experience on her blog here.