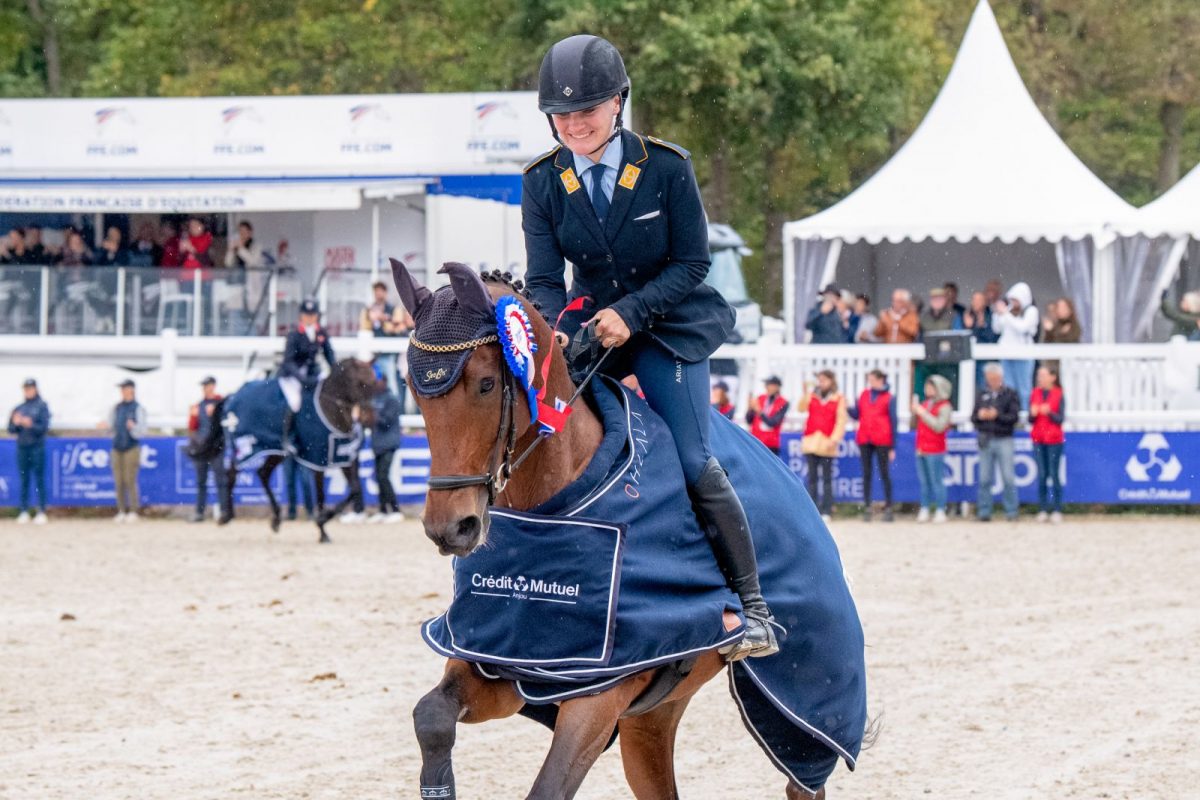 Germany’s Anna Lena Schaaf may not yet be a household name on this side of the Atlantic, but she’s certainly done more than her fair share to earn that accolade and has made some history happen in France this weekend during FEI WBFSH Eventing World Breeding Championships at Mondial du Lion. It’s not an easy feat to bring a horse back to Le Lion as a 7-year-old after competing as a 6-year-old — horses are sold, aren’t able to prep for the next level in time, get injured, and a multitude of things in between. It’s even more rare to see a 6-year-old champion return to win the 7-year-old title.

But never before has a non-French rider nor a mare taken the back-to-back wins, and Lena Anna has done just that. To boot, she’s done it in wire-to-wire fashion during both attempts with Lagona OLD (Lavagon X – Ile de Cartina, by Cartani 4). 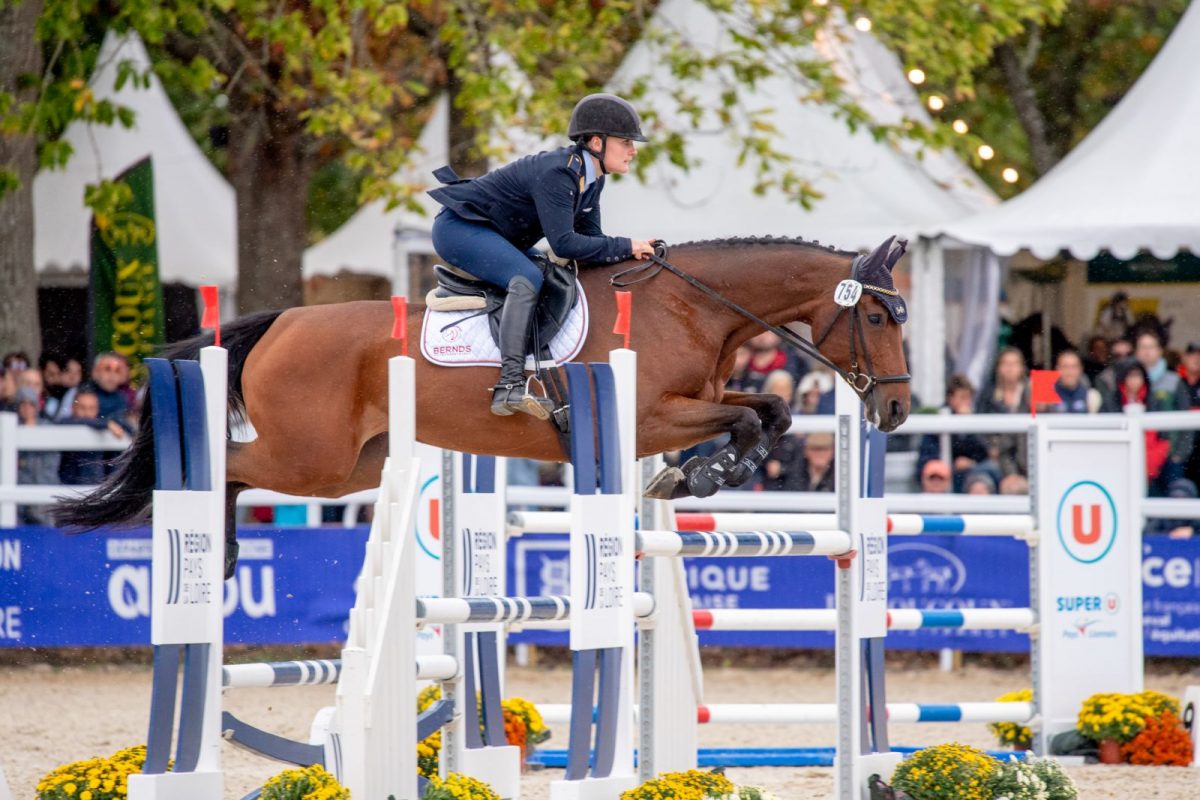 “I was quite nervous when I walked the course,” Anna Lena said. “But since I started jumping and she jumped the first jumps just like there was no cross country the day before I become a bit more relaxed. Still a bit of pressure but in a positive way.”

Anna Lena has credited the experience gained last year multiple times throughout the weekend when asked how she was handling the pressure. Le Lion is an experience unto itself, and often just being here before is enough to give some horses an edge over their wider-eyed counterparts. Add in the fact that Lagona OLD, a powerhouse in a small stature, seems to relish the attention from gathered onlookers, and the pair had the extra bit of oomph needed to jump clear — not having a rail in hand over second-placed Piggy March — and solidify the win, on their dressage score of 18.6, and a new championship title to add to the collection.

“I can’t put it into words how proud I am,” Anna Lena continued. For her part, Lagona (or just “Lene” in the stable) is described as “the cleverest and quickest horse I know. In the beginning, I don’t even like her — she was a real mare and sometimes a bit bitchy. But now, she is like my best friend!” Mare fans, rejoice over this assessment — I think we have all been there. “I think I am the luckiest girl to ride a horse like Lagona. We are such a good team and we really did this together. I think this is the best feeling you can get with a horse.”

All three American pairs in the 7-year-old championship find themselves within the top 10 at the end of the weekend with all pairs jumping double clear this morning. 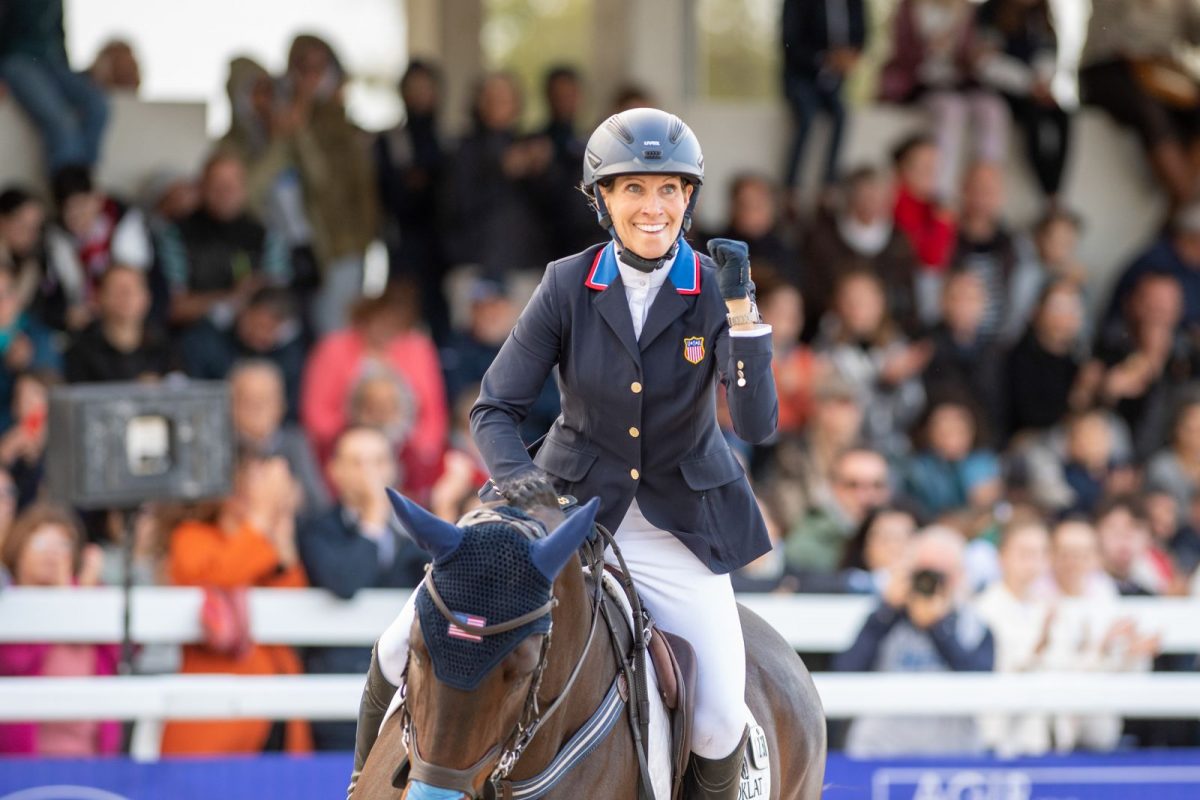 Phillip Dutton and Ann Lapides, Caroline Moran, and Neill Sipes’ Denim (Dinken – Celia II, by Ibisco xx) are the top-placed Americans, finishing the weekend in 7th after starting in 13th, followed by Liz Halliday-Sharp with Ocala Horse Properties Shanroe Cooley (Dallas VDL – Shanroe Sapphire, by Condios) 8th and Caroline Martin with her, Sherrie Martin, and Molly Hoff’s HSH Blake (Tolan R – Doughiska Lass, by Kannan) in 10th. To read more from the Americans, with whom I caught up yesterday, click here. 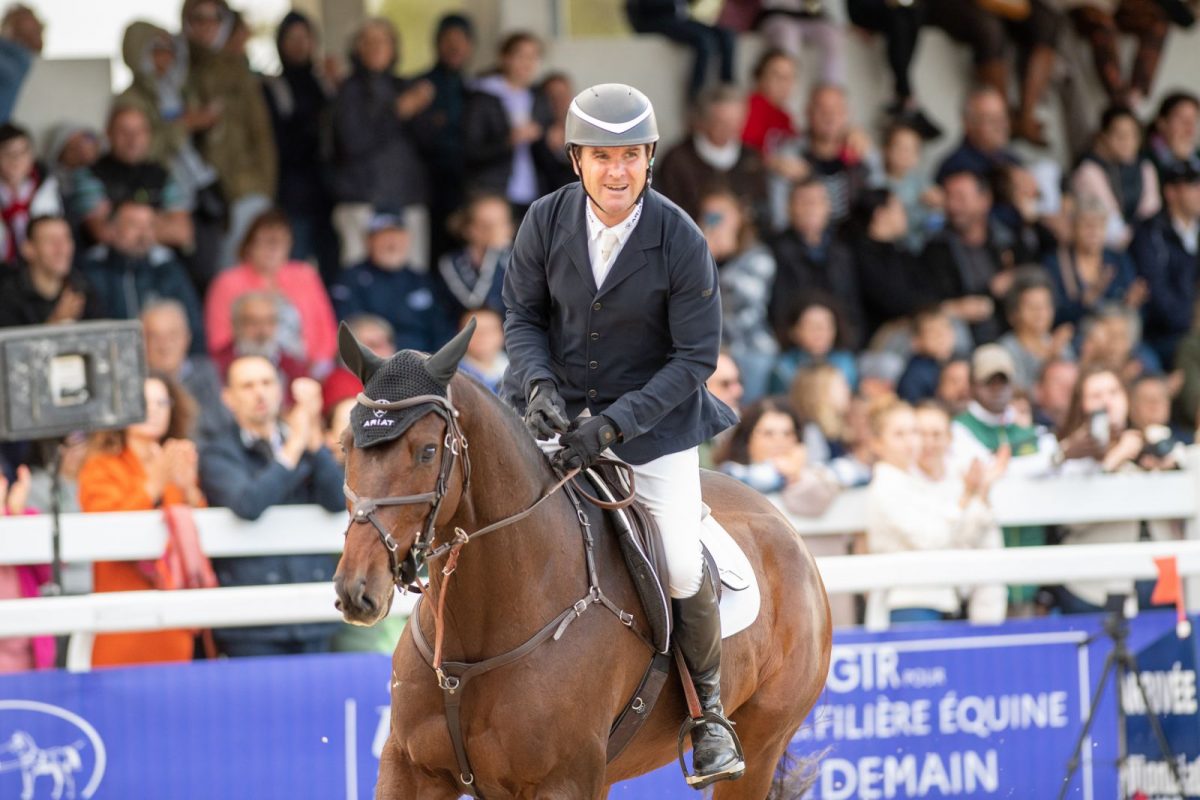 Phillip Dutton makes his mark on his first trip to Le Lion with Denim. Photo by Irish Eventing Times. 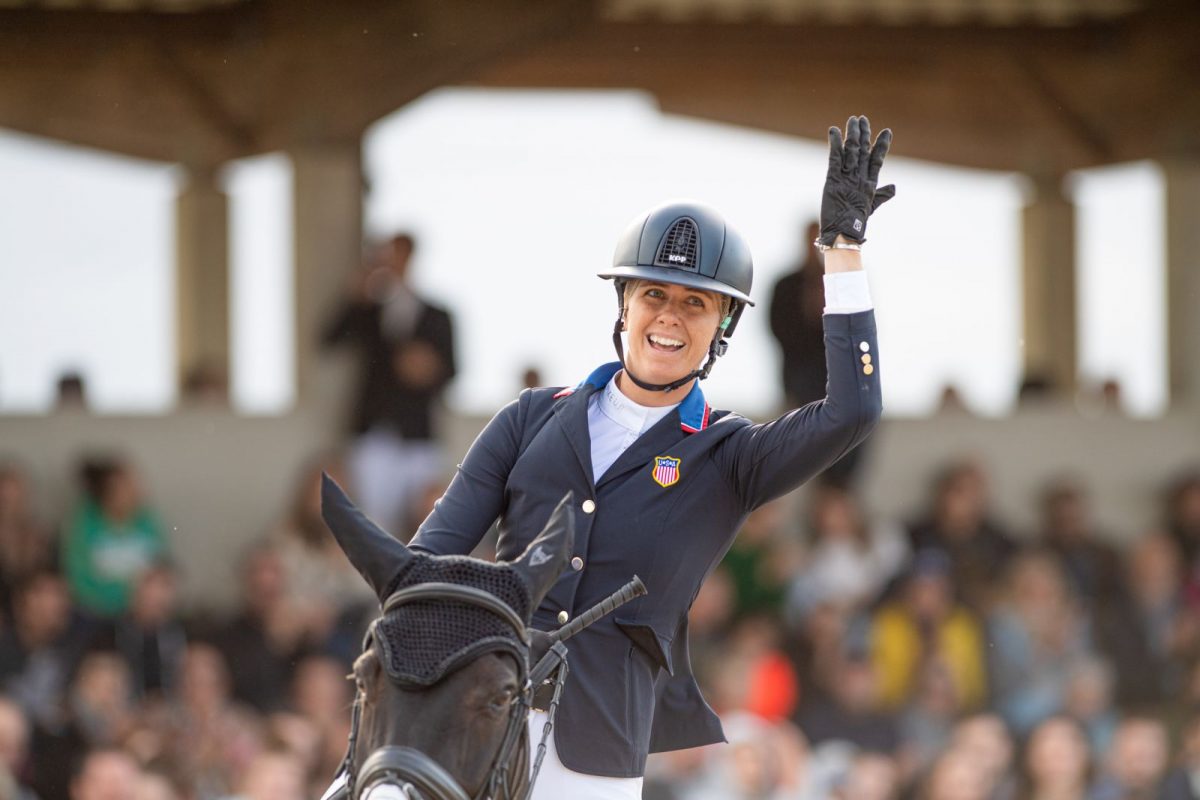 A heartbreaking rail would drop two-phase leader Caroline Martin with her, Sherrie Martin and Luanne McElduff’s 6-year-old HSH Connor (Connor 48 – Galwaybay Merstona, by Mermus R) out of the winning spot today, but they will still take home a well-earned second place for their efforts this weekend. While Caroline will be disappointed about the rail, her results this weekend should give her a float of confidence to take forward into her final European event next weekend: the 5* at Pau with Islandwood Captain Jack.

Rails were scattered throughout this division and double clear efforts were rewarded with moves up the board; in this fashion, French rider Tom Carlile would move into the winner’s spot for the home nation aboard Scea de Beliard’s Golden de Beliard AA (Upsilon – Vieusigne, de Maury, by Jalienny). Yes, that’s Tom’s old hat partner and prolific sire Upsilon listed as sire of this Anglo-Arab mare, making this win an even more sentimental one for Tom. This mare is also a half-sister to the horse with whom he earned his first win at Mondial du Lion, Sirocco du Gers, another product of the matchmaking abilities of breeder and owner Gerard Brescon. 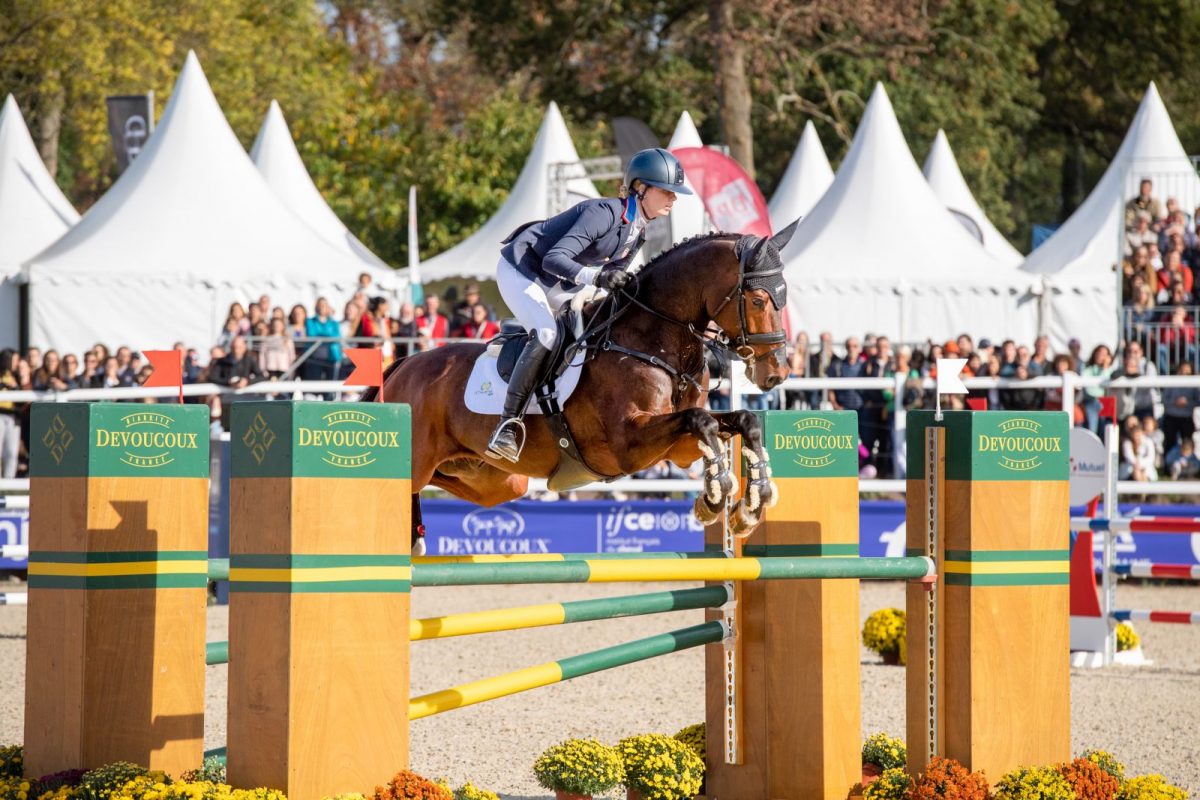 Caroline Martin and HSH Connor lower one rail but finish on the podium in the 6-year-old Championship. Photo by Irish Eventing Times.

“It puts stars in your eyes,” Tom said to the media after his win. “This is also young horses. I love the high level and I live for it but it’s true that sometimes, when you have a hard blow, you get on a young horse and you start dreaming again. And there are dreams that come true. It’s the young horses that make us dream, speculate, it’s nice.” Tom says he’s got every intention of aiming for the 7-year-old title next year, provided, of course, the mare continues to show her blossoming confidence and talent as she moves up. 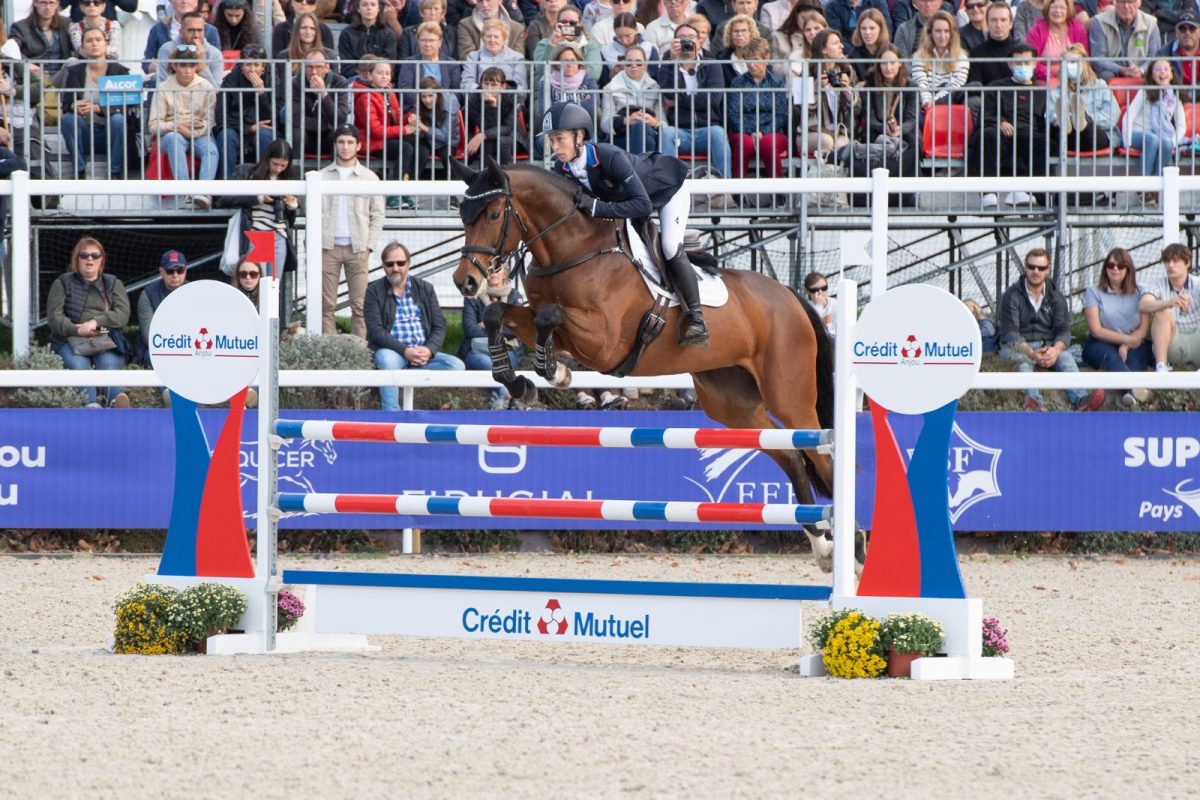 Also rewarded for her double clear efforts this morning were U.S. rider Cornelia Dorr with DHI Qyaracolle Z (Quinar Z – Celiacolle Z, by Chellano), who leapt up the board all weekend after starting in 16th to finish in fifth overall. 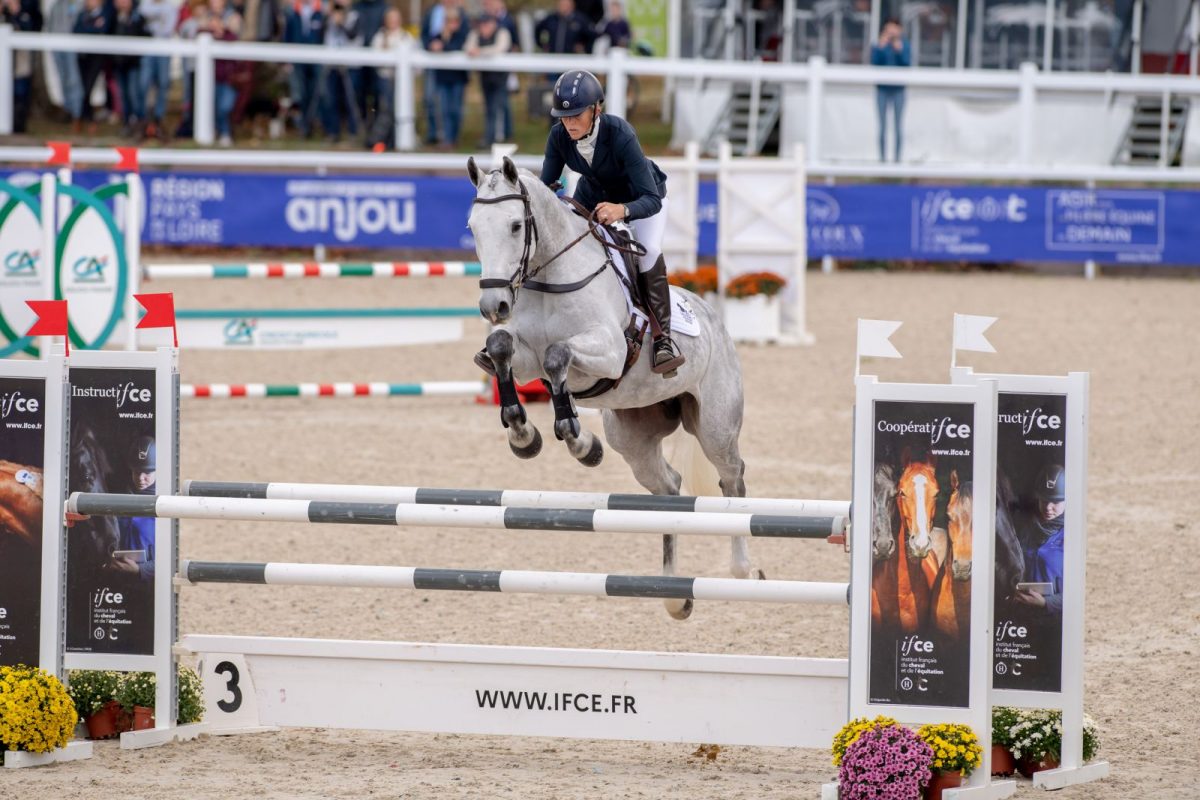 Canada’s Kelly McCarthy Maine and Cooley Cardento will leave France with more experience on the big stage — we can’t wait to see what’s next! Photo by Irish Eventing Times.