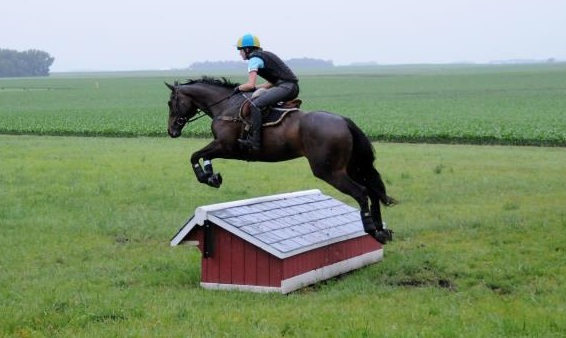 While Laura Olson’s horse isn’t a breed that’s rare in eventing, her 12-year-old Appendix mare represents a special and often-overlooked type of horse that can be worth its weight in gold and bragging rights: Ellenore, better known as Ellie, is blind in one eye.

“Ellie got diagnosed with uveitis last summer while I was trying to sell her before I began college,” Laura explained. In addition to participating in the Junior Developing Rider Program with Becky Holder, Laura and Ellie won their first Junior Novice class at Otter Creek Summer Horse Trial in 2013.

The pair was schooling Training level when Laura put Ellie up for sale due to money and time constraints. During a pre-purchase exam, the vet found cataracts in Ellie’s right eye, and determined that she would most likely lose all sight in that eye due to uveitis. As an eventer, being even partially blind can mean the end of a horse’s career, and Laura was faced with the sudden situation of owning a horse that no one wanted to buy.

“No one wanted to touch her with a ten-foot pole,” Laura recalled. “It was a mixed bag of emotions for me, because while I was frustrated that everyone looked at my horse as being worthless, I was able to keep her.” 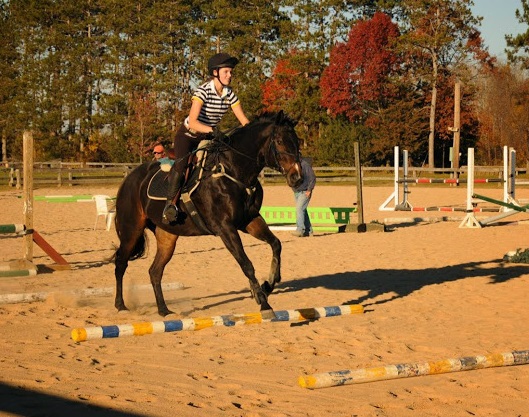 While keeping Ellie turned out to be a blessing in disguise, Laura found that keeping her mare during college led to more difficulties than just making ends meet financially.

“While we went through a rough patch while Ellie was losing her eyesight, now that she cannot see out of that eye at all, it has made things a lot easier on the both of us,” Laura explains. “While the cataract was forming over her eye, she was able to see kind of a blur of everything, so changes in light and stadium distances really freaked her out.”

Now, Laura says that her communication with Ellie has changed in many ways over the last year. Thanks to clinicians such as Yves Sauvignon and Ralph Hill, the pair have found new methods to help Ellie regain confidence over fences.

“(Yves) has helped me develop a different communication style up to fences, which means approaching things from an angle (riding fences more left to right) so Ellie can get a good look before she jumps. I have also been taking weekly lessons with Ralph Hill, who has really helped me understand what Ellie is feeling based on the way she carries her body… I have become so much more aware of my position and hers.”

Ralph Hill says that Ellie is an “exceptional horse,” and is happy to help Laura and Ellie go back to basics to “give her confidence and a solid foundation before moving her back up to the level that she was previously at.” Her love of jumping and competing “makes it worth retraining her despite her loss of eyesight.” 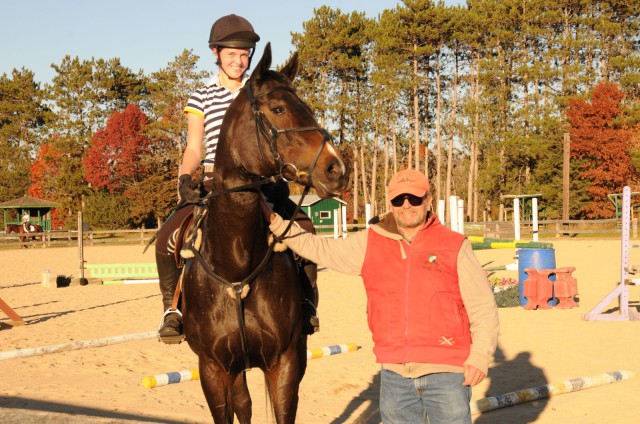 “Before losing her eyesight, I think I took Ellie’s talent and bravery for granted,” Laura said. “After spending so much time with Ellie, working on teaching us both how to ride and jump in a way that better suits her new situation, I feel so close to her. I feel like we are a much stronger team than we have ever been, and I’m really excited to continue to watch her grow.”

“Ellie makes me so proud every day,” she adds. “She tries so darn hard and is such a brave girl that every time I ride her, I feel lucky.”

Watch this video of Laura and Ellie riding with Yves in summer 2014. Looking good, girls! Best of luck, and Go Eventing.