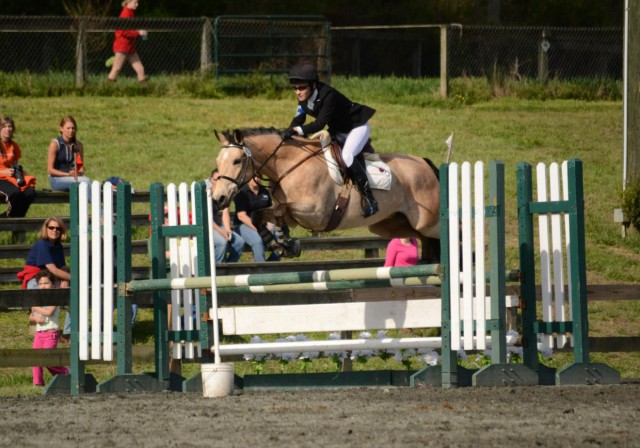 After years of riding lesson horses, Katharine Stancliff found herself frustrated with the lack of progress her riding was making. Living in Illinois at the time, Katharine decided that the time had come for her to have a horse of her own, so she mentioned the idea to her trainer.

As luck would have it, Katharine’s trainer had a new sales project that had just arrived. He was a 15.3, 8-year-old buckskin Connemara/Trakehner cross named Poppyfields Tristan with long lines of endurance blood coursing through his veins.

“I didn’t look at any other horses. I sat on him, and that was it,” Katharine recalled. “He’d just been a trail horse before, but he’d gone cross country schooling once and seemed to love it.”

Katharine was eyeing a switch to the eventing world, but the transition was not without its hiccups. “I took him to a mini event and did Novice, and our dressage was terrible. It’s taken me eight or nine years to try to convince him that he doesn’t need to be a giraffe!” she laughed.

The work was worth the rewards, though, as after Katharine and Tristan’s first cross country course she succumbed to tears of joy at the accomplishment they’d just achieved together. “I think I was just hooked on the adrenaline rush,” Katharine said. “I was just so excited to have accomplished it — and most of that excitement comes from him. He just loves cross country.”

Katharine has taken her time with Tristan, spending time at each level until it becomes boring. “We did Novice until it was boring and then stepped up to Training. We had some rough times because for me it was a big step up, and now we’re going through similar growing pains stepping up to Prelim.”

A self-professed cautious rider, Katharine credits Tristan for taking the reins and giving her confidence through the years. “I’m a very meticulous rider, and most of my background is in dressage,” she said. “I enjoy the adrenaline of cross country, but I’m very afraid of doing something that would hurt either of us. So we’ve just kind of crawled up the levels.”

“I know we are nowhere near hitting the limit of his scope,” she continued. “With a more confident rider, I have no doubt he’d be going Advanced. But he’s been so great to me and safe to ride. If we get in a sticky spot, he either figures out a way to make it work or he won’t jump because he wants to stay safe. He’s always looking out for us.” 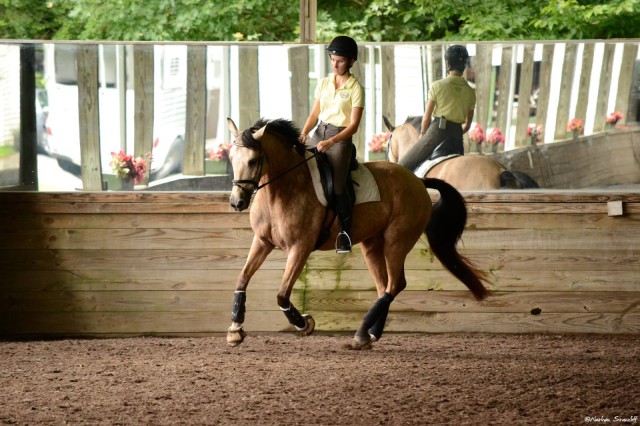 “He’s not quick off the cross country like the Thoroughbreds are, but he still comes off feeling like he could go around again. He can be a little hot and stubborn, but I like the Connemara in him because he’s always thinking and trying his best.”

Tristan is 16 now, and while he shows no signs of slowing down, Katharine remains realistic about her goals with her wonder horse. “I have my eyes on a one-star in the future. I’d love to finish his career off that way,” she said. “I’ll let him tell me if it’s something he wants to do. He’s my best friend, and I don’t want to do anything that would put him in a bad place. If we do a one-star, it will be because it’s the next logical step for us and it’s easy for him to do.”

Always a planner, Katharine decided that her experience with the Connemara cross was something she wanted to continue in her next horse. She contacted Tristan’s breeder, who advised her to contact Black Dog Farm’s Beth Davidson, who breeds Connemara crosses for sport.

“Tristan’s breeder told me that she has mostly Connemara mares now, and that I’d be better off with a Connemara stallion and a Trakehner mare,” Katharine said. “She didn’t want me to end up with something too small. So I’ve been in touch with Beth (Davidson) and I plan to find one that she’s bred when it’s time for me to have a new horse.”

In the meantime, Katharine is enjoying her new season with Tristan; they most recently completed the Training division at The Fork and will be working on a successful run at Prelim this season. “We’ve really enjoyed this partnership, and I’m looking forward to seeing what he can do this year.”

You may remember one of our most-loved helmet cams here on EN, which we shared with you last year. Click here to revisit Katharine and Tristan’s emotional trip around the Prelim course at FENCE last year.