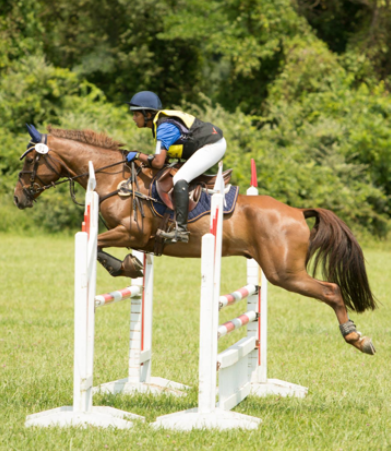 In search of a new horse several years ago, Amanda Sylvia ventured to the Chincoteague Pony Swim, returning home with a precocious 4-month-old colt she named Southern Storm. “Amanda goes to the pony penning every year,” Southern Storm’s rider, Anna White, said. “One year, she decided to try to buy one, and so she did some research on the island lines, as she wanted to end up with a horse that would grow a bit taller than most.”

The prices on the island ponies range from three to five figures on any given auction day, but Amanda was able to come away with her chosen foal successfully. “When she first got him, he injured himself so he was laid up for awhile,” Anna said. “Once he was grown up and ready to go, she sent him to a western trainer, so he was trained that way for a couple of years.”

Southern Storm, or “Hershey,” came back to Amanda at the age of 8, having matured to a height of 15.1. Amanda began to look for options to keep him in work, and Anna so happened to be looking for another horse to keep her own company when she went to college. “I’ve been good friends with Amanda for several years, and she offered to let me take Hershey with me to work with,” Anna said. 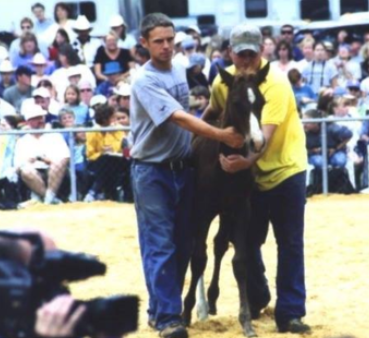 When Anna and Hershey began working together, he had never attempted a jump before and had only been ridden western. “He was terrified when he first started,” Anna said. “(Amanda) would put a fence in front of him, and he would just charge and gallop through it. At first, I didn’t know if it was going to work.”

Once Hershey began learning and gained some confidence, jumping started to come much more naturally to him. “I don’t know what truly clicked in his brain, but I gave him a month or two off, and when he came back, it was like he’d figured everything out.”

Anna took Hershey out to a Starter level horse trial to test the waters on cross country, and he quickly figured out that the fences were solid and that he had to respect them. “Once things click in his brain, he gets it. He realized that the fences are solid, but he was super brave. He’ll climb over something before he’ll stop at it,” Anna said. 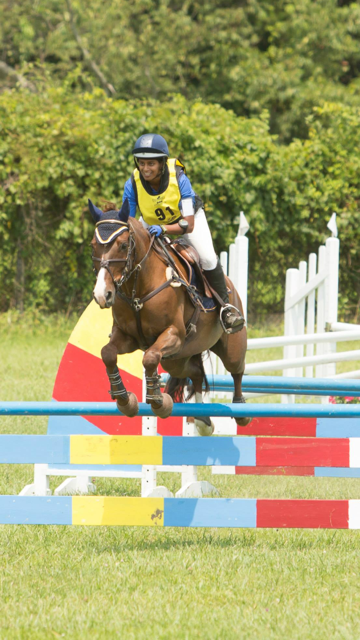 Much to Anna and Amanda’s delight, Hershey is now successfully competing at Training level. “When I took him on, I wasn’t expecting him to go really far,” Anna admitted. “He’s built rather awkwardly, with a long back, and you’d never expect him to be able to run Training level if you saw him. He looks like he could get around Beginner Novice or maybe Novice, but he just keeps proving us wrong. At this point, I don’t think Prelim would be too big of a stretch for him.“

Since Hershey had western training as a foundation, he tends to have a very soft mouth and get behind the vertical a bit on the flat. One of the challenges Anna faced when working on his dressage was lifting his poll and encouraging him to sit on his hind end. “Since he’s not built like a Thoroughbred, he doesn’t have a big hind end to sit on, so that’s something we’ve really been working on. It’s still a work in progress.”

Hershey definitely has many traits of being an island horse that are beneficial to sporthorse work, including great feet and an overall hardiness. “He’s had no soundness issues, and he’s got wonderful feet. He’s also very level-headed, and it takes a lot to rattle him.” 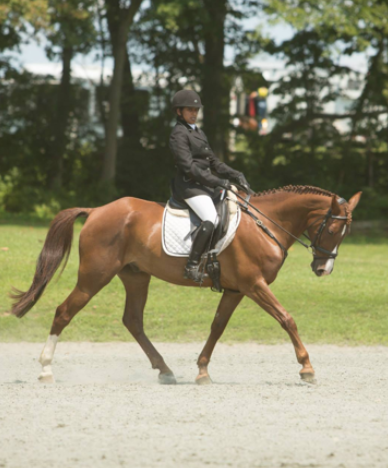 Anna is grateful for the opportunity to ride this talented Chincoteague Pony and said it has been a joy to work with Amanda. “She is just the most wonderful owner. She’s very supportive of him,” Anna said. She works for SmartPak and always ensures that he has everything he needs, she’s just been the greatest support for this whole thing.”

Anna plans to take Hershey out at Training level for the rest of the year, aiming for the Virginia Horse Trials as the final event of their season. “Fair Hill was his first sanctioned Training run,” Anna said. “We’ll see how he does and go from there. We won’t push him up to Prelim for awhile until he gets really solid at Training. There are definitely some questions about his athletic ability, but I thought he would max out at Novice, and he’s certainly proven me wrong. We will just have to let him tell us what the next step should be.“

Editor’s Note: Growing up, Misty of Chincoteague was one of my favorite books and movies. After learning that the Chincoteague Pony Swim was a real thing, I immediately added the annual event to my bucket list. When Anna sent us her helmet cam from Fair Hill with Hershey, I had to know more! Click here to watch the helmet cam.