The subject of an Amateur’s Corner interview in 2021, Elena Perea is an Emergency Room physician who balances work, family life, and competing in Area II. In her latest blog, she brings some unfortunate chronicles on the trials of being a human on stall rest. 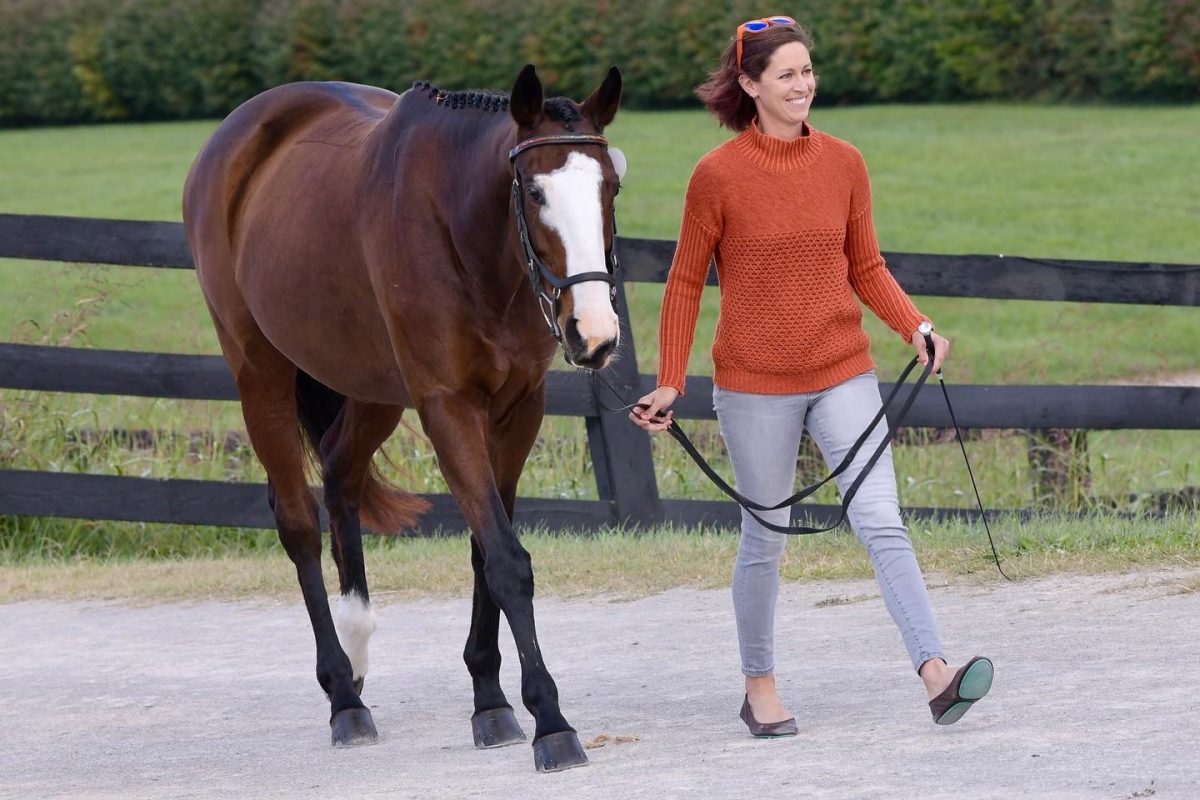 The year 2021 was, in a word, uneven for me when speaking about my horse pursuits. I’ve previously written about the number of times I was eliminated in the spring (three), the number of shoulders I cried on (many), the number of people who lifted me up (the same many), and my triumphant top 10 finish of the American Eventing Championships. I was lucky enough to have a second-place finish at Stable View in September, followed by successful completion of the long format Training Three Day Event at Hagyard Midsouth in October.

We took November off, and I was just getting “Beezie” back jumping in mid-December, with grand thoughts of a Prelim debut in the winter of 2022. My trainers and I had put a sketch of plan together, and were cautiously eyeing a successful season.

In an effort to save some time after finishing a Sunday shift in the emergency department, I took my horse out to the jump field with me to set fences before I got on to ride. In the process of leaning to grab a jump pole, I tripped over my own my own feet, and found myself on the ground. My right shoulder was not where it was supposed to be, I calmly observed. Luckily, I had seen all of the Lethal Weapon movies (and also gone to medical school), so I made the quick decision to reduce the dislocation without too much fuss while my very confused horse watched from above.

I have some pretty lax joints, and had subluxed both shoulders before. This felt different, but I was hoping I would bounce back. Three days later and still unable to sleep at night or raise my right arm, I went to the orthopedist, had an MRI, and was told “We usually see this injury in 80-year-old women.” (I think I heard that three times from three different people, and should be praised for not smacking any of them for inferring I was the equivalent of 80.) “There are large complete tears of the supraspinatus, infraspinatus, and subscapularis muscles. They are fully detached from their insertion. The long head of the biceps is displaced medially.”

Interpretation: big-ass rotator cuff tear and associated badness. No amount of rest or PT would to allow me to lift my arm from my side. Surgical repair would be necessary for any return to function. 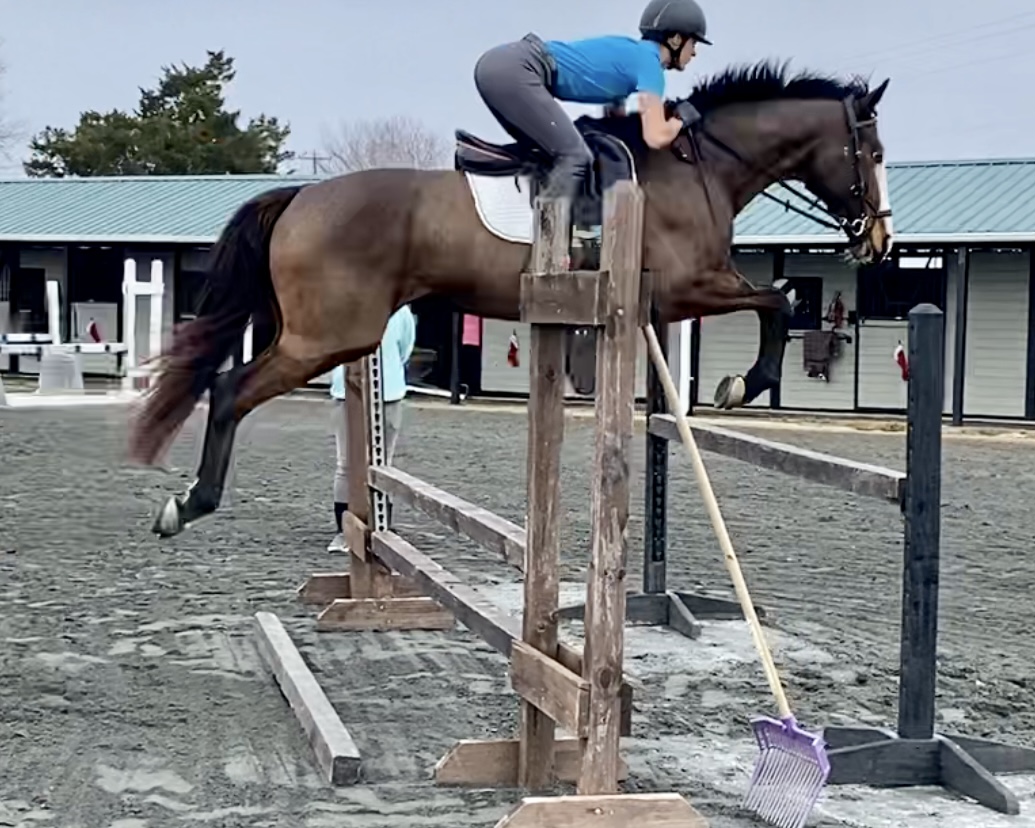 Four years ago, I broke my wrist, and was back on the horse within a week of having a plate screwed to the pieces of bone; this recovery was not that.The doctor outlined seven weeks in a sling, no driving, 12 weeks not being able to bear any weight or carry anything that weighs over 1 pound in my right arm, 12 weeks more to get back to my original strength. “Maybe you will be able to get on a horse four-and-a-half months postop.”

I spent five years getting ready to move Beezie up to Prelim. This is something that pros do every day with baby horses but something that I haven’t done, and has taken a lot of blood, sweat, and tears (on my and the mare’s part) to approach. And now I found myself on the precipice, and out of the saddle for six months. I was overwhelmed with grief—to have come so close to that goal, and be brought up short at the last minute devastated me.

I’ve spoken before about my Eventing Community, and again, they came to the rescue. My friend/trainer/dressage guru/past winner of the Thoroughbred Makeover with the unforgettable Cactus Willie Allison Thompson lept to my rescue, and took Beezie for the first three weeks I was hurt. She missed no time under saddle, progressed, and I got to watch someone else jump her for the first time ever. Allison goes to Florida for January and February, and I didn’t want Beezie that far away, so I needed to make some decisions about what to do with her.

Allison, my other trainer JM Durr, and I discussed a couple of options. Having her hack with my 12-year-old little boy Teddy and various other catch riders for six months, and both of us come back into real work together, seemed a waste. JM volunteered to have her in his small program and take her to her first Prelim or three. I weighed the options. 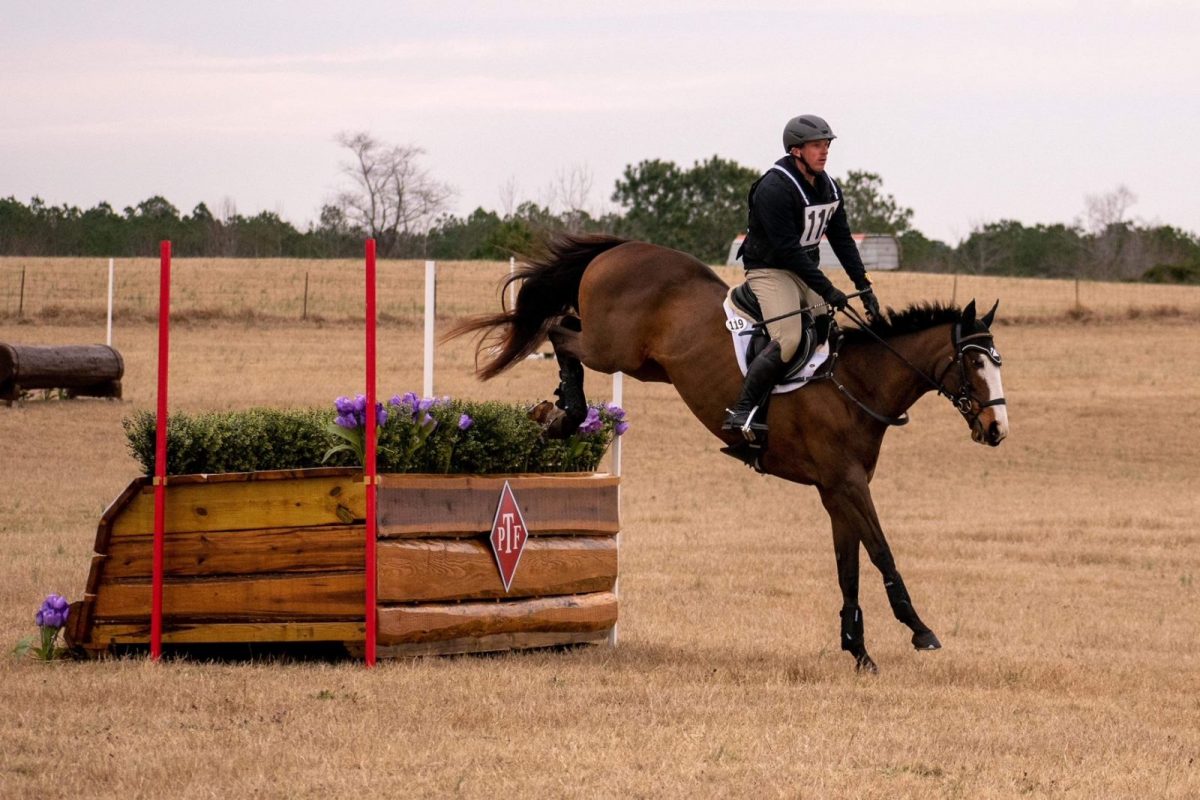 I have significant pride and meaning wrapped up in the fact that I have done all the riding and competing on my horse since she came off the track. I nearly died several times in her 5-6-7-year-old years, but the last three years, we have honed our relationship, and we are a real team. Having someone else take the reins is at once lovely to see, and disappointing. I also know that a positive go from a decidedly non-amateur around a level that neither the mare nor I have done before could be the smartest thing I have ever done for her. So, two weeks ago, in my 3rd week post-op, eight weeks after my injury, I packed her up into my orange trailer and sent her to Tryon. Beez jumped beautifully her last Modified with JM last weekend, and is doing her first Preliminary this weekend.

Now five weeks post-op, I still can’t drive (technically) and am wearing a horrible sling with a pillow holding my arm at an angle from my body to limit pressure on the repair. Taking clothes on and off is the hardest part of my day. Mundane things like feeding myself (did I mention it’s my dominant arm) take a long time. I can’t put my hair in a pony tail. I can’t do anything for exercise except walk. I’m going stir-crazy, am insanely jealous of the people showing in Aiken right now, and lonely missing my friends for our planned VacAiken week. I’m planning my escape from the stall; I’m gonna need to be sedated.