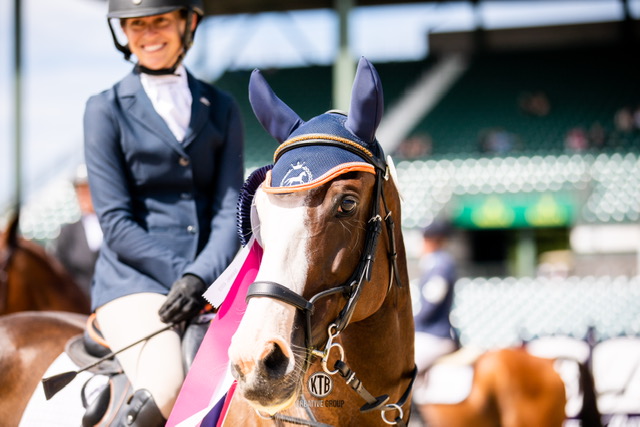 2021 was supposed to be a great year; after last year, we all hoped for it, even expected it. I think I, perhaps more than the average eventer, particularly needed it to be amazing. It started auspiciously with a vaccine and a sense of an end to the very dark time in my career. I had second successful run at Modified in late January, followed by a ribbon at Carolina International in March. 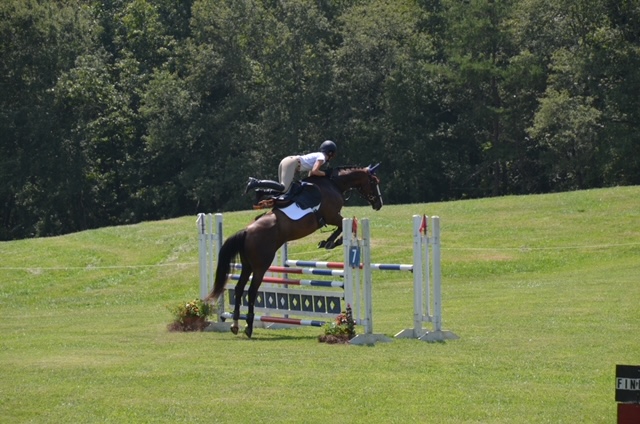 Resilience is the ability to adapt well in the face of adversity—trauma, tragedy, threats, basic run-of-the-mill stress. We are told that resilience is important. We are supposed to build resilience as if it were wealth, to bank it, to hold it dear, and then use it when we need it. As a physician in a pandemic, my resilience bank account has been drawn upon repeatedly over the last 18 months. It was in danger of overdraft charges filed. Then I had to go and blow up two solid years of forward progress in training and going up the levels. It felt, at the time, like the lights had been turned out, and I couldn’t see the way out, much less forward.

Not to give away the end of the story, but two weeks after I fell off (see picture below), I did go to the AECs, and I did kick ass. I did find the way through that darkness; I didn’t do it alone with some mysterious innate “resilience”. 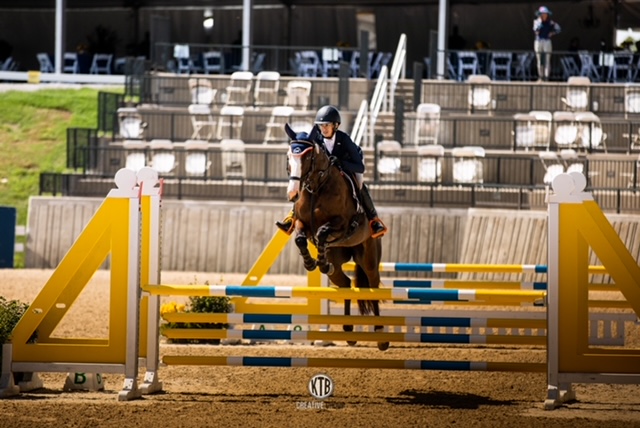 I go to shows with my community of friends. This is what we do: we meet at horse shows, help each other, and have a party. When I made a stupid mistake and jumped the wrong jump on cross country, they heard me. I called my best friend, who heard me. My coach, she heard me too. They all listened, and then they responded—they knew what I was going through, and encouraged me to try again. I did, and again, and again, and I repeatedly made different mistakes. Every time, they lifted me up with words of encouragement, stories of their own experiences, and promises to be there. They were the base of my continued willingness to put myself out there.

My community had made plans to go to the AEC last year, were crushed when it was cancelled, and promptly rescheduled. We were going, and falling off two weeks before with no injury was not going to be a reason to not go. So I went. We dealt with a hurricane. One of us had to stay
home with a husband with COVID, but was called and Facetimed regularly. One of us drove from New Mexico. But we went, and we went together, as a team. 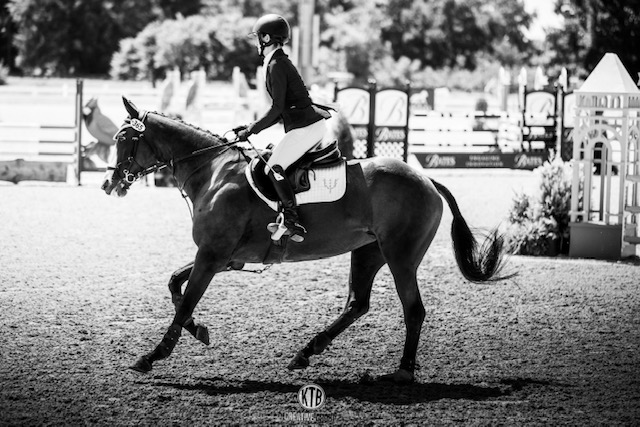 The day of cross country, I was so nervous that I had to take a walk, cry actual tears, and give myself permission to not ride. As soon as I said those words out loud to myself in the parking lot, I knew that my community had given me the resilience to try again, and I was not taking
that out. I went to warmup, my coach told me she’d never seen me ride as well, I left the start box yelling “thanks for volunteering,” and we finished on our dressage score. Our community gave each other love, even when we were in the midst of job changes, even when we were worried about our children and the future of our country, especially when our horses weren’t going well. And the entire aisle in our barn, from all over the country, won ribbons and coolers and money. Every single one. Because we have resilience, not coming from some mistic inner source, but from the love we show each other. 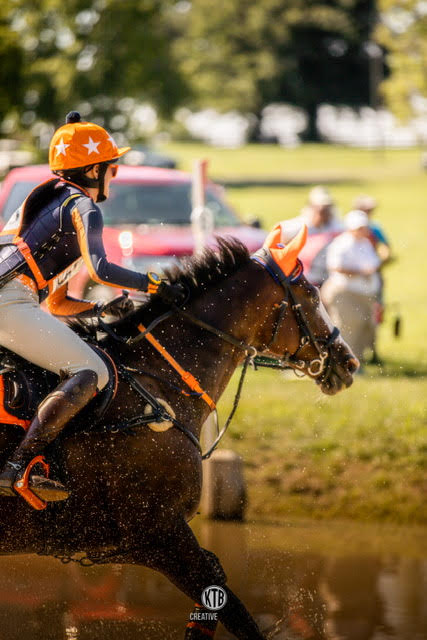 Resilience should be built as if it were wealth, banked, and used when needed. And we need to help each other to make deposits so there are savings when the time comes round. 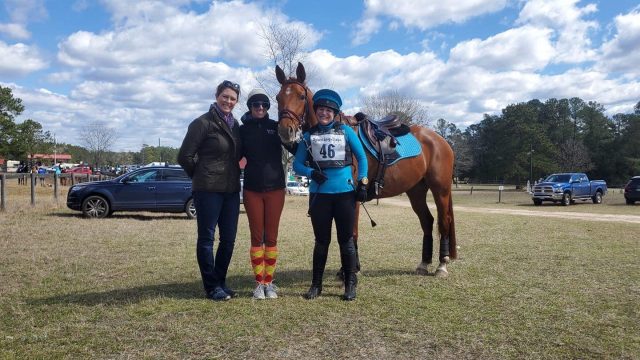 Everyone is sick of hearing about how COVID-19 has changed the world — we are living it every day. You can’t go out when you want or where you want. Millions of people are out of work and struggling financially. Parents are home-schooling, or struggling to get childcare.

Perhaps most disappointing to some readers here is the fact that equestrian competitions the world over have been canceled or delayed. Everything from Land Rover Kentucky to Badminton to the Tokyo Olympics will not happen this year. The disappointment from competitors who have worked their entire lives for this was clear, and the arguments against the decision of the USEF and others were voiced on the internet chatrooms and social media sites. “The virus isn’t that bad.” “It’s like a cold for most people—worst case the flu!” “Only the old or debilitated will die—who is old and debilitated that rides?”

As someone who reports to a tertiary care hospital for work every day, I can’t say thank you loudly enough to the USEF, USEA, USDF, and USHJA for heeding the warnings of experts. Every day, my colleagues and I sit down and take stock of what preparations need to be made in coming weeks: we are waiting for the storm we know is coming. It’s not here yet, but we can see it headed toward us, down the east coast, unimpeded by vaccines or sunny weather. 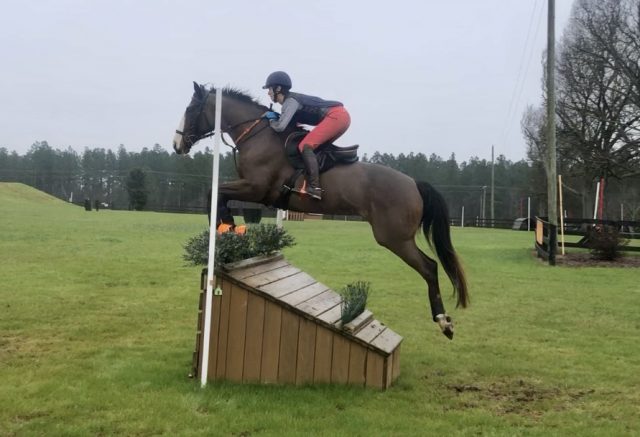 Elena Perea and B E Isabella at the Vista. Photo by Joanna Newton.

I went to medical school, through five more years of training in the field of psychiatry, and have been practicing and teaching for a decade at some of the best medical schools and hospitals in the country. If you had asked me at any point in the last 15 years of my involvement in medicine if I ever thought this would happen, I would have said not a chance. No way would we, the richest nation in the world, ever be unable to care for the people due to lack of beds.

Never would doctors be in short supply in the largest city in the nation. It was absolutely inconceivable. Somehow, however, retired physicians are volunteering for service. My colleagues and I are anxiously reviewing medical texts, trying to remember things we haven’t done since internship, just in case we have to practice a specialty that is not ours, to help the experts do the work of saving our country.

After the pandemic, we will still have horses. Mine is out there now, enjoying the break from competition, enjoying the spring grass. She really likes it when I come to see her and all I want to do is hug her and not make her work! She will still be there when it’s time, ready to go run around a Training, maybe a Prelim with my old debilitated adult amateur self.

After the pandemic, the events will run again. They will fill on opening day, since we will have missed them so much. They will draw spectators that have been housebound, and attract new fans. The events will be reborn, and the jumps will be freshly painted, and we will flock back.

But for now, please stay home, give blood, and thank everyone that works in medicine that you know.

Elena Perea is a physician in southern Appalachia, an adjunct professor at the UNC School of Medicine, and an avid adult amateur eventer.