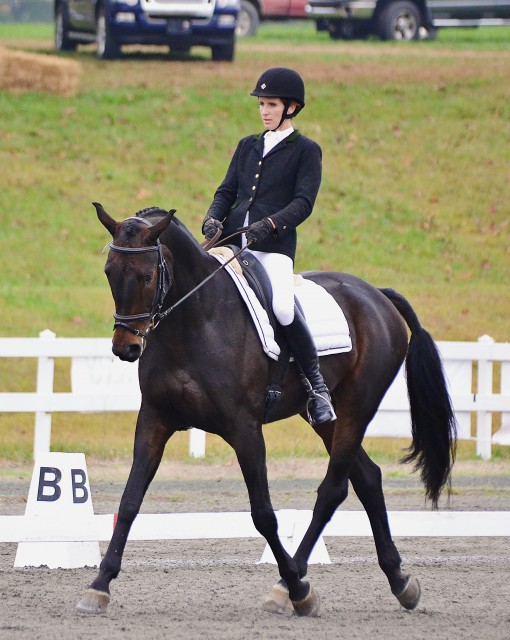 A few weeks ago, Garth competed Preliminary at Full Gallop Farm. It was a great day – not because of the ribbon we brought home (spoiler: we did not win), but because of the great learning experiences this competition provided.

An early morning from the time change and clear skies set the tone for a beautiful day. The footing was slick from all the rain and the dressage rings were on grass. We warmed up nicely, though he felt tight in his back. I wondered if the combination of three 30-degree days and the jumper show Friday had some lingering effects on his muscles.

Dressage was fine – it wasn’t spectacular, it wasn’t what either of us are capable of, but it was perfectly fine. We had some tension in the canter, and I think we would both prefer to perform a flying lead change at X instead of a simple change. He tied for 5th with a 35.0.

Somehow, magically, Garth developed a ton of muscle over the winter. And he grew. He’s big, strong, and becoming a bit opinionated. He thinks he is very cool (I do too, but I try not to inflate his ego). While working with Kim over fences, he was so strong through the neck and into the bridle that riding him was hard work. He has given me a great set of well-defined arms and shoulders, but that’s not what I was hoping to achieve. She suggested a pelham – pure magic. Pure magic at Sporting Days a weekend prior. Today, over fences, he was backed off by the bit. When I rode him correctly, forward and straight, he was spot on. But, if I did not put all the pieces together in time for the next jump, we had a poor ride. Example: Fence 1 – I see a slight move-up distance (I’m sorry Kim) to the oxer, but I did not support with sufficient leg to support the half-halt with this stronger bit. Garth, appropriately, put in another stride and I gave him a poor ride. Perhaps his way of telling me to wake up and ride? I think all of this is a culmination of a tight back, fatigue and a long wait (stadium ran 30+ minutes behind), and me learning to ride the horse I had today in new equipment. Sadly, we pulled a rail at the last fence with his hind end. The first rail on his record. Shame. I was enjoying all those zeros! We stayed in the tie.

Cross-country was a dream. This horse is a dream! He is freakin’ brilliant. I adore him. The ride was the kind of ride I look forward too – and when I’ve experienced it, nothing tops that time in the tack. After switching bridles and putting on his galloping boots, we headed to the start box. We saw nearly every fence out of the gallop stride. We adjusted strides out, and pressed forward to the distance. He was sharp, keen, and on target. He was having fun. We breezed around the course like we were jumping baby logs. The course (designed by Hugh Lochore, designer of the new Red Hills course) was lovely and fair, with some great questions: a coffin of a chevron, ditch, narrow roll top; jumping logs into the water with a bending line to a corner up a slight hill; two narrow houses aside the second water complex place atop hills, on angles, with a valley in between them; and a sunken road with a skinny chevron 2 strides out. He locked on to each fence and worked right up to it. His gallop was efficient, ground covering and light. I found myself questioning if I had ridden all the obstacles. Absolutely brilliant. If we continue in this manner, Intermediate is well within our grasp.

Garth ended in 5th place. I’m not sure how he feels about the color pink, but he is drenched in blue in my eyes. It was a fantastic day. I am so glad we ran this event, and were able to learn so much about our partnership and my riding. I am thrilled to have felt the “new Garth” on XC. I could not be more pleased, more excited, or more proud!