EN reader Melanie O’Neill sent us her story of comebacks with Viggo (Fly You Fools).  Melanie writes, “I hope to be an eventer again but getting peeled of a cross-country course can take you down a peg.  I have 3 kids and work multiple part time jobs including event organizer/secretary at Bucks County Horse Park, veterinary receptionist, and a traveling trainer.”  Many thanks to Melanie for sharing, and thank you for reading.  If you have a submission for Eventing Nation, send it to [email protected]! 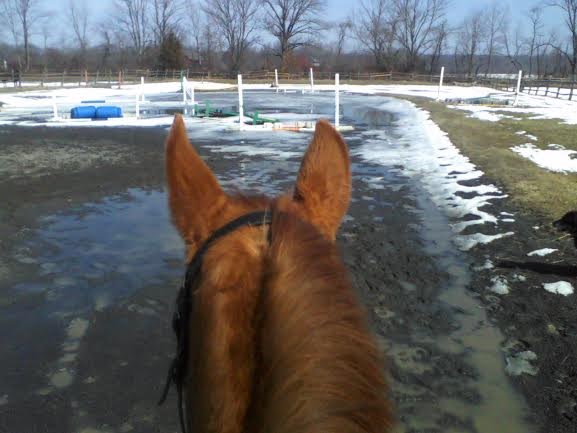 This is my horse Viggo working in the outdoor ring, at least in the part that is usable.  This has been our year of comebacks and think we are on number 47.  I think it’s our lucky number.  Last summer I had two trips to the ER: A broken nose from a barn quad accident, and hauled off the cross-country at an event babbling and unable to name the current president.  We managed to come back from each and put in a nice test at a dressage show in the early fall, just for Viggo to come up lame shortly afterwards.  He came back sound, and then fall into winter had 2 separate kicks and a puncture wound.  Two caused cellulitis and one an antibiotic reaction that left him unable to bend his neck to eat.  And then the winter of 2013-14 set in….

He is not an easy horse to ride after time off.  And winter is never his good time, oscillating between laziness and spooking/bucking.  I’m 48 and with so many recent brushes with fate I had about lost my nerve.  I was riding scared, talking myself into the saddle and barely getting more than a western jog.   Otherwise using any excuse not to ride. At about that time a friend had a pretty serious fall off her horse.  And she decided to send the mare to a “cowboy.”  It made me look at Viggo in a new light.  My partner of 9 years and I were missing something in our relationship.  I am a part time trainer and I always use groundwork in my training.  But I had never done that with Viggo, at least not with any kind of consistency.  People would say lunge him first but I was never a fan of wearing a horse down on the lunge.  Then there was that time years ago that he got away from me and ran around the farm screaming, dragging the lunge line.  He was always respectful to lead so I thought I didn’t need to do in-hand work.

I started to do ground work only work sessions.  I worked in hand making him listen to my body language and demanding 100% attention.  I could do this with confidence without fearing a buck that may come with a tap from the whip.  Then I started lunging but differently than I had used before.  I asked for connection, the same connection that I had while riding. I asked for attention and obedience.  I worked through spooky spots in the indoor on the lunge.  I had to giggle the one time when on the lunge he bent down to smell a poo pile and I said NO and flicked the whip and he almost groveled his obedience.  I gained confidence; we became a team.  I started getting on after groundwork and I felt able to deal with anything that may come.  Once with my trainer, we worked though a spook spot and I won.  I mean to say, we won.  I was Viggo’s leader and gave him the ability to trust me.

Things were going along great then another setback.  While cleaning stalls I heard a crack from the indoor and looked in.  I could see light coming in that shouldn’t have been there.  I called the barn manager over and we could see a beam over the door was broken, bent down in a V shape.  Cracking sounds were coming from the building.  She called the barn owner and I went over to tell friends that were tacking up, not to ride.   Within 10 minutes the center section of the indoor collapsed.  With a crash and a WOOSH that sent people and dogs running and cloud that blew everything out of the barn aisle. 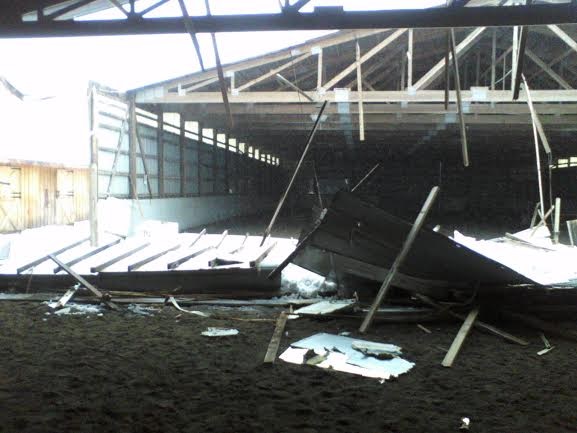 The outdoor had not been plowed since we had the indoor available to us.  There were now 8 inches of ice out there.  Even the plowed farm paths were too icy.  My trailer was at home, down my 500 foot driveway which we had not plowed all winter.  So yet another break in work…and another comeback.  I hitched rides to trailer to a nearby indoor twice and when the weather broke this week I was ready to work.  The ring was still partially icy.  On a couple of the warm days the barn had a snow stomping rides. 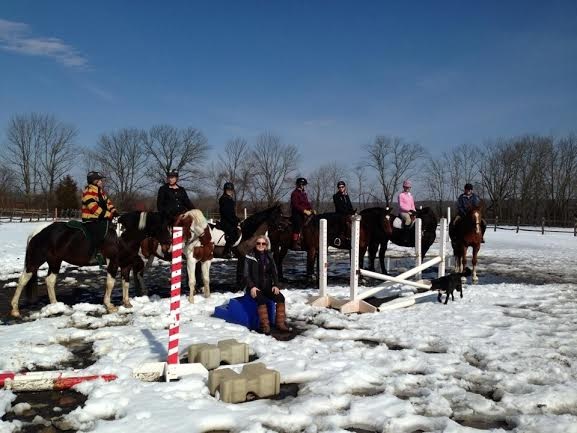 With continued melting about two-thirds of a circle was clear.  So Sunday when it was near 60 degrees I hand shoveled the other third and rode in the circle.  Tuesday when I brought Viggo in from the field I could tell he was having a bit of spring fever.  In his stall he walked away from me when I went to brush him.  While I was getting my tack, he squealed and spun in his stall.  Oh my, one of those days.  OK stick with the plan.  I walked him in hand around the farm paths, requiring obedient turns and changing the pace of the walk.  He started to sigh.  I put him on the lunge in the driest part of the outdoor and he listened.  Though upward transitions are still a little exciting for him; I mean he is only 17.  And then I mounted up.  He was wonderful.  He did have to test me by blowing through the outside rein but I did not allow it and he gave that up.   Of course we have a long way to go for both of our fitness and remembering all those niggling dressage details.  But for now weeee’rrrrreee baaaaack!

PS If you see us at an event this summer and we are in the warm-up doing our in-hand work, now you know why.  Sorry for the inconvenience!