Abby Powell is a Massachusetts native who commutes through Boston each day for work. Competing at the Beginner Novice level herself, Abby lives vicariously through upper-level event riders by watching four-star events — including the Olympics. When the bid for Boston to host the 2024 Summer Olympics became official, Abby decided to do some research into the potential equestrian sites, and she was kind enough to share her findings with us. You can read more from Abby on her blog, The Maggie Memoirs. 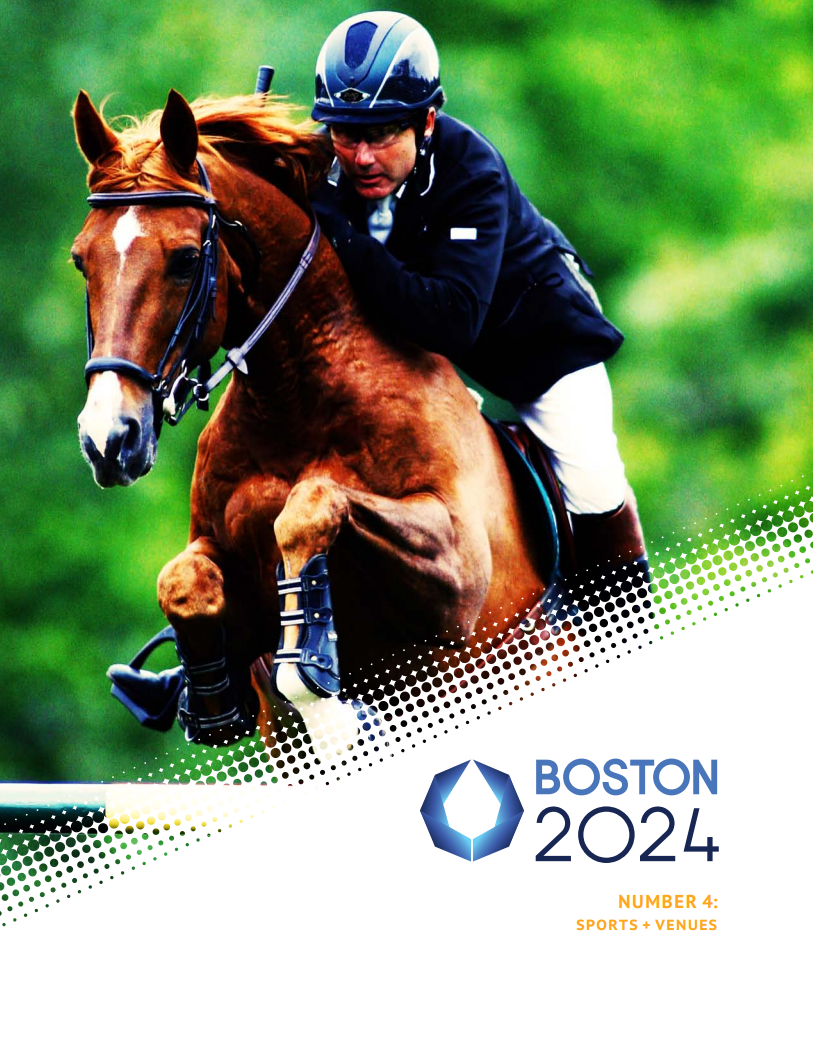 A little while ago the “Bid Book” that was presented to the United States Olympic Committee that Boston put together to ultimately win the US’s bid was released to the public. Today I want to explore what the venues for the equestrian events for the 2024 Olympics – should Boston ultimately win the bid from the International Olympic Committee – be like.

Franklin Park is public land that lies roughly 5 miles south of Boston. White Stadium in Franklin Park is listed as an existing venue capable of hosting the Equestrian Events and the Modern Pentathlon. No venue option #2 is listed. It is suggested that the current capacity of 10,000 would be doubled to hold 20,000 total by the time the games are held. 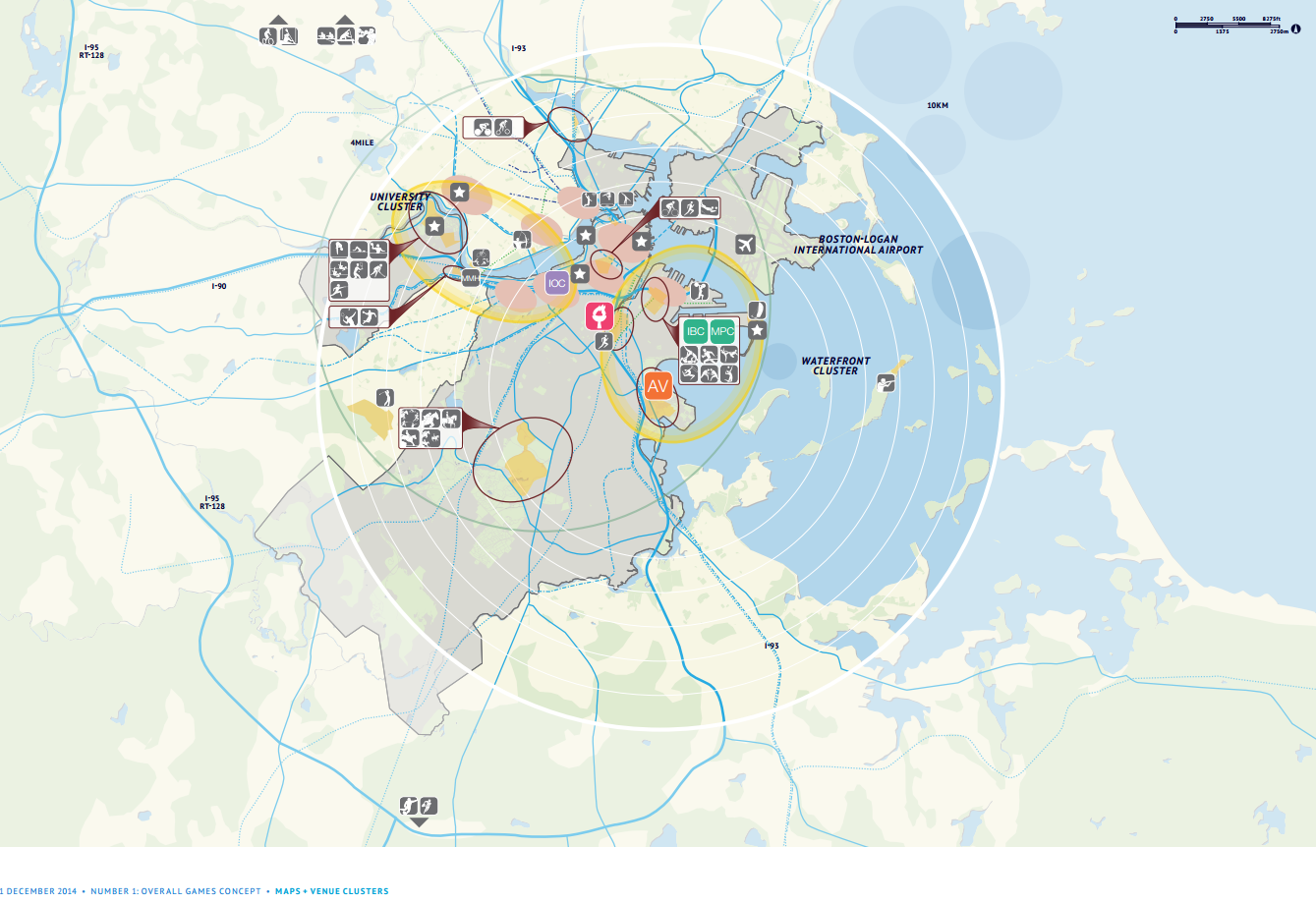 White Stadium is a permanent structure that is currently home to football and track and field for the Boston Public schools and it is already slated to undergo renovations and improvements over the next 2 years. After accommodating the dressage and jumping competitions I presume it would most likely return to an athletic field for the school system after the Games.

According to Bid Book Number 1: Overall Games Concept, the cross country portion of the eventing competition would be laid out on the existing land of the William J. Devine Golf Course, which is the second oldest public golf course in the country.

The golf course has varied terrain, water and viewing areas already established. While I’m sure golf fanatics are positively cringing at the thought of horses galloping across and digging up their nicely manicured greens, the bid book lists the cross-country course as a temporary venue. 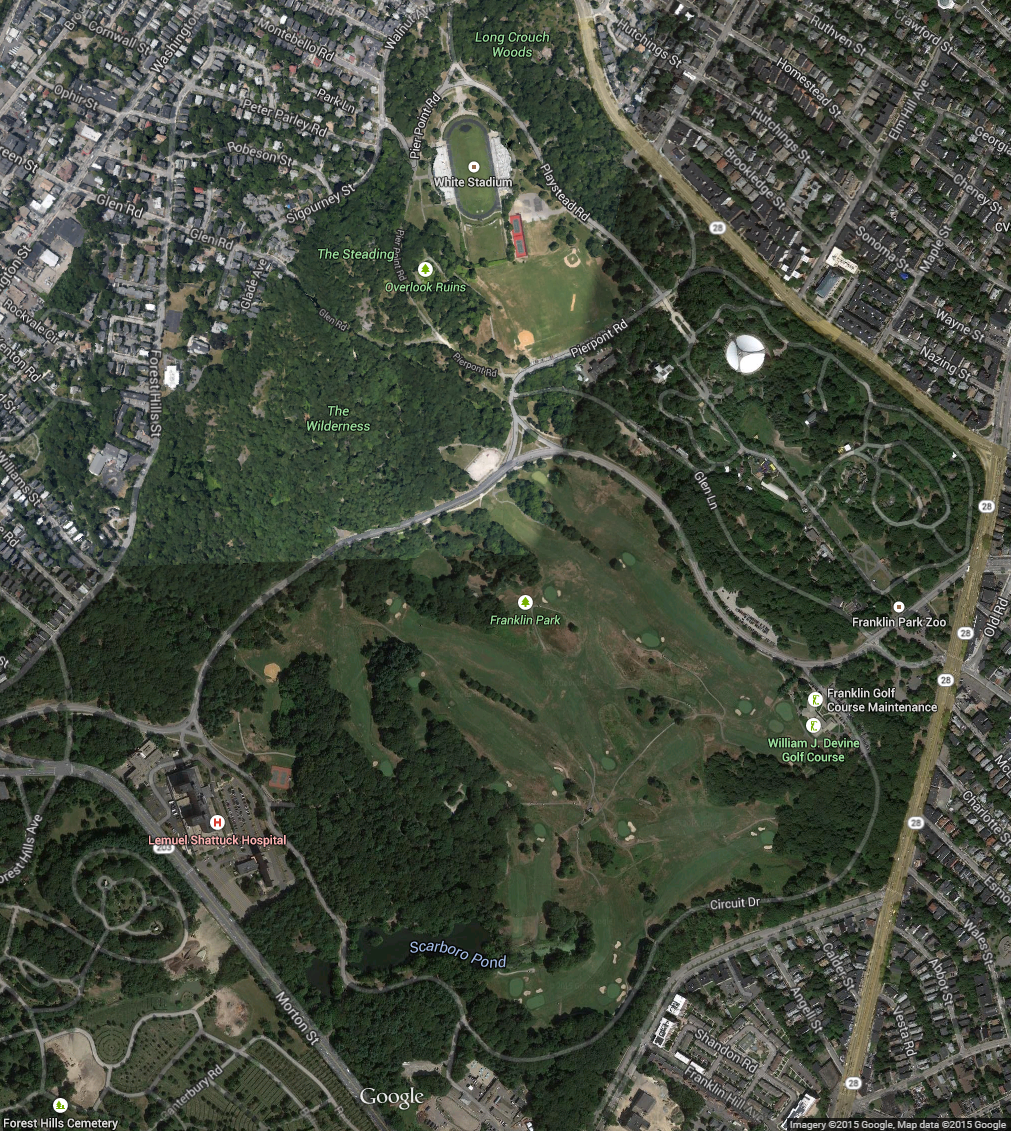 Screenshot from Google Earth. White Stadium is in the top center of the image, while the William J. Devine Golf Course is in the center lower portion.

Describing the course as “currently in need of reinvestment,” the book states that the golf course will be rebuilt after the Olympics have concluded.

Initially, the thought of the equine event venues being disbanded after the Games are over was disappointing to me. As a local, I would love to have world-class equestrian facilities so close to me.

I envy those in other states such as Kentucky, Texas, Georgia and North Carolina that have established horse parks that routinely host awesome events. In fact, the Georgia International Horse Park is actually a result of the 1996 Atlanta Summer Olympics. However, I understand that the Boston 2024 Olympic bid places a lot of emphasis on land preservation as well as accessibility to all the events.

I’ve come to realize that restoring the park and golf course to their original states after the Olympics would be the right thing to do, given that it is the city’s largest park at 485 acres. I don’t live in the city myself – I live about 35 miles north and commute down for work – but the reason that I commute so far is that I’ve honestly never been a city person and don’t have the desire to be (it’s hard to be a city person AND a horse person.) 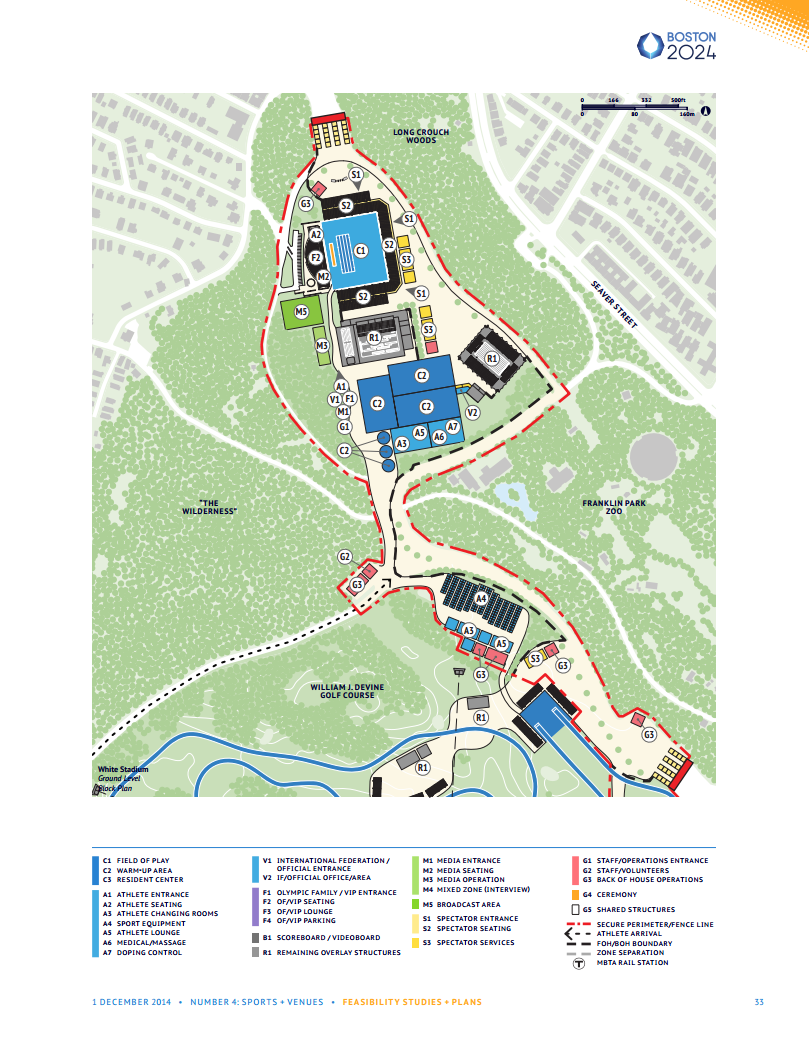 Potential layout of the White Stadium area for the dressage and jumping events.
Screenshot from Number 4: Sports + Venues, 2024Boston.org

I love open spaces and trees and I really see the value of bringing green space to cities. While it would be neat to have equestrian facilities so close to the city and so close to me, I think it’s important to give this space back when the Olympics are over so that the local population can enjoy the land for themselves instead of keeping for the use of equestrians, who comprise a comparatively small percentage of the population.

White Stadium is also the home to a free summer sports camp for kids ages 7 to 14. Taking that away from the community and leaving a permanent equestrian stadium would practically be a crime.

I was initially disappointed (and still am a bit) to learn that the equestrian events would not be held up near me, somewhere such as Groton House Farm or Bradley Palmer State Park. Groton House Farm is privately owned land and until 2009 they were the closest Area I event to Boston to host Intermediate and Advanced divisions (they only go through Preliminary now). They even hosted the Olympic Trials for the USET prior to the 1996 Atlanta Games.

The farm certainly has the land for a world-class cross-country course. However, the open space for a Grand Prix capacity stadium would be tough to find. The same space constraints for a stadium would be applicable to Bradley Palmer as it is a primarily wooded area. 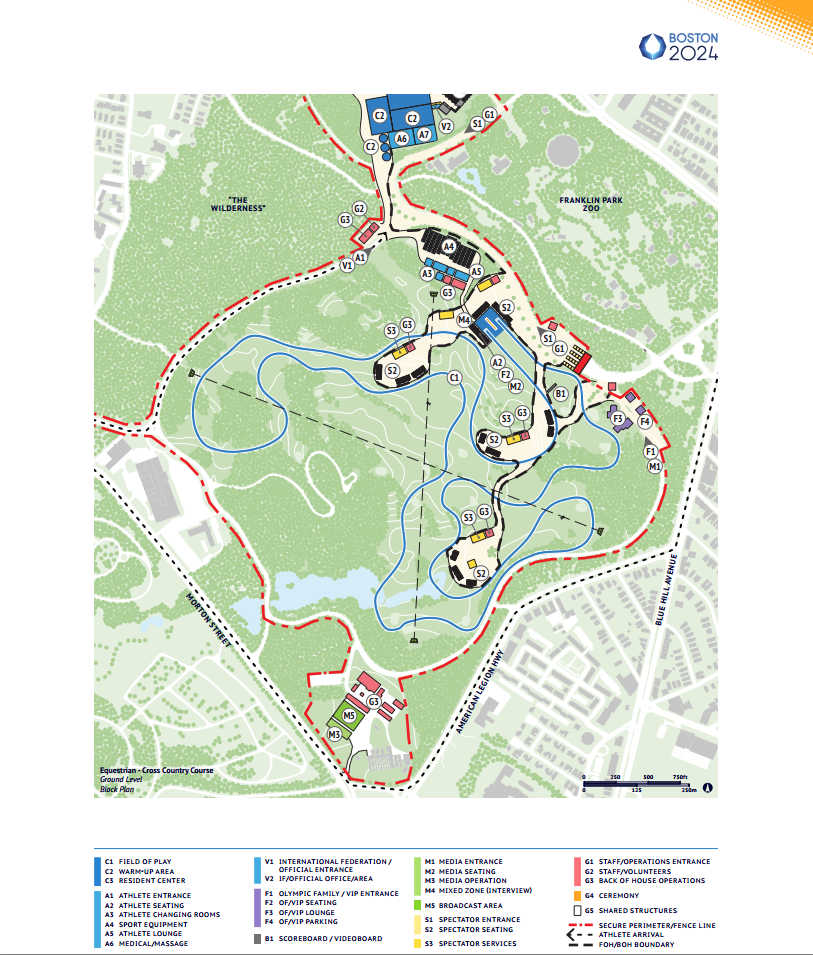 At 30 miles north of Boston, both Groton House Farm and Bradley Palmer State Park are too far away to be considered easily accessible. The sole mode of public transit that goes up that way is the same commuter rail line that I take to work everyday. Plus, the roads actually leading to these places are classic New England – narrow and winding.

A 2013 article in a local Hamilton-Wenham town newpaper actually quotes Ann Getchell, the owner of the Groton House facilities as saying, “I think it would be impossible to do something like [the Olympics] in a community like Hamilton.”

Having the equestrian events north of the city would not have been keeping with Boston 2024’s vision of a walkable Olympics. Placing the equestrian portion of the Games in Franklin Park keeps these events within 5 miles of the city proper and less than a mile walk from the Forest Hills Station (Orange Line) subway stop. Plus it would bring equestrian sports closer to the city than they have probably ever been before, thereby exposing these sports to an audience of people who may never get the opportunity to witness them. I think that is a very valuable thing.

So (as if it matters to anyone on the Boston 2024 committee) I approve of the location for equestrian events. It took me a while to come to that conclusion because I wanted to do a bit of research about it on my own first before I judged it, but I think I understand their reasoning pretty well for picking this location.

Frankly, as long as I can get tickets or volunteer or something, I’ll be a happy camper! That is, assuming this actually becomes a reality! We’ve got a long way to go yet.